Listening to those being served

Kitchener's House of Friendship celebrates 75 years of listening and serving 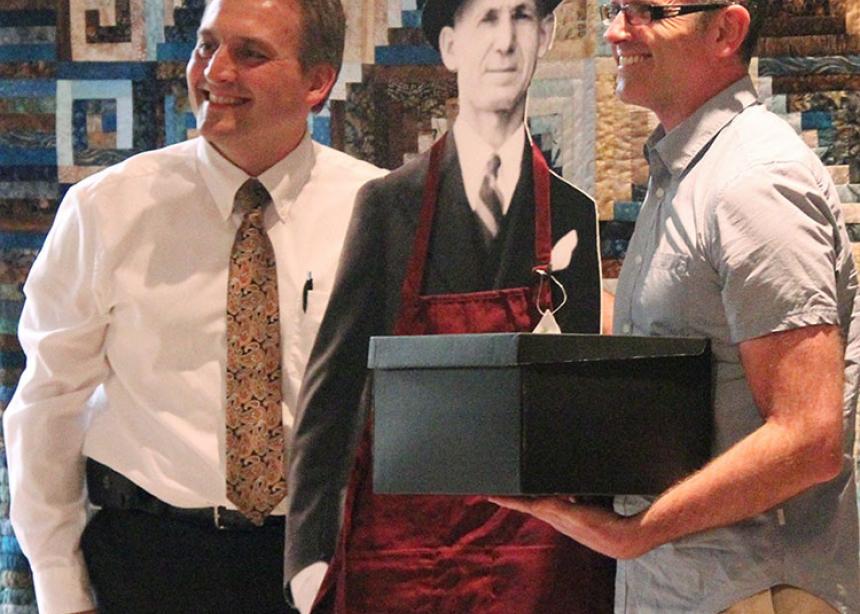 Executive director John Neufeld, left, and board president Trent Bauman stand with the Joseph Cramer cut-out at House of Friendship’s 75th annual meeting on June 17. Behind them is a quilt designed by Judy Martin and sewed by Arlene Martin, to be auctioned off to help fund House of Friendship.

When John Neufeld took the reins as director of Kitchener’s House of Friendship (HoF), he was confused by the 19 separate programs it was running: shelters, a food bank, addiction programs, a youth program, work in community centres, and on and on. How to make sense of it all?

To try to understand, he started reading Ferne Burkhardt’s 1989 book, A Mighty Flood: The House of Friendship Story. There he found the stories of the beginnings of the programs he now directed. In each case, a program was developed in response to some group expressing a need that no one else was meeting, a need which HoF and its supporters thought they could tackle. Less an organization following a flow chart, HoF is an organic entity, growing as space and resources become available.

That was true in 1939, when the doors first opened. Joseph Cramer, a Jewish Christian immigrant from Ukraine, was hired as HoF’s first director by an ecumenical group that included many Mennonites, to oversee a shelter for men—hobos and immigrants—seeking work. The original impetus came from an ecumenical women’s Bible study group concerned with these homeless men.

A recent visioning process has underlined the need to keep on listening to those being served. Just because a program has been around for a long time does not mean it continues to meet needs. Two programs—Live and Learn for women and children, and the Kiwanis House for youth—have recently been terminated because they did not mesh with HoF’s strengths or core mandates of housing, food security, addiction and mental health services.

Programs were evaluated as to whether they are actually helping, or perhaps perpetuating the need. With the recent government-run study that showed that “shelter first” was an important way to help homeless people, an overwhelming proportion of whom suffer from addictions and mental health needs, HoF has seen its government support continued.

But Trent Bauman, board president, and Neufeld are concerned that, along with this support comes a government-mandated push to work more exclusively with the very ill and addicted. HoF has worked at having a balance of higher- and lower-need clients in its residences to begin to build community, rather than being only a serv-ice centre.

Bauman thinks that society has changed over the past 75 years. People are more willing to share about their needs and those needs are not only “out there,” but in the churches as well. Mental-health needs are no longer taboo to be discussed, he says, noting the recent death by suicide of Robin Williams.

The visioning review also challenged HoF to stop being “the quiet in the land,” and to do more advocacy work. Trusted in the community by both donors and governments, the report said that HoF needs to speak more about how society makes things worse for some members of society and how those needs can be alleviated.

At its annual meeting on June 17, the one-person drama, Myra’s Story, depicted an Irish street person dependant on hand-outs to support her addiction to alcohol, painting her as a person with a history of pain and loss leading to mental illness, rather than a problem to be hidden away or solved.

According to Bauman and Neufeld, HoF continues to find strong support, both financially and with volunteers, in the local church community. But such support also comes from the wider community and other religious groups. A significant portion of the food handed out by HoF is halal, fit for the immigrant and refugee Muslim users of HoF’s services.

Neufeld believes that by listening to those served—residents in housing, participants in addiction programs, women in shelter and food bank users—HoF has a long future ahead, citing a recent capital campaign to house all of the women’s programs under one roof that did not result in a decrease of donations to other programs. 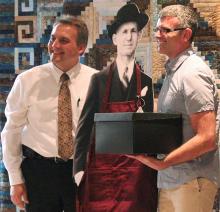 Executive director John Neufeld, left, and board president Trent Bauman stand with the Joseph Cramer cut-out at House of Friendship’s 75th annual meeting on June 17. Behind them is a quilt designed by Judy Martin and sewed by Arlene Martin, to be auctioned off to help fund House of Friendship.