Listen to the ‘wild goose’

Soon, it will cross the ocean. In 2011, the family-friendly Greenbelt—under the name Wild Goose Festival—is being planned for North America.

The first Wild Goose Festival will tentatively take place near Kansas City, Kan., next summer. The festival is meant to be North American and will probably move to different locations each year, including Canada. Wild Goose will feature speakers like Ched Myers, Jim Wallis, John Bell, Brian McLaren and Shane Claiborne, and have major involvement from the African- American and aboriginal North American communities.

Wild Goose’s draft mission statement focuses on inclusivity and on the development of a radical community of grace, joy and peace, which will seek to change lives and bring God’s healing and hope to the world. Some of the festival’s ideas and language are used in the North American Mennonite church’s “Vision: Healing and hope” statement.

In its early years, Greenbelt had a strong evangelical flavour, both in music and talks, but one voice in particular pushed the social action agenda that became a key component of Greenbelt’s character. That voice belonged to Graham Cray, Greenbelt’s first chair, who was a regular visitor at the London (England) Mennonite Centre in the 1970s and ’80s, and a close friend of Alan and Eleanor Kreider, the centre’s directors at the time. With Cray’s encouragement, early speakers at Greenbelt included Ron Sider, Jim Wallis, Tom Sine and the Kreiders.

Musicians like Cliff Richard, Larry Norman, Graham Kendrick, Garth Hewitt, Sheila Walsh and Canada’s own Bruce Cockburn helped Greenbelt to witness phenomenal growth during its first 15 years. In 1981, a relatively unknown rock band from Dublin, Ireland, informed the Greenbelt organizers that “God told us to play at Greenbelt.” Thanks to Cray, U2 performed a 20-minute set.

Greenbelt’s mission is to “re-imagine the church as an infectious global conspiracy, working for God’s peace, healing and friendship in previously unimagined ways.”

Rowan Williams, the Archbishop of Canterbury, describes Greenbelt as “an increasingly important gathering for those finding it impossible to animate their faith journeys inside conventional church settings.”

And Cockburn has said it was “the closest thing I’ve got to a church. There is a sense of community built around a worshipful intent and a shared understanding of the need to question in the context of faith.”

Vic Thiessen was director of the London Mennonite Centre from 2002-09. He is now the executive secretary of support services for Mennonite Church Canada. 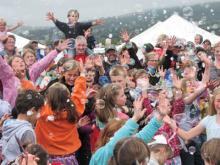