Listen to the unjust judge 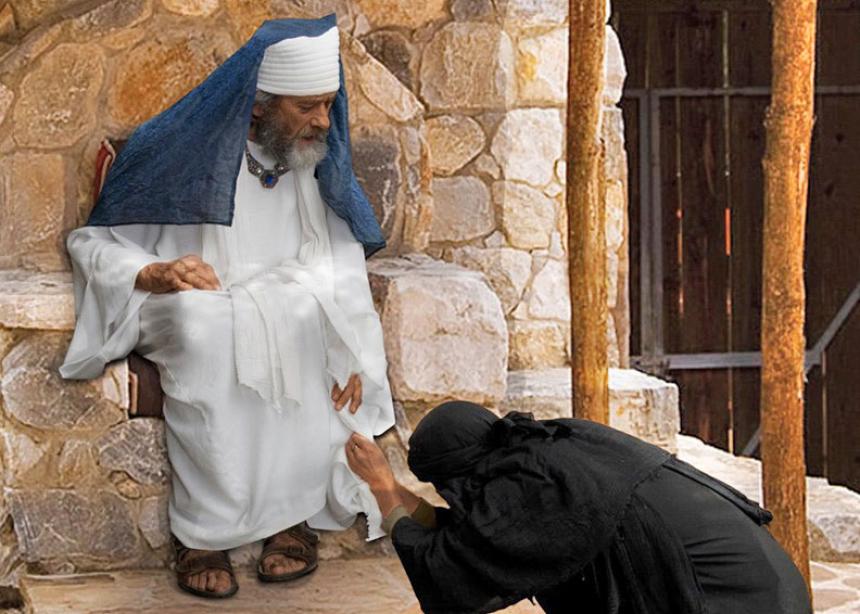 When I first read this passage in Luke’s gospel, in preparation for preaching on it, I thought, “Oh, this is just too easy.” Unlike some stories which leave you scratching your head, this one seems all too straightforward. If even an unjust judge listens to a persistent widow, how much more will God—a just judge—listen to our cries?

“Then Jesus told them a parable about their need to pray always and not to lose heart. He said, ‘In a certain city there was a judge who neither feared God nor had respect for people. In that city there was a widow who kept coming to him and saying, “Grant me justice against my opponent.” For a while he refused; but later he said to himself, “Though I have no fear of God and no respect for anyone, yet because this widow keeps bothering me, I will grant her justice, so that she may not wear me out by continually coming.”’ And the Lord said, ‘Listen to what the unjust judge says. And will not God grant justice to his chosen ones who cry to him day and night? Will he delay long in helping them? I tell you, he will quickly grant justice to them. And yet, when the Son of Man comes, will he find faith on earth?’” (Luke 18: 1-8).

Not that I have any problem with the advice to pray without ceasing and not lose heart. I’ve been buoyed up by recalling these words many times. But there is something not quite right. If you “Google” the passage, like all good preachers do nowadays, you learn that we are to imitate the widow, be persistent and bothersome, and God—like the judge—will listen. Don’t grow weary in your prayers, for God will hurry to your side.

A nice thought, but there is a slightly dissonant tone in my head. Not only does its comparison of God with an unjust judge leave a bad taste in my mouth, but I realized that the picture of God rushing to bring justice to the oppressed doesn’t actually resonate with the world as I know it. The oppressed do continue to cry out, and justice is not always quick to come. We are ardent in our prayers, yet sometimes they go unanswered.

When that happens, we can be left with some uncomfortable conclusions. Perhaps we weren’t praying hard enough or faithfully enough. Perhaps we aren’t worthy enough or loved enough by God. Maybe God just doesn’t care or we deserve our calamity after all. Or, as more and more finally conclude, maybe God doesn’t exist at all.

Irving Greenberg, an American rabbi, author and educator, wrote after the Holocaust: “No statement, theological or otherwise, should be made that would not be credible in the presence of the burning children.” To take his words seriously, I have to wonder whether it is credible to tell those perishing in the thousands of hells we’ve made manifest on earth, “God will listen if you only pray without ceasing. God will bring justice soon.” The truth is, millions go to their graves without ever seeing this promise arrive.

But what if this isn’t the promise God is making? I decided to put the books and Google searches aside, and spend a week or so just contemplating and meditating on this ancient story. In the contemplative practice of Lectio Divina, we are invited to “pray” the text by observing what grabs and holds our attention, and then to linger there. When I approached the parable in this way, what stood out right away was Verse 6: “And the Lord said, ‘Listen to what the unjust judge says.’ ”

This made me curious. Why is it that Jesus suggests we listen to him? The more I stayed with these words, the more I began to hear an unsettling familiarity in those words of the judge. They don’t sound like God; they sound like us.

Martin Luther King Jr. once said, “Freedom is never voluntarily given by the oppressors; it must be demanded by the oppressed.” Perhaps Jesus is making a similar point: This persistent widow, powerless in her time and place, without a formal voice in a court of law which only gave official voice to men, nevertheless achieved justice for herself. She is a powerful example of the old Quaker adage, “Speak truth to power.”

The judge isn’t actually being “unjust” in his treatment of the widow, not at the time the parable was spoken, at least. Justice in ancient Israel was a relational term, not primarily a legal one, as it has become in our time. To be “just” was to fulfill the expectations of a particular relationship. A parallel term in the Hebrew Bible was “righteous.” In fact, many translations of Luke’s story name the judge as the “unrighteous judge.”

As far as the widow was concerned, the judge did fulfill his proper responsibilities. He had no legal reason to listen to her. The widow didn’t have any legal voice in the courts; only her male relatives would have had that right. To actually listen to her in the end would have been a completely unnecessary requirement under the law of the day.

So what was it that made the judge unjust or unrighteous? Which requirements of what relationship was he not fulfilling? The answer lies in the first two descriptors of him: that he neither feared God nor respected people. He may have followed the letter of the law, but he violated the primary commandment to love God and his neighbour as himself. He was in violation of the covenant between God and the people of Israel. The underlying issue was not legal, but covenantal.

Perhaps we should listen to the unjust judge because we are like him. While being just before the laws of our land, we have been unrighteous before God. Our ancestors followed the letter of the law as they settled on indigenous land stolen through broken treaties. Immigration laws are only being upheld when would-be refugees are sent back “home” to abject poverty and exploitation. And no laws are being broken when we purchase cheap goods at rock-bottom prices made by children in sweatshops in Bangladesh.

But have we loved God and our neighbour as ourselves? We may be just before the law, but the sorry truth of both past and present, including the Mennonite church, is that we have not always listened to the cries of the weak because we’ve decided that they ought to have no voice. Or when their relentless cries for justice do finally start to be heard, we do not know what to do, how we could possibly live differently, what responsibility we might actually have. And so too often we do nothing.

Perhaps Jesus wants us to listen to what this judge says, not because he serves as a counter-example to God, but because he serves as a counter-example to us. I can imagine Jesus saying, if a judge who doesn’t love God or neighbour eventually listens to the cries of the voiceless, how much more should you, who claim to love God and neighbour, do the same!

Listen to what the unjust judge says. Be like him. Listen. Change.

And there is even yet another possibility, now that God is freed up from being linked to the unjust judge. Perhaps God does appear in this story after all, dressed in the widow’s garments. This actually makes more sense, considering that this is an upside-down kingdom we are talking about.

God is “she with no voice in the world,” the One the world rejected and spurned. Yet God is also “she who does not give up,” even on those of us who have no fear of God nor respect for people. God continually comes to us, again and again, until we are worn out and relent . . . and repent.

That is what it means to be a cove-nantal God and to be faithful to that covenant. It means coming back for us even when we’ve broken the covenant a million times, and will a million times more. What good news it is indeed that, no matter how long it takes before we do what is right in the eyes of God, we will not be abandoned to our own hardness of heart. Isn’t it on that very hardened heart that the new covenant has been written?

Could it actually be that the unjust judge is an example of what the prophet Jeremiah was proclaiming five centuries earlier?

“Behold the days are coming . . . when I will make a new covenant with the house of Israel,” God says in Jeremiah 31. “I will put my law within them, and I will write it on their hearts; and I will be their God, and they shall be my people. No longer shall they teach one another, or say to each other, ‘Know the Lord,’ for they shall all know me, from the least of them to the greatest.”

The unrighteous judge may have been the least of them, or may have been the greatest. Either way, even he knew the covenant of God written on his heart. It moved him to do the will of God in the end, to do justice even when the law didn’t require it.

Luke was right. We are to pray unceasingly and not lose heart, but not because by doing so God will finally weary of our incessant cries and grant us our wish. Rather, it is because God has placed the seal of the covenant in our hearts and in the hearts of all people. Our constant prayers do not convince God to get with the program, but they do put some cracks in our resolve not to. Regardless of how much lack of awe and love there is for the Holy One, no matter how absent is respect and regard for our fellow created beings, God does not delay long over us.

God comes as the widow, continually, without rest, never ceasing in calling for an end to oppression and ruin, until even the hardest of hearts stirs. Even if it is only because God is a bother and is wearing us out, the covenant has been placed in our hearts and the Word of God will not rest until it accomplishes what it was sent to do.

So pray without ceasing and don’t lose heart. For as Martin Luther King Jr. preached, the determined widow knew and God has promised, “The arc of the moral universe is long and bends toward justice.”

Adapted from a sermon preached on Oct. 20, 2013, by Anita Fast at Langley (B.C.) Mennonite Fellowship, of which she is a member. 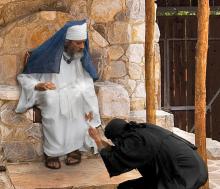 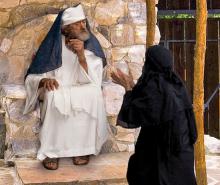 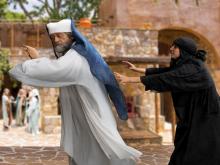 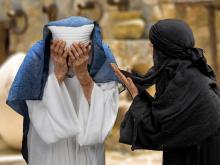 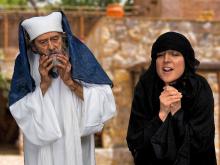 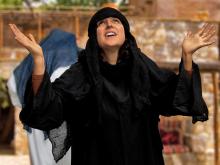 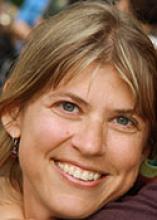