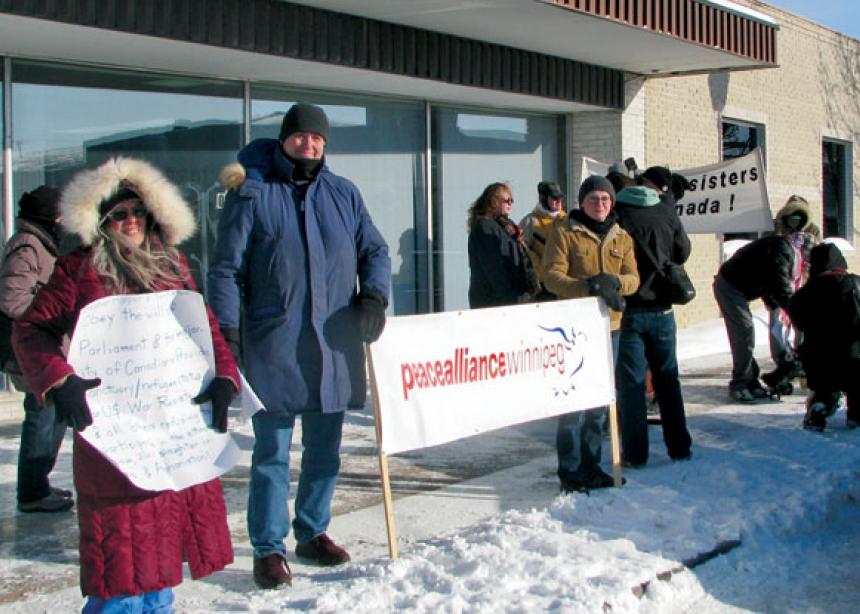 The Steinbach office of Canadian Public Safety Minister Vic Toews was the scene of a mid-January rally in support of American war resisters seeking asylum in Canada that took place in the wake of the defeat of Bill C-440.

The bill would have prevented war resisters—people who had voluntarily joined the military, but who later refused combat roles and applied for conscientious objector (CO) status—from being deported and would have allowed them to seek permanent residence in Canada.

The Steinbach rally, part of a nationwide initiative, involved Project Peacemakers, the Keep Resisters in Canada Campaign, Peace Alliance Winnipeg, the Council of Canadians and Joshua Key, himself a war resister.

According to Key, there were atrocities happening to the innocent people of Iraq at the hands of the American military that he did not want to participate in. “I didn’t want to be a part of it no more,” he said on the War Resisters Support Campaign website.

Two American war resisters who sought refuge in Canada have recently been deported to the U.S., where they have been incarcerated.

For Michael Bueckert, the program coordinator of Project Peacemakers who attends Hope Mennonite Church in Winnipeg, the Let Them Stay rally was an opportunity for him to stand in solidarity with war resisters in both his professional and personal capacities.

“A large portion of [Project Peacemakers] membership is from the Mennonite community who have a history of resisting in the Second World War,” Bueckert, a self-proclaimed Mennonite, said. “We have fought very hard for the right to be COs. It is important to support others in a similar struggle.”

“Personally, I don’t think it is right to punish people who have stood up for the same values that I hold,” he added.

At the rally, the group delivered a letter to Toews that requested an emergency meeting with him and other Members of Parliament.

In the letter, Cheryl-Anne Carr of the Keep Resisters in Canada Campaign stated that the Iraq War is illegal and, that by deporting resisters, Canada is supporting an illegal war. The letter was an invitation to exchange views and information. She believes that the deportation and imprisonment of war resisters is a situation in dire need of attention, claiming those sent back to the U.S. are treated cruelly for their beliefs.

According to Bueckert, Toews has yet to respond to the request for a meeting. 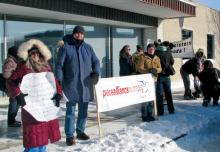