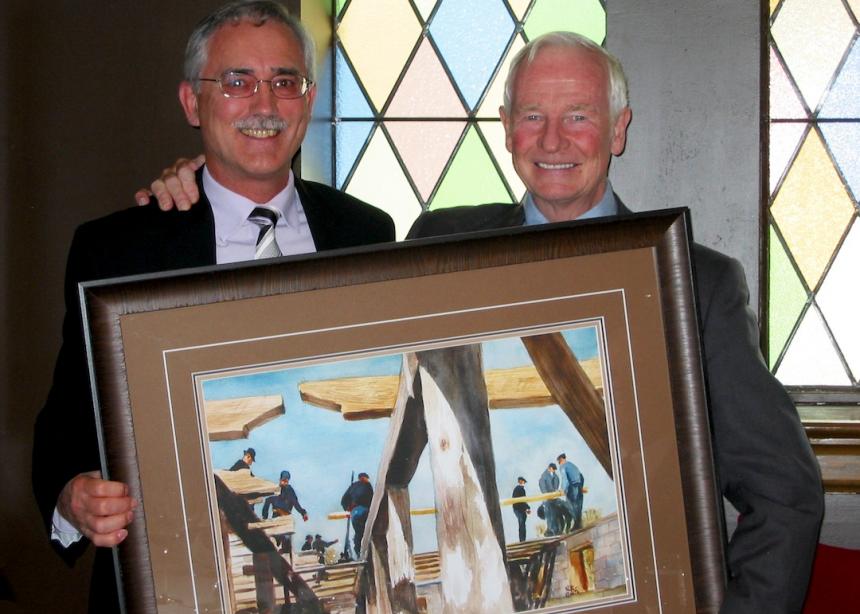 David Johnston began his first day on the job as Governor General by telling Canada about Mennonites, Blackberrys and the students that marked his time back in Waterloo Region.

In a speech in the Senate chambers before an enthusiastic crowd of former prime ministers, Supreme Court judges, cabinet ministers and lieutenant governors, the former University of Waterloo president said he accepted his new duties with joy.

He honoured his family, but also Waterloo Region, which he said gave the country models for innovation and community cooperation.

“We want to be the smart and caring nation,” Johnston said in his first official address, as part of a grand ceremony on Parliament Hill.

“A society that innovates, embraces its talent and uses the knowledge of each of its citizens to improve the human condition for all. When we set our sights together, we can do better and inspire each other to achieve great things.”

With his wife Sharon at his side, Johnston spoke of his vision for a country where all Canadians have access to higher education, and of the need to cherish teachers. He said he wanted to be a bridge to the next generation, saying he felt privileged to have spent so much of his life around students.

When he spoke about Canada’s need for innovation, he pulled his Blackberry out of his pocket, waved it, and nodded at Research In Motion co-founder Mike Lazaridis, who sat in the Senate chambers.

“We need to think of the kind of innovation that made Blackberry a household name,” he said.

Growing up in Sudbury and Sault Ste. Marie, Johnston said he learned the value of neighbourly cooperation and volunteerism. He said he sees that still in the rural community around his St. Clements-area horse farm.

“I see examples of this coming-together in the farming neighbourhood where we live. A Mennonite barn-raising with people gathering on the scaffold of a new barn, bringing their diverse talents and energy to help a neighbour in need,” he said.

Johnston strayed from his script a few times, telling the story of his hockey coach at Harvard, a man who had a Grade 10 education but still inspired his ivy-league charges. He strayed again when he talked about the importance of his family, including his wife of 46 years — who went on her first date with him at 13 — and his five adult daughters.

Sharon brought some levity to the ceremony when she leaned forward to fix his jacket as Johnston climbed into the large red chair at the front of the Senate chamber. Then she bowed, stepped up and kissed her husband, prompting laud applause from the chamber.

Johnston called her “my best friend, my inspiration, and the wind beneath my wings,” he said.

He gave his grandchildren a ride they won’t soon forget, too.

As Mounties led his black carriage on its slow ride along leafy Sussex Drive, which was bursting with the oranges, yellows and reds of fall, “Grandpa Book,” stopped the landau to let them climb aboard for the approach to Rideau Hall.

Prime Minister Stephen Harper told the assembled dignitaries that Johnston was a “great Canadian” and a man of “remarkable intelligence and exceptional character.”

He said Johnston was driven by duty — to his family, his community and his country. And he had a little fun with Johnston’s hockey roots at a prominent institution south of the border.

“In the early 1960s, he captained Harvard’s hockey team and was twice elected first team All-American. So, I guess when it comes to hockey, the best all-Americans are actually Canadians,” he said, provoking laughter from the chamber.

Johnston also showed some of his trademark humour during his installation, winking at friends and acting surprised as he walked into the Senate chamber. When presented the Great Seal of Canada — a tempered steel stamp that has been used since 1952 in honour of Queen Elizabeth — he said, “Oh, you want me to give it back?”

Johnston said he and his wife wanted to get to know Canadians from all walks of life.

One of his first symbolic gestures was to invite 143 war veterans and youth leaders — one for every year of confederation — to greet him before signing the proclamation that marked his accession.

On Wellington Street, across from Parliament Hill, the couple made a short, symbolic detour, stopping the procession in front of the National War Memorial cenotaph and laying 26 roses on the granite slab of the Tomb of the Unknown Soldier.

The roses had been given to them by representatives of the 13 provinces and territories – another gesture Johnston proposed to involve Canadians in his installation.

As four black horses pulled his carriage away from the war memorial, Johnston was still grinning from ear to ear. Spectators ran to line his route, waving and cheering and taking photos.

Johnston ended the day’s formalities with a private reception in the ballroom at Rideau Hall, the 172-year-old state mansion that will be his home for the next five years.

It’ll be an opulent, stately contrast to their beloved Chatterbox Farm, the 100-acre horse training facility that has been the couple’s home in recent years.

Earlier, when Canada’s new Governor General emerged from the doors under the Peace Tower, he paused briefly and appeared to soak in the cheers and whistles from a crowd of onlookers.

With a bank of cameras following his every move, he inspected an honour guard representing the three branches of the Canadian Armed Forces, while an artillery regiment fired 21 blasts of cannon in his honour.

In their wake, one man shouted from the crowd at the top of his lungs. 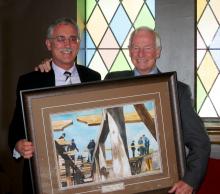