Lessons from the West Bank 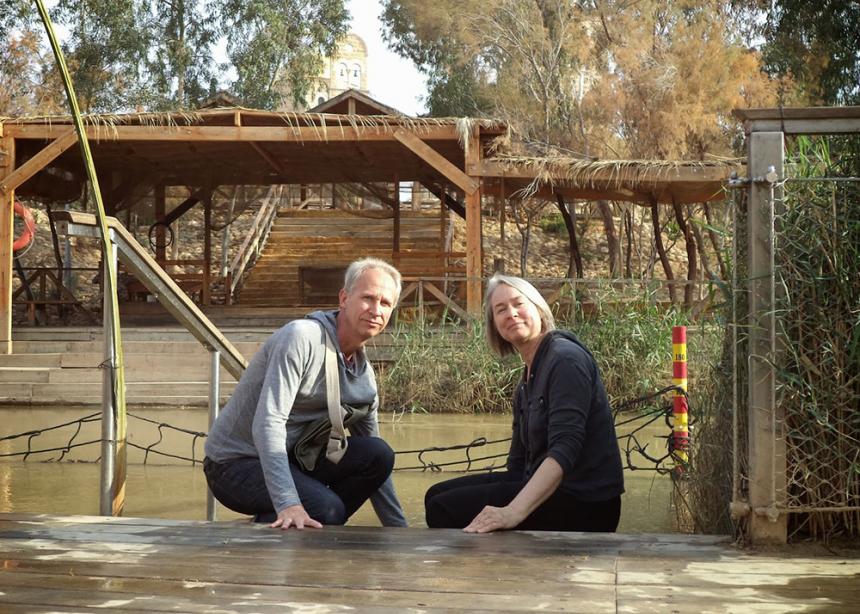 It isn’t easy to distil six months of life in the Holy Land into an hour’s conversation. This is evident in the way Jerry Buhler searches for the right words and sometimes stops to rephrase what he’s trying to say. He and his wife Kara recently returned from a six-month voluntary assignment at Bethlehem Bible College under the auspices of Mennonite Church Canada Witness.

Bishara Awad founded the college in 1979 in response to a need for leadership training within the Palestinian Christian church. With about 150 students at three sites—the main campus in Bethlehem, Galilee Bible College in Nazareth, and a virtual campus in Gaza—the college offers programs in biblical studies, tour guiding and mass media.

Kara’s job as a library assistant was the official placement under which the Buhlers travelled to Bethlehem. The college’s library serves students and staff with its predominantly theological collection, and the general public with a selection of fiction, non-fiction and children’s books. Donated English-language books make up about 80 percent of the collection. Kara spent most of her time cataloguing these books while her supervisor focused on the Arabic-language collection.

The assignment served as a sabbatical for Jerry, who is area church minister for MC Saskatchewan. Much of his work involved driving. The college’s mail goes to a Jerusalem postal address, since mail delivery in Palestine is not reliable. Banking is also done in Jerusalem. Because Palestinians are not allowed across the border into Israel, the college relies on volunteers like him to pick up mail and do the banking. He also drove to the Tel Aviv airport to pick up or drop off passengers. In addition, he helped write and edit the college’s English-language newsletter and worked in the campus guesthouse.

The Buhlers’ daughter Laura accompanied them to Bethlehem for the first three months of their stay. Her role was as administrative assistant to Alex Awad, director of the Shepherd’s Society, the charitable arm of the college, and a brother to the college’s founder.

Among the things that made a lasting impression on the family was “the immense beauty of the country. . . . We were just astounded by the terrain,” says Jerry, noting that the lush growth of plants and trees, and “the constant blooming of this or that,” helped them understand why people have fought over the land for millennia.

Political realities also made a lasting impression. Palestinians are aware that North American media portray them as terrorists and their homeland as a place fraught with violence, he says. They would like North Americans to know the stereotypes are not true.

“If there is anything we feel they would want us to bring back, it’s, ‘Come, see how it is here really,’ ” he says.

Kara agrees, saying in a phone interview that her experience in the Middle East taught her to “resist the notion that all is violence.” Although within walking distance of the wall dividing Israel from the West Bank, the Buhlers never felt endangered, even when walking the streets at night.

Nevertheless, the myth that the area is unsafe is perpetuated. For instance, while Bethlehem is a popular tourist destination, most tours begin and end in Jerusalem. Tourists are driven to the Church of the Nativity or to Shepherd’s Field and then whisked away, their guides telling them it’s not safe to stay in Bethlehem. Tourist dollars are diverted to Israel and Bethlehem’s economy remains depressed.

There are parallels between such stories from the West Bank and stories from the first nations here in Canada. In both cases, people experience a need for validation. Jerry recalls hearing Palestinians talk about their “existence” in a way that struck him as weird, but not unlike that expressed by this country’s indigenous peoples: “When there’s been a systematic attempt to get rid of you as a people, how can you help but question your existence.” While he says he has always encouraged dialogue between Mennonite churches and their indige-nous neighbours, he will do so now with enhanced awareness.

Another lesson that will likely impact his work as area church minister is what it feels like to be a newcomer in a place where everything is unfamiliar. In a sense, said Buhler, “we were pretending . . . because we knew we would be coming home,” but for those who must learn a new language and adapt to a new culture, the challenges can be overwhelming. For that reason, he says, “our sensitivity to newcomers is very important.”

In all likelihood, other lessons will also become part of the distillation process in the coming months as Jerry and Kara recall their time in Bethlehem and share it in conversation with others. 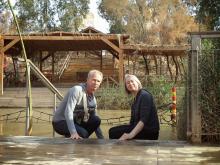