Lessons from those who left 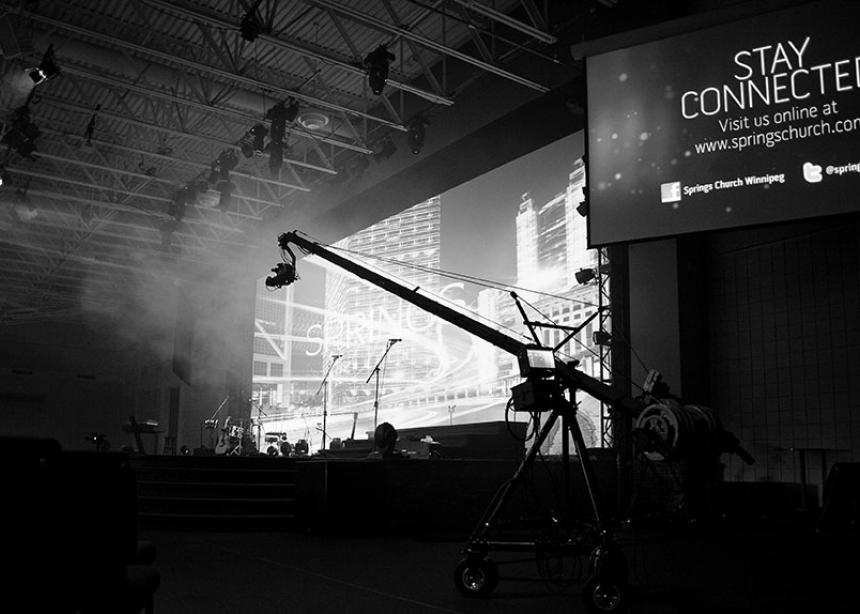 Springs Church in Winnipeg is one of Canada’s most successful and success-oriented mega churches, where an ex-Hutterite, Phil Kleinsasser—his suspenders, beard and plaid long gone—serves as an assistant pastor.

Phil Kleinsasser urged the faithful to "sow" their money in the offering plate in order to “reap” abundance in all areas of their lives. Kleinsasser, of course, is a Hutterite surname, but his admonition came not in an austere colony chapel, but at Springs Church, one of Canada's most successful and success-oriented mega churches, where Kleinsasser—his suspenders, beard and plaid long gone—serves as an assistant pastor.

That was the image with which Kate Bowler, a professor at Duke Divinity School and author of Blessed: A History of the American Prosperity Gospel (Oxford, 2013), began her presentation to the "Ex-Mennonite / Near Mennonite" Conference hosted in October by the Chair in Mennonite Studies at the University of Winnipeg.

Bowler estimates that ex-Anabaptists form the largest ethnic minority in the well-padded pews at Springs, even though the church could hardly be less Anabaptist, with its rock star pastor up front and holy Starbucks look-alike at the back. Actually there are five distinct "lounges" in the church, at least two of which "proudly" serve Starbucks, according to the Springs website. Bowler told of people who found an antidote to legalism, permission to embrace the ever-changing urban ethos, physical healing and acceptance of nose rings—in short, a place of belonging. “Love, accept, forgive” is a Springs motto.

I wondered what sentiment Bowler's presentation was evoking in the mostly Menno conference audience. Not surprisingly, one person asked a question that presumed Springs does little to help the disenfranchised. His critical inclination matched my own initial impulse to mentally shun.

My more considered response was to ask what posture we Mennonites assume, or ought to assume, in relation to other churches, other faiths, “the world” and those among us who opt for one of those paths.

The stories of those who leave us, either by choice or de facto banning, raise a more fundamental question:

As soon as a group identifies in some way, by definition it excludes certain people. A pacifist Mennonite church will not draw Catholic war vets. But if you make your boundaries too porous, as conference organizer Royden Loewen noted in a later interview, you run the risk of losing your centre and identity altogether. This is the dilemma of community and identity, played out in a thousand wars, reformations and excommunications, and in at least one Hutterite farmer-turned-mega church-minister.

How, for instance, do we identify as nonviolent without causing the pain experienced by the Mennonite Second World War vets who started Altona (Man.) United Church upon rejection by their Mennonite churches, as presenter Conrad Stoesz explained? How can we be distinct without being prideful?

Or perhaps distinction is the wrong goal. Paul Doerksen of Canadian Mennonite University, Winnipeg, said we are preoccupied with defining what a Mennonite is and what makes Mennonites distinct. He implied we should get over ourselves.

In a related presentation, Paul Martens of Baylor University in Texas, argued that, as part of a process of consolidating Mennonite identity around the things we do that make us different, a string of Mennonite heavy hitters—specifically Harold Bender, John Howard Yoder and J. Denny Weaver—have over-simplified the rich Anabaptist history into a narrow and very human-centred focus, which includes discipleship, "brotherhood" and the politics of nonviolence.

Martens takes the argument further, to say that this circumscribed focus has made Mennonite theology superfluous, but the more basic point, identical to Doerksen's, is that we should focus less on ourselves and more on God.

We're not as unique as we think. The Mennonite legacy contains many interconnected, organic layers, not just a few star tenets. And the starting point should be what God does, not what we do. Realizing this should make us more open to reach out over the “social chasm” that Loewen says tends to separate Mennonites from those who have left us.

The Mennonite tendency to stake out a unique identity is understandable. We are scattered across the globe in an era of dizzying change, held together by neither geographic nor administrative centre. No Pope. No Mecca. The pressures of assimilation—the ultimate enemy of distinctiveness—pull on us with a force as inescapable as gravity.

That's what makes the Springs case interesting. It is the apex of assimilation, with the possible exception of complete non-belief. (I missed the presentation by the Mennonite-turned-atheist). Anabaptist participation at Springs represents one logical conclusion of the gradual path of acculturation on which the majority of us—whether black bumper or buffed bumper types—find ourselves.

How do we respond? With defensiveness, judgement, fear, grace, openness?

If distinct identity is the bottom line, there is little to be said about Kleinsasser, or the esteemed Muslim leader Elma Harder, who spoke of her path from a Mennonite farm to Islam, other than that they are wrong. The conference, by its nature, invited a softer, more engaged response.

The original Anabaptists most certainly set themselves apart from the dominant religious practice of their day. But what they critiqued, in large part, was the claim made by a segment of the church to a corner on truth. They critiqued the blind guarding of a legacy.

Our calling is not to guard the Anabaptist legacy or claim theological high ground. Our history and character are gifts of God, but not ecclesial trump cards. We must be open to the gifts God has given others, which can serve as correctives for us.

To allow Yoder back into the discussion, we need to believe that weakness, not distinctiveness, wins. We must resist the urge to try to steer the Mennonite legacy toward a particular position or end.

After the one conference attendee asked the question about Springs' presumed neglect of the marginalized, Harold Janz, a Mennonite Brethren elder, gently encouraged us consider the mega church’s sizeable donations to Mennonite Central Committee and the admirable work it does in Winnipeg's personal care homes. He did not condone the prosperity gospel preached there, but he didn't let us get away with sitting too smug.

A number of the papers presented at the conference will be published in the 2015 Journal of Mennonite Studies.

Springs Church in Winnipeg is one of Canada’s most successful and success-oriented mega churches, where an ex-Hutterite, Phil Kleinsasser—his suspenders, beard and plaid long gone—serves as an assistant pastor.

I think one important group was omitted in this discussion - those of us who identify ethnically as Mennonites, or "raised Mennonite;" those of us who still consider ourselves Mennonite in an ethnic/"raised" kind of way. I believe most of us would say we didn't leave the church, it left us.

Speaking for myself, I am very grateful for my Mennonite upbringing. I am also grateful for a father who raised me to think for myself, to read/study the Bible, to pray and think about what I read; a dad who used to say, "Live what you believe and you won't have to say a word." He was insistent that I come to a faith of my own -- through his teaching, through the church's positions, through my own study and life experiences. I am, however, also grateful that I had the sense to walk away years ago, when it seemed that all the church could do was disagree, fuss and fight. A fine example is the current MWR Wenger kerfuffle. Breaks my heart.

I attended my 40 year Iowa Mennonite School reunion several years ago. Over half of my IMS class has left the Mennonite church - bred, born, raised Mennonite and gone. No one was angry; everyone was very sad. The best remark I heard? From a guy who buys, sells and hauls hog manure for a living. He said, "Debra, the Mennonite church doesn't stand for anything, we're not unique, we're no different from the Methodists down the road, we have lost the church in which we were raised. The Mennonite Church is gray mush." I agree. If thee's anyone who knows about "gray mush," it's my dear, funny, sad classmate! Gray mush indeed!