Leon provides B.C. prof a paw to stand on

The vital role of a service dog 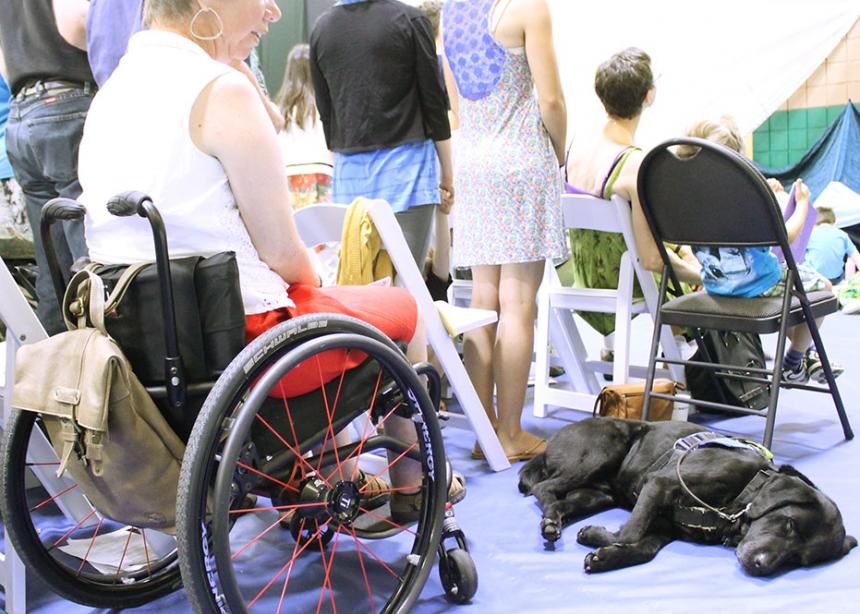 It’s hard to organize a trip to Mennonite Church Canada’s assembly, knowing what to pack, how many books to bring and how to plan visiting times. The who to travel with, however, is a no-brainer for Bonnie Sawatzky. Leon, a black lab service dog, is her constant companion. Leon helps Sawatzky pick things up, walk when she needs to, get up if she falls, and he especially likes to push buttons to open doors.

Sawatzky, a professor of biomechanics at the University of British Columbia, was born with some physical difficulties that were exacerbated by a car accident in 1993. Before the accident, she said she loved to cycle, but after it, “I felt like my legs were cut off.”

Her first service dog, a golden retriever named Phoenix, was an energetic, gregarious individual. With Phoenix pulling her wheelchair, Sawatzky said she was “cycling” again. “The wind in my hair is what I gained with Phoenix. He pulled me everywhere. Having a service dog brought life back for me.”

When Phoenix died suddenly of cancer, Sawatzky’s grief was profound. “I never knew what it was like to be depressed until I lost Phoenix,” she said. In addition to the grief of losing a beloved companion, Sawatzky had to cope, once again, with the loss of function and independence.

In 2008, a year after losing Phoenix, Leon came into Sawatzky’s life. He is very different than Phoenix, calm and quiet in contrast to Phoenix’s exuberance. While Sawatzky has not been able to resume “cycling,” because Leon does not pull, there are other things she has gained. Leon is content to patiently wait through long university classes—or assembly sessions—and his steadiness has encouraged her to go for short walks in their neighbourhood.

How does she want assembly participants to interact with Leon? “Leon loves belly rubs,” she said, “but please ask if it’s an appropriate time to pet him.” 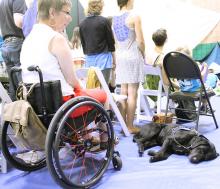