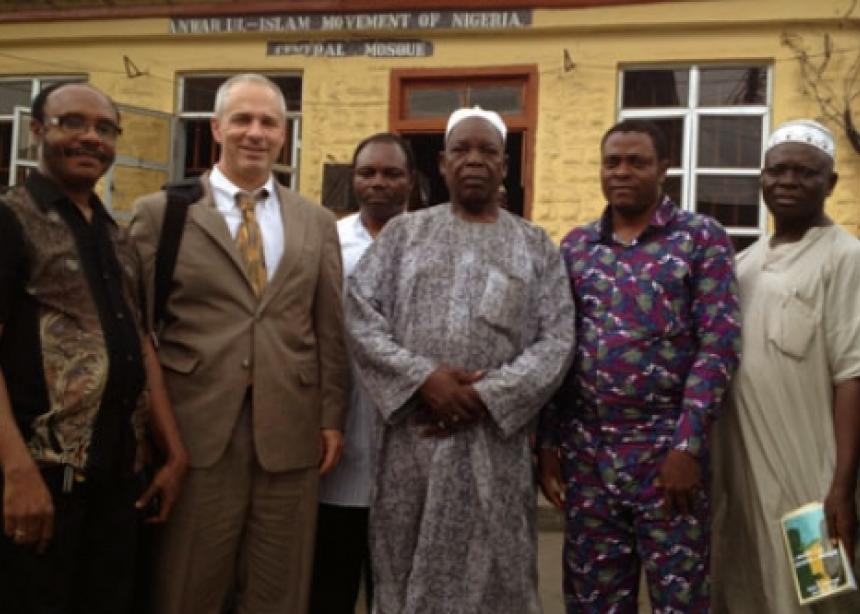 “The current situation in Nigeria is serious. The church in Nigeria, particularly in the northern part of the country, is being persecuted by Boko Haram,” Bornman said. “We cannot ignore this fact. I was aware that I was talking to people who have experienced violence, have suffered, and had friends who died.”

“But we asked the question: Does Jesus call us to something different, even in the face of persecution and suffering?” Bornman said.

Shenk was one of three main speakers for the AABS conference, “Mission: My Vision.” Bornman assisted and led discussion groups about theological approaches to how the church relates to the Muslim world.

A key scripture for the seminars was 1 Peter 3:15: “Confess Christ; Share the good news as people ask questions; Be gentle and respectful.” People were encouraged as they shared or listened to accounts of the church bearing witness in a respectful spirit. Quite a number of those present said the seminar gave them fresh hope. They spoke of ways they hoped to implement a spirit of peacemaking in their churches and personal lives.

On Friday morning, July 18, a meeting was arranged between the chief Imam Olarewaju of the central mosque of the Anwar Ul-Islam Movement of Nigeria and Bornman. Also attending the meeting were members of the imam’s staff and other Christian leaders from Port Harcourt.

“On the front end of the conversation, the core beliefs of both faiths were addressed,” Bornman said. “The conversation was respectful and open. The imam told of his concern for peace and gave an example from the life of Mohammed. He denounced the actions of Boko Haram against the people of north Nigeria. I, in turn, spoke of the Christian understanding that peacemaking is centered in the cross of Jesus, that Jesus forgave his enemies, that the message of the cross is that people can be reconciled with God and with each other.”

“Often people have the idea that the issues of faith on which we disagree will harm our relationships,” Bornman said. “But this isn’t true. The mosque officials seemed genuinely happy that we were there. They wanted to continue the conversation and we were invited to come back.”

Imam Olarewaju accepted Bornman’s gift of the book, A Muslim and Christian in Dialogue. “The imam and his staff expressed desire for further conversation,” Bornman said.

On Friday afternoon, Bornman presented the first session of a two-day seminar entitled “Bearing Witness” to a group of approximately 30 Christian leaders.

“Four main subjects were addressed: dialogue, witness, peacemaking, and hospitality towards our Muslim neighbors,” Bornman said. “The seminar focused on implementation. Many who attended told me they didn’t know it was possible to have a relationship with Muslims. They had never heard discussions about witnessing from a place of relationship and hospitality.”

“I was surprised to learn from the attendees that Muslims and Christians often refuse to eat each other’s food shared at Eid al-Adha, Christmas, or other special occasions,” Bornman said.

“In the session on hospitality we emphasized that the most basic thing a person can do to communicate love to someone is to share a meal with them,” Bornman said. “To reject a person’s food is in some sense is to reject them personally. Eating together is the most basic form of relationship.”

“However I was impressed that in a situation where there is violence, hatred, and mistrust, there are Christians who continue living with and relating to their Muslim neighbors,” Bornman said. “They have Muslim friends and they show us it is possible to live out the teachings of Jesus even in difficult times.”

“If our brothers and sisters in Nigeria can do this, we can be encouraged to do the same,” Bornman said. “We have something to offer to Muslims. The gospel is really good news, especially when viewed through the eyes of peacemaking.”

Shenk said he was encouraged by the numerous invitations he and Bornman received to come back and do more seminars. “There were many people who told us that our teaching changed how they will relate to their neighbors.”

This article originally appeared on the website of Eastern Mennonite Missions. Used with permission.