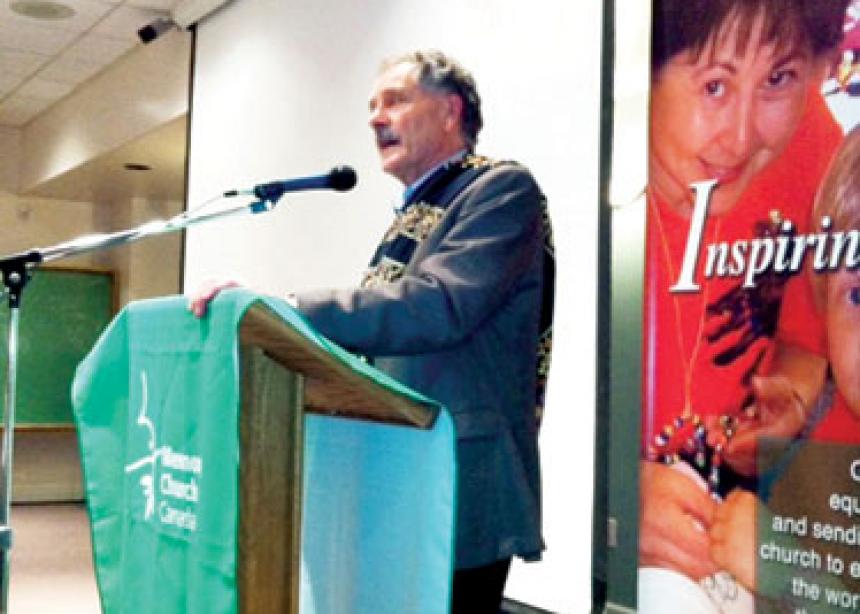 Gerd Bartel retired from his position as Mennonite Church Canada’s western director of resource development late last year, a job he describes as primarily visiting and saying “thank you” to the generous donors who support national church ministries. Bartel officially served in the position since 2000, but he fundraised for the church and its institutions on and off for 30 years.

In a post-retirement Church Matters podcast interview with Dan Dyck, Mennonite Church Canada’s director of communications, Bartel said, “I don’t visit wealthy people, I visit generous people.” He noted that among the generous people he connected with were some of the less wealthy members of our congregations." He described a few faithful donors as “reverse tithers,” people who “basically lived on 10 percent and gave everything else away.”

He went on to say that he hasn’t lived up to that kind of dedication: “The rest of us have to deal with the temptations and struggles of affluence in our society. [Reverse tithers] have been released of that struggle, it seems. They have said that everything is God’s, and for themselves they’ve kept only minimal amounts.”

For more than three decades, Bartel travelled extensively to fundraise for various parts of the church and church-related projects. He credits his wife Regina with making sacrifices so that he could engage in the work he loved. “My wife gave me a lot of grace,” he said. “For her, my leaving regularly for a week here or a week there was a little more challenging.”

It was especially demanding a couple decades ago, when the three Bartel children were young and he was busy raising funds for the building that now houses the Mennonite Church Canada office in Winnipeg. “That was a big deal for the whole family,” he said.

Retirement from MC Canada doesn’t mean Bartel will be any less busy. He has since assumed another role closer to home in Abbotsford, B.C., as the legacy development director for Mennonite Central Committee (MCC) B.C.; the position puts him in charge of a $13 million fundraising project that will result in the construction of a new building to house Abbotsford operations in one location (see story on page 15).

In addition to his new role, Bartel manages real estate holdings for a relative and serves as the volunteer vice-chair of Menno Place, a full-range housing service for seniors.

Bartel is physically active, too; he enjoys golf and is training for the Delta Triathlon on April 21. “It’s a mini-triathlon,” he said, “with a 700-metre swim, 20-kilometre bike ride and a five-kilometre run. I’m actually ready to do it right now.” He also skis with his grandkids and enjoys his motorcycle.

Daniel Horne, Mennonite Church Canada’s director of partnership development, noted that Bartel is a humble man who did not want to have a banquet recognizing his years of service. “Instead, we chose to honour him by holding a fundraising event for a cause he is very passionate about: our ongoing ministry in the Philippines.”

The fundraiser took place on March 5, 2012, at Peace Mennonite Church, Richmond. Close to 50 people and four generations of the Bartel family attended, including Bartel’s 97-year-old father, Siegfried; and his daughter and son-in-law, Christina and Darnell Barkman, and their young son. More than $3,600 was raised.

Dann Pantoja, Mennonite Church Canada Witness worker in the Philippines, was home to visit his ailing mother at the time of the event. In his fundraiser address, he credited Bartel with instrumental contributions to the development of the Philippines ministry, Peacebuilders Community Inc. According to Pantoja, Bartel supplied a number of ideas for ministry programs and church partnerships.

The fundraiser also served as a celebration for an upcoming church plant in the Philippines, where Bartel’s daughter and son-in-law begin an assignment as Mennonite Church Canada Witness workers in May with their son and an infant whose arrival is anticipated shortly. The Barkmans will work with the Integrated Mennonite Churches of the Philippines to plant an Anabaptist-oriented church in Metro, Manila.

Bartel said he considered his job with MC Canada the best job he ever had. “The opportunity to visit people has been part of it and it’s been an honour and a privilege to say thank you to donors. It’s been a wonderful experience.”

To hear the Church Matters interview with Bartel, visit mennonitechurch.ca/tiny/1742. 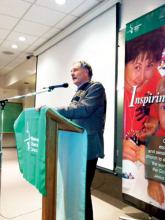