It took zoning changes, public hearings and a lot of donated money over a two-year period to convert an old repair shop into a place where immigrant Laotian families and Caucasians of German/Russian descent mingle. 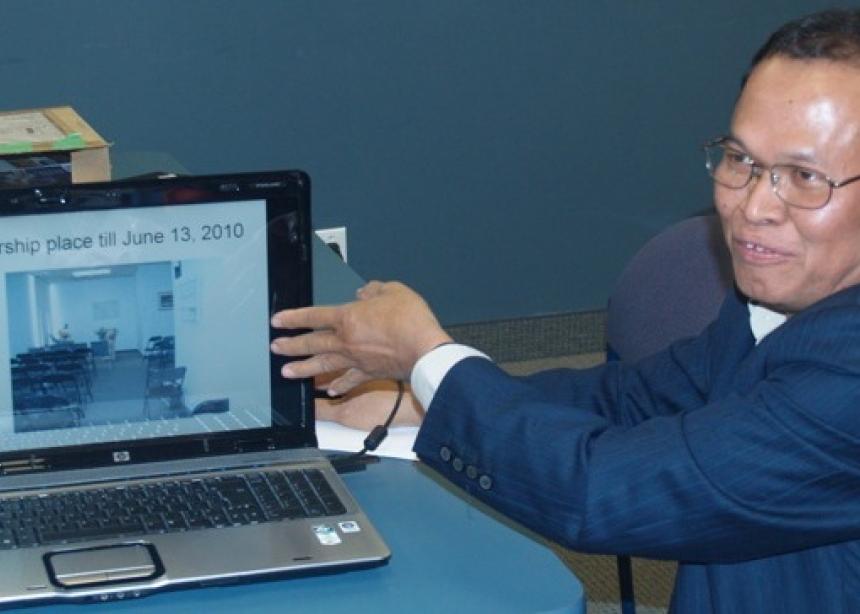 When Chinda Kommala opens the doors next Sunday, Sept. 26, to a newly-renovated 2,000-square foot worship centre, known as Unit 23 in the 70-unit commercial/professional mall on the corner of Westin and Finch, it will be a celebration of mammoth proportions, but not without struggle.

It took zoning changes, public hearings and a lot of donated money over a two-year period to convert an old repair shop into a place where immigrant Laotian families and Caucasians of German/Russian descent mingle in a new church plant in Canada’s largest city, according to Dale R. Bauman, vice-president of MAX Canada who is the new congregation’s board chair and preacher the first Sunday of the month.

“Local governments do not want more religious meeting places in their space,” says Bauman, “because we don’t pay taxes and do not build synergy in mall and condo developments.  We take up parking spaces and do not bring sales activity to our neighbourhoods.”  The new Lao Canadian Evangelical Mennonite Church sits among tire outlets, restaurants, doctors’ offices and more.

Wading patiently, but persistently through the local opposition, however, says Bauman, now means that more than a dozen families regularly attend with five more families coming for special events.  A Laotian dance group is using the facility. Pastor Kommala leads a Bible study in Laos by phone from his home in Toronto.

Kommala, who Bauman calls a “missional machine,” is at the same time planting another church in Toronto and is “dreaming and working on church plants in Guelph and in Laos,” his country of origin where he is leading an effort to get the Laotian government to register the Mennonite Church as an accepted religion able to plant new churches.

Kommala, a former soldier who, with bullets flying past his head, used free Bibles from the missionaries to roll cigarettes and toilet paper.  Then one day  he heard God speaking to him from one of those verses contained in that “rolled up paper,” according to Bauman.  The rest, as they say, is history.

Today, the “changed” pastor , his wife, Kien, and their three daughters “have sacrificed for the kingdom of God and make no apologies for being Mennonite and followers of Jesus,” further notes Bauman.

In addition to Kommala, there are many gifts at work in the new congregation.  Mathew Sou, sponsored by the Salem Mennonite Church in Tofield, Alberta, is the church treasurer, who, along with Sara and Katita, serve as the finance committee.  Bon Bouda is the worship co-ordinator.  Jason and Donna Martin, from Community Mennonite in Drayton and former missionaries in Italy under Virginia Mennonite Missions, come to serve and fellowship with the group.

“The church as a whole seems to have the gift of hospitality and evangelism,” observes Bauman.

But it all takes money.  Legal and architectural costs, taxes, property costs, taking down the old and putting up the new were part of the venture toward which several organizations committed major dollars.

According to Bauman, Mennonite Church Eastern Canada gave them a grant of $150,000 and an interest-free $50,000 loan for five years.  Joint Hands (formerly Mennonite Men—now joined with Mennonite Women) gave another $40,000.  All this, with a $135,000 mortgage from Mennonite Foundation Canada, “helped to bring it all together,” he says.

Good morning. I'm a missionary in Italy with the Church of the Nazarene. We were friends with Jason and Donna Martin when they were serving in Bari, but we lost touch with them when they moved away from Italy.

Would you please pass this message to them and let them know that we would love to reconnect with them. They can contact us by email anytime.

Thank you, and many blessings,
Joel and Sara Mullen
joelmullen@mac.com