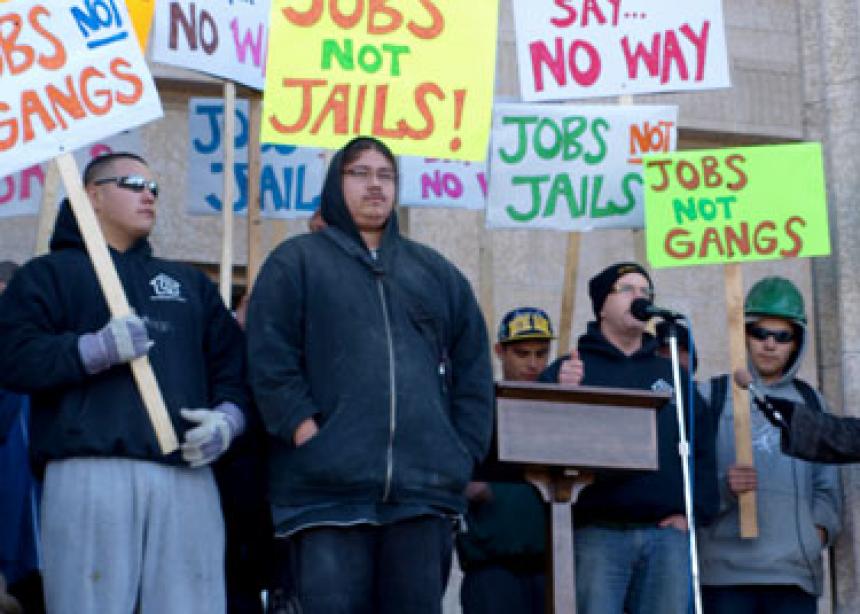 The Nov. 8, 2011, rally organized by the John Howard Society was sparked in part by comments from Andrew Swan, minister of justice and Manitoba’s attorney general, who said that Manitoba favours Bill C-10. The social services community believes Bill C-10 will aggravate already overcrowded Manitoba jails and siphon much-needed money away from social programs and other proactive crime-reduction initiatives that could have far-reaching, longer-term benefits. More than 350 people attended the rally at the provincial legislature in Winnipeg, said a John Howard Society spokesperson.

John Hutton, executive director of the Manitoba John Howard Society and a member of Hope Mennonite Church, Winnipeg, addressed the crowd. Citing several sources, he stressed that more time in prison results in more—rather than less—crime, and wastes taxpayer dollars that could be used more effectively to reduce crime by supporting restorative justice models and funding preventative social and educational programming.

Hutton’s themes were echoed by other speakers, including Jacquie Nicholson, literacy program coordinator at the John Howard Society who works directly with inmates at Winnipeg’s remand centre, who spoke on behalf of her incarcerated students to ensure their voices were heard.

Nicholson quoted one inmate, who predicted that increased incarceration rates will only benefit organized crime: “Gangs thrive on your misconception that locking them up will stop them. Jails become a type of headquarters. Splitting up gangs and transporting them to different jails across the country in an effort to divide and conquer only creates and multiplies the problem on a national level, creating a syndicate, a network, an organization, the very thing you are trying to combat. You will be brought to your knees through the billions of dollars you spend following your own recipe for disaster.”

Mennonite Church Canada representatives Elsie Rempel and Vic Thiessen attended the rally. Rempel, together with her husband, has been involved in restorative justice programs for 16 years. The couple has befriended “a lifer,” she said. “I have seen first-hand the degeneration of training and visitation opportunities from the inside. I wanted to add my voice to those who wish to defeat the bill. I see it as very expensive and counter-productive to the goal of rehabilitating criminals.”

While applause frequently affirmed the thoughtful presentations, the chants from Building Urban Industries for Local Development to “kill the bill” did the most to energize the polite crowd.

The rally concluded with a solidarity walk to Winnipeg’s nearby remand centre, to show its incarcerated residents that others were speaking out on their behalf and investing in restorative, rather than punitive, justice models. 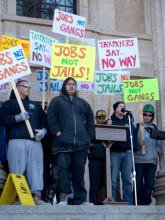