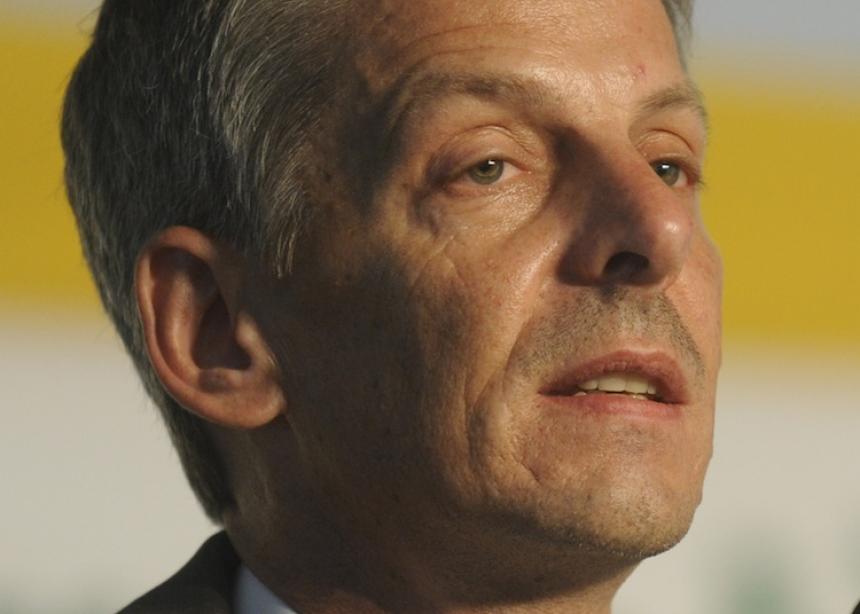 The academic Congress on Just Peace, held June 23 and 24 at the Free University of Amsterdam, marked the official launch of the university’s new Chair of Peace Theology and Ethics.

The chair, funded by the Algemene Doopsgezinde Societëit (Dutch Mennonite Conference, member of Mennonite World Conference), will be occupied by Mennonite theologian Dr. Fernando Enns, who in recent years has led a number of peace initiatives, most notably the World Council of Churches’ Decade to Overcome Violence. Enns’s speech at the Congress closing, “Towards an Ecumenical Theology of Just Peace,” was also his inaugural address as chair.

Keynote speakers came from five continents, and more than one hundred participants attended, of whom twenty were from outside the Netherlands. The group was interdisciplinary and ecumenically oriented, which was the goal of the Doopsgezind Seminarium (Mennonite Seminary) and the Free University, co-sponsors of the Chair.
The Congress, which also celebrated the 27th anniversary of the Seminarium, was held one month after the International Ecumenical Peace Convocation in Kingston, Jamaica, where the Decade to Overcome Violence was officially closed.
At the Amsterdam Congress, the main focus was on three themes that were also prominent in Jamaica as follow-up issues for peace work: the role of peace and justice for the unity of the churches; the intercultural context of peace with justice; and the interdisciplinary context.
The addresses and workshop leaders included a variety of prominent academics from around the world, as well as peace promoters. Those representing Mennonite World Conference member communities included: Barb Toews (USA) on restorative justice; Paulus Hartono (Indonesia) on practical reconciliation with radical Muslims; Donald B. Kraybill (USA) on the Amish art of forgiving; and Alix Lozano (Colombia) on building peace with justice in the context of Colombia.
The first keynote speaker was the prominent German theologian Jürgen Moltmann, whose theme was “A Culture of Life in the midst of Deadly Threats of our Times.” He spoke of the “terror of the universal death,” referring to a fascist general in the Spanish Civilian War who shouted, “Viva la Muerte.”
Similar messages can be found in letters of Taliban-suicide bombers, he said. Over against this “religion of the dead” Moltmann proposed a culture of life. Deterrence can’t guarantee peace; only justice will save the peace among the nations. Solidarity and community are the alternatives to poverty.
The congress included lively debate. “Can religions be instruments of reconciliation?” Dutch theologian Eddy van der Borght asked. Religious traditions often take sides in conflicts because of their identification with ethnic groups. National identities are a threat for the unity of the churches. “Ultimately it is easier to speak about peace than about unity,” van der Borght said.
Mient Jan Faber, the former secretary general of the Dutch Interchurch Peace Council (IKV), claimed that justice for everybody isn’t possible. “Don’t think that churches are able to reconcile conflicting groups,” he said. “Reconciliation is only possible in the generation after a severe conflict.”
South African professor of psychology. Pumla Gobodo-Madikizela, challenged that assumption. As a member of the former Truth and Reconciliation Commission in that country, she said: “I don’t believe in crimes which cannot be forgiven. We should not dehumanize the perpetrators, but humanize the offenders. In that case the impossible is possible.”
“Just Peace is a broad and a complex problem,” Dr. Alle Hoekema, president of the Seminarium’s jubilee committee, said. “We Mennonites shouldn’t think that we have the answer to all the problems. But with this new Chair, paid for by the Dutch Mennonites, we let it know that we have the courage, in an ecumenical setting, to ask questions which are important for us. The answer will hopefully be formulated ecumenically.” Hoekema concluded by pointing out how the new chair, in Anabaptist tradition, combines both theology and ethics.
During the festive inauguration ceremony, Fernando Enns was invited to present his lecture. Referring to the International Ecumenical Peace Convocation, Enns laid out a wide range of contexts for peacemaking: peace within communities, peace among peoples, peace in economic relations , and peace with the environment. The biblical understanding of peace (shalom) and (saving and transformative) justice allow no subordination of peace and justice but include them as one.
To respond to the current challenges from this perspective, Enns went on to explain how Christology, Pneumatology and Ecclesiology need to be revisited – within the ecumenical church , from a distinct Mennonite perspective, and in dialogue with people of other faiths.
The Dean of the Faculty of Theology and Vice-Rector of the Free University Amsterdam, Wim Janse, welcomed Fernando Enns as full professor and congratulated the Mennonite community for presenting Mennonite theology in this remarkable way to the academic world.
--July 20, 2011 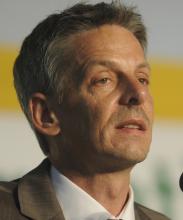 Good question. I'll try and track down a translated copy of the lecture and link it to an updated version of this story. Stay tuned!