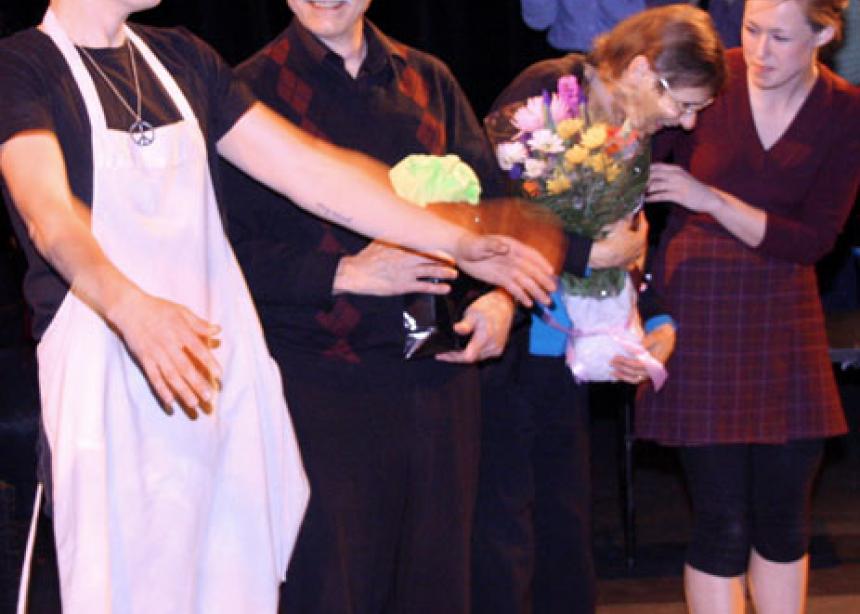 The Doxology scene was very moving for me, and symbolized a process that covered six years. The Mennonite community in Waterloo County, Ont., in the late 1960s and early 1970s kept singing until Sue and I joined in. It was a story of hospitality to two dislocated refugees.

When I have reflected on our first years in Canada, I remember how we turned to the Mennonite community when in trouble, and how consistently that community responded positively to young adults they didn’t know.

Dan, a Goshen (Ind.) College professor, and Kathryn Leatherman brought me to Canada in 1968. Kathryn was a Shantz from near New Hamburg, Ont., so my first night in Canada was in Kathryn’s sister’s home. I next sought out a former Goshen roommate, Peter Enns, who lived in Waterloo. I was put in touch with Walter Klaassen, a Conrad Grebel College professor who was active in the local support committee for draft resisters. It must have been Walter who led me to Jim Reusser, then pastor at Stirling Avenue Mennonite Church, Kitchener.

With no hesitation, Reusser told Lester Zehr, a member at Stirling and then still owner of Zehrs supermarkets, that he had a young man who needed a job. Zehr provided one with no questions asked. Reusser also found room and board for me in the home of Stella Cressman, an aunt of his wife Helen. Stella provided this home for at least six months, and indulged my long Sunday afternoon phone calls to Goshen while Sue finished her degree there. Jim and Helen opened their home to me—and Sue, after she arrived—on more than one occasion, and Jim would smile indulgently when we brought our visiting parents to church even though we didn’t otherwise darken the church’s doors.

The chain of hospitality did not end there. After Sue arrived in May 1969, she got a job at Provident Bookstore. The manager, Aaron Klassen, and his wife Helen became mentors to us, and had us in their home with their young children from time to time to experience “normal” life. Jake Enns, Peter’s father, got me a job at the Mutual Life Assurance Company after about a year in Canada.

When I decided to complete my bachelor’s degree at the University of Waterloo in 1972, the first course I took was Frank Epp’s “Canadian minorities” class. Frank had visited Goshen College while I was there, and had spoken passionately against the Vietnam War. I trusted Frank, and his activist Christian peacemaking attracted me. Walter Klaassen introduced me to 16th-century Anabaptism, which I found absolutely gripping.

About the same time, Sue and I began to occasionally attend Rockway Mennonite Church, then still meeting in the library at Rockway Mennonite School. John W. Snyder, the pastor, had a way of welcoming you without pushing any expectations. There were other “draft people” at Rockway Mennonite, and a sermon on the theology of Bob Dylan convinced me it was time to come back.

I had been baptized as an 11-year-old in my home church, but I asked for baptism again to mark this recommitment. This took place in October 1974, almost six years to the day after I first entered Canada. In my comments on the meaning of the baptism, I confessed my faith was not traditionally orthodox, but the church still made space for me as a follower of Jesus.

Not all encounters with the Mennonite community in our first years were positive, but the balance was overwhelmingly welcoming. The church kept singing, and we eventually joined in.

Did the persona of the marginalized radical refugee survive in any form? Others will have to answer that. I tried law school for part of a year, but discovered it wasn’t for me. My passion was really history. In the 1980s, when part of the executive board of Mennonite Church Eastern Canada and its predecessors, and later with MC Canada, I advocated for conference staff who wished to avoid paying war taxes. I advocated for homosexuals who sought greater acceptance in the church. I worked hard for the conference “integration” in Ontario that became MC Eastern Canada partly because I believed the church needed to include more than our individual Swiss/Amish/Russian Mennonite historical streams.

Thank you for inviting me to sing the Doxology. I hope we continue to invite others to join in as well. 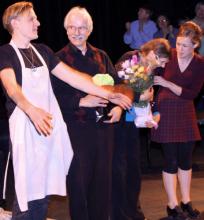