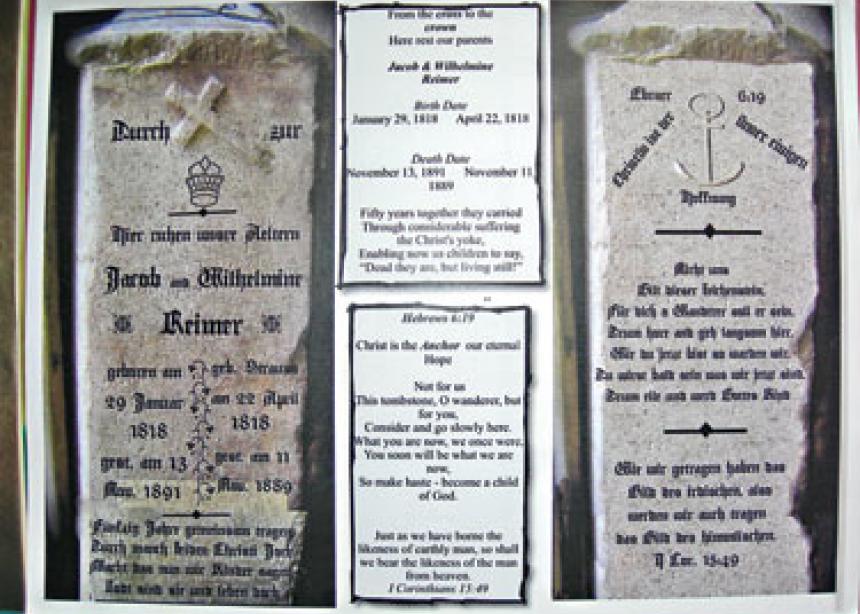 On a tour in Ukraine in October 2006, Gert and Katherine Martens experienced an emotional moment when a farmer in Oktaybreskoe removed a few planks from his wall and uncovered the tombstone of Jacob D. and Wilhelmine Reimer. It didn’t take them long to decipher the deep etching on the large granite stone and realize it was Gert’s great-great-grandparents. The farmer had rescued the stone before the cemetery was levelled for a grain field and had kept it for more than three decades.

The Martens had visited the area on an earlier trip, but had been unable to locate Wiesenfeld, the village that Gert’s father came from and that his ancestor, Jacob Reimer, had founded in 1880.

“Some men were working outside and we got our guide to go and talk to them,” says Gert. “They said they have a neighbour here who has a tombstone. Our guide was talking to him and suddenly he went toward a wall and took some planks away and behind those planks was a tombstone. It turned out that Nikolai [the farmer] had been told by his grandfather to look after that tombstone because he was a good friend to Jacob David Reimer.”

The tombstone holds special interest since Reimer was one of the founders of the Mennonite Brethren Church in the 1860s. As a preacher and farmer in the Molotschna village of Gnadenfeld, Reimer was among those who started meeting for worship and study in the homes of church members who had a yearning to bring new life into their worship. They had a growing sense that faith had become more show than substance in the larger Mennonite church. A confrontation with the church leadership resulted in the group forming what became the MB Church.

When a travelling evangelist came through the area, the Froehliche Movement took hold among some MB members. “They worshiped in a very, very charismatic way,” explains Katherine. “But Jacob Reimer was a very meditative person and this type of worship went against his nature. But he didn’t want to break with everyone, so he would not condemn them, but he would not take part in it. Eventually, this group got quite powerful and excommunicated him.” Later on, he was reinstated.

As the Mennonite population grew and a growing number became landless, Jacob Klassen, an MB, petitioned the government for more land. Eventually, a largely MB settlement in the Kuban was established. “But Jacob Reimer didn’t like it there, perhaps because many of those who had excommunicated him lived there,” Katherine surmises.

Reimer, his extended family and some followers moved on to establish the village of Wiesenfeld in 1880.

Since 2006, other Reimer descendants have visited the site. Last year, they began the involved process of moving the tombstone to Mennonite Heritage Village in Steinbach, Man.

“We are deeply grateful to Olga Shmakina, who is a tour guide for Heritage Cruise, for her tireless work in getting permission and making all the arrangements for shipping the tombstone,” says Katherine.

There will be a formal unveiling of the tombstone on July 25 at Mennonite Heritage Village.

The turn of events leading to the unveiling has been very exciting for Gert. “In a sense, we got very lucky when we saw those guys and the guide stopped and talked to them,” he muses. 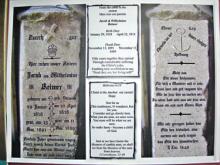 This is my great greatest grandpa. I am amazed. Thank u Jesus!

Very interesting, I have been on a history tour in 1995 with George Epp, now deceased, and our tour extended from Kiev to Yalta and dealt a lot with the Molotschna Colony. We saw cemeteries in and around the Dieper River,with lots of Mennonite names on them. Wish we could bring more back. Anyway my ancestors were also Reimer, Barkman, Rempel and Friesen. I will definitely go see the stone at our MHV Museum.