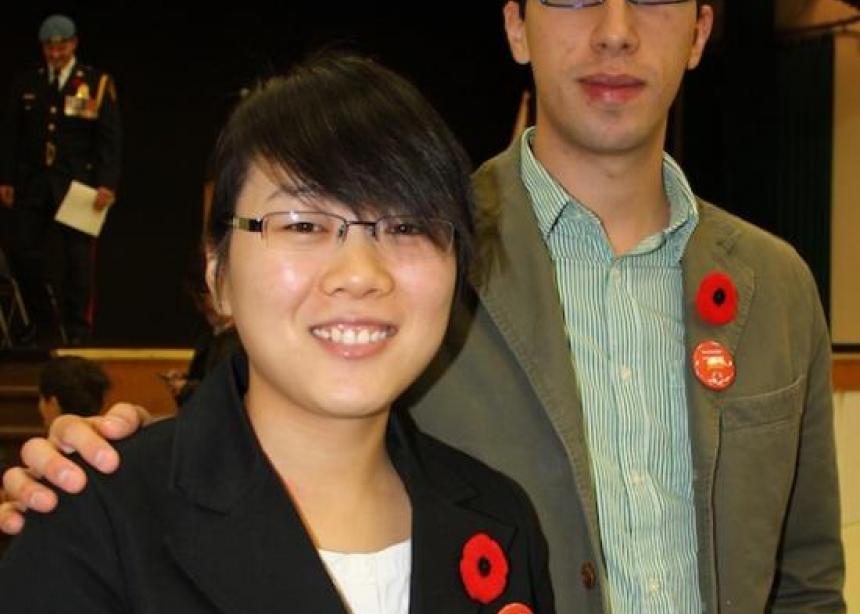 gathered here for a Remembrance Day service, and talked about peace.

Wearing both the traditional red poppy and MCC’s red alternative peace button, Ying Ying Wang from China and Santiago Gomez of Colombia were invited to provide an international greeting of peace.

Wang called the people of Warman her friends and, in a two-minute speech, talked about China wanting to find peace -- just like Canada. She said she was honoured to speak to Canadians on their special day. She went on to say that the peace of God is the biggest solution to war and conflict. There was spontaneous applause as she stepped back from the podium.

Gomez began by saying he is from a coffee-growing province in Colombia. He went on to explain that his mother is a Mennonite pastor. He recognized the sacrificial efforts of all soldiers, but added that they were attempting to make peace with weapons of destruction. Peace is love, he said, and true love comes from our God. He too got a warm round of applause.

Both Wang and Gomez practiced their speeches repeatedly until they got them almost perfect. Editing of content finished just before the program started at the Brian King Centre in Warman. The Centre is named after  an RCMP corporal who was shot near Warman about 35 years ago.

Ten red-coated RCMP were present at the ceremonies as were military officers, former peacekeepers in Bosnia and Cpl. Clint Neufeldt, a member of Osler Mennonite Church. Twenty groups presented wreaths.

Last year two representatives from Mennonite World Conference spoke at the service--Bert Lobe (who grew up in the neighbouring community of Osler, Saskatchewan) and Cynthia Peacock of India.

The International Volunteer Exchange Program (IVEP)  is a vocational and cultural exchange program that connects international young adults with host families and volunteer placements in Canada and U.S.

While in Saskatchewan, Ying Ying works at a Ten Thousand Villages store in Saskatoon and Gomez works at AODBT Architecture and Interior Design Ltd. 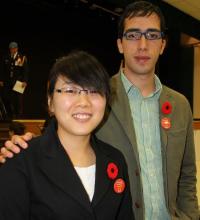