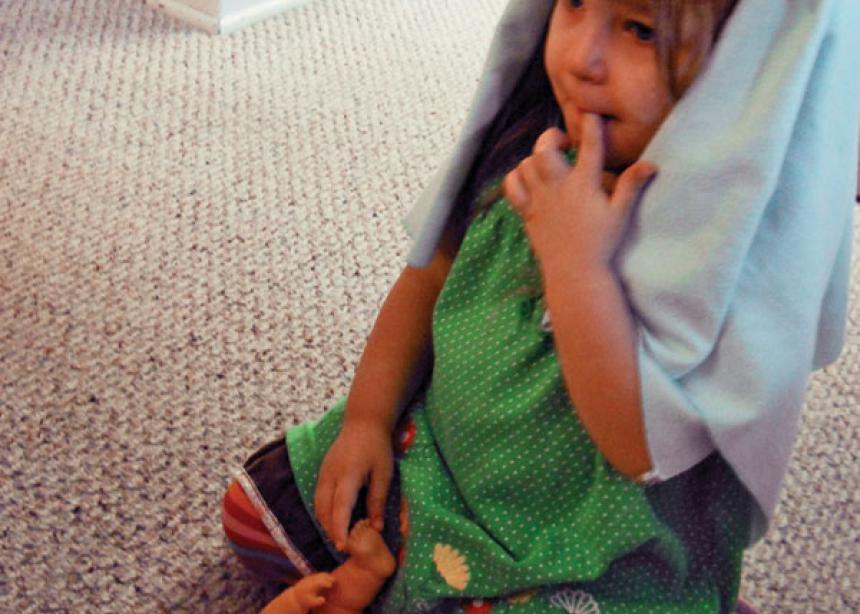 Christmas came early at our house in Winnipeg this year. Most likely because now that we’re retired, my husband and I again have the opportunity of looking at the world through a child’s eyes while babysitting our two-year-old granddaughter, Rielle Goulet, twice weekly. And that includes not limiting birthdays—or other celebrations—to a particular day or time, but celebrating them all year long!

So perhaps it’s not surprising that the three of us welcomed Baby Jesus on a rather “spooky” day just before Hallowe’en, while I was preparing worship materials for All Saints Day on Nov. 6, and our neighbourhood experienced a freaky hailstorm, a highly unusual occurrence in October even for this prairie city with its erratic weather patterns!

As it happened on this particular day, due to bathroom renovations at Rielle’s home, we had agreed to bathe our little grand-daughter following her afternoon nap, knowing that this might be a challenge, given that she had recently developed a bit of a phobia about having her long hair washed!

So, when she awoke from her sleep—which probably featured visions of a dragon costume and trick or treats, rather than sugar plums, dancing through her head—we were pleased at being able to cajole her into the bathtub quite easily with the aid of a Bath Baby purchased by her other grandmother for that purpose.

And she played there quite happily—until it was time to wash her hair, that is. Then chaos erupted as tears and protestations flowed, and those unseasonable hailstones, quite literally, began pounding on our roof, causing my husband to desert the bathroom fray as he rushed outside to put the car in the garage.

Thankfully, both storms where short-lived. One moved on quite quickly, leaving behind a layer of small glistening hailstones that didn’t result in any long-term damage. The other was helped along by Bath Baby and Baba having their almost bald heads washed, too, combined with several post-hair-wash “bribes,” including a Hallowe’en chocolate treat, helping to fill the bird-feeder, and checking out what hailstones were all about.

Still, some hiccups remained as I began drying Rielle’s hair. I then framed her face with the towel while she tearfully clung to her Bath Baby. Trying to cheer her up, I held up a hand mirror and said, “Look, Rielle, you’re like Mary, baby Jesus’ mother.”

Her tears stopped abruptly as she clearly remembered the Christmas story, which, at her insistence, we’d been reading throughout the year. She slowly turned her face backward, forward and sideways in front of the mirror trying to catch a glimpse of herself with a flowing “veil.”

Gradually, a look of awe came over her face as she observed her reflection. Then, her blues eyes shining, she cuddled the newborn Jesus with extra gentleness, and happily came out of the tub, saying,  “I’m the Mother Jesus now.”

After that she dried and dressed her baby with tenderness, just as we did her, all of us treasuring and pondering this moment of grandparenting care-giving joy together. 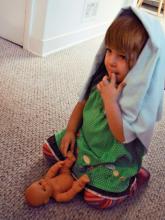 Thanks so much for your encouraging words, Evelyn! Not only re the story about Rielle taking on the role of "Mother Jesus," but also, how childhood fears which seem so big, are overcome in surprising ways as happened to your son. Who knows Rielle may yet become a deep sea diver too! In fact, by now, she seems to have lost her hairwashing phobia but has developed a couple of other two-year-old ones instead, which will, no doubt, also pass soon enough.

In the midst of these occasional squalls, she continues to charm us with her delight in seeing all things new--whether it's helping the church youth group decorate the Christmas tree with some "beautiful" (though actually quite old & tacky) ornaments; or, when she gently unwraps & sets up our inherited manger scene so that the Baby Jesus is positioned next to her,near enough to reach out and touch, while Baba reads that Nativity story yet another time.

The truth is she constantly reawakens faith in us. So,as a grandparent I understand in new ways,why Jesus said, "Let the little children come unto me, for of such is kingdom of heaven."