‘I never thought I’d be a landowner’ 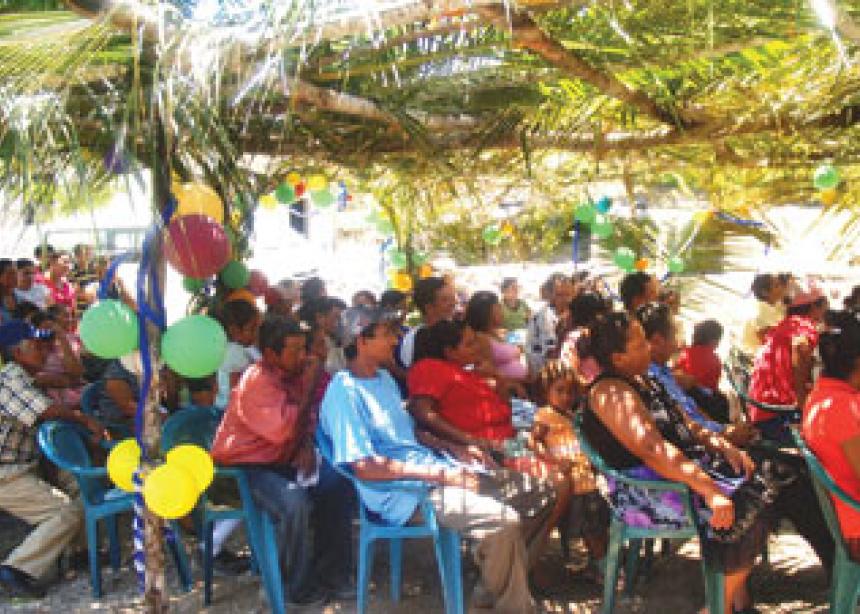 “I never thought I would be a landowner,” the father of four says, explaining through an interpreter that this is “the happiest day of my life.” Like his fellow villagers, some of whom can’t read or write, he has been living at a subsistence level, cutting sugar cane and doing other cultivation jobs for the more-wealthy farmers in the area.

Along with 21 members of the newly formed Amigos de Tapiquilares Cooperative, he has been spending every spare day during the last year constructing the 11 houses that, through a random draw, were just turned over to the fortunate families in a celebration of worship, title-signing and feasting. Cardenes can’t wait to move into his new home where, for the first time in his life, he will have indoor plumbing, running water and protection from the weather, which, in the rainy season, brings thunderstorms and drenching rains.

Based on Habitat for Humanity’s model of a “hand-up, not a hand-out,” these families each have an interest-free mortgage of $6,000, to be paid back to the co-op over a 15-year period. Should they default on the loan, or decide to move out of the village, the property reverts back to the co-op, explains Dave Hubert, chair of the project sponsor organization, Canadian Peacemakers International (CPI), based in Edmonton, Alta.

It is a win-win project, says Hubert, because the mortgages will be paid from the sale of pineapples and rice grown on the one-hectare plot of land surrounding the village. The land was purchased and donated by one of CPI’s sponsors, John and Sylvia Leonard of Mancelona, Mich., successful owners of a multinational tire-recycling business.

Cardenes, who has been living on 8,000 lempira (about $400) annually, hopes to increase his income to 50,000 lempira ($3,800) when the village’s vegetable farming operation is in full swing next year. Added to that is the possibility of a tilapia fish pond operation, as well as the raising of domestic rabbits for sale and for meat for their own tables, an operation that has proved successful in nearby Guatemala, according to Leonard.

Leonard, who has built a successful business from recycling tires and, more recently, from the development of a high-quality roofing shingle from recycled plastic products and crumb rubber, is devoting some of the profits from his business in Minto, N.B., to the land and business development of the village.

“The Lord has blessed us in our business,” he tells the gathering on June 5 under the makeshift palm-covered and balloon-decorated pavilion, “and so we want to pass on this blessing to see you experience a better life, a place where you can raise and feed your families, and send your children to school.”

Under the ceiba tree

On June 6, the Leonards, along with their pastor couple, Mark and Robyn McCune, and Leonard’s manager of his New Brunswick plant, Stephen Richardson, and his wife, Darla, along with Hubert and a North American CPI supporter, Tim Wiebe-Neufeld, co-pastor at First Mennonite Church, Edmonton, gather under the spreading branches of a giant ceiba tree—the sacred tree of life of the ancient Mayans—to carefully consult with the villagers as they consider together the process of turning their hillside land into a productive farming operation.

The village leaders are on hand to give guidance. Manuel Tabora, general manager of the housing program (Colonia Amor Y Esperanza) and CPI’s local representative, provide interpretation. Jose (Chepe) Vasquez, chair of CPI Honduras (Canadiensis por la Paz Honduras), puts it into language that the villagers can understand; a local Catholic catechist, he has earned the trust of the people and they take their cues from him. The North Americans, too, have earned the Hondurans’ love and affection, evidenced by the many hugs and smiles during the three-hour exchange of ideas.

The process moves slowly. As in Latino culture, time is not a commodity, but a gift to be enjoyed. Meetings rarely start on time. Mealtimes are determined by the position of the sun as it runs its daily course.

They begin by talking about pineapples. An orchard area has been cleared above the new houses. How will they get water to them and how will they fertilize them? Will they grow them in the commercial customs of the huge Cargill operation monopolizing the agricultural scene in Honduras, or will they go organic, taking a longer time but getting a higher price for their produce in the marketplace? With the encouragement of the environmentally conscious North Americans, they tentatively decide to go organic.

The villagers, under the leadership of Chepe, have done their homework. They may be uneducated, but they are not without savvy. They have already been in contact with USAID in San Pedro Sula, which has agreed to give them training in growing pineapples and rice. The villagers will have to buy the seed and fertilizer, but the USAID staff will offer several days of free training.

Water is discussed next. How will they pump the water from the well and lower spring up to the pineapple grove? They already know about drip irrigation—a surprise to Leonard, who had brought along pre-punched irrigation hose to show them. All they need is a pumping system to get the water up the hill. Leonard tells them he is exploring some “Third World” pumps already developed in China. Water not used by the 1,100-cubic-metre cistern tanks for the households can also be diverted into the water system.

What about building a tilapia pond below the ever-flowing hillside stream at the lower end of the property? And rabbit hutches for meat production? Leonard passes out a colour flyer showing a hutch he has observed in operation in Guatemala. It has to have special wire, he explains, to catch the droppings—which turn out to be the perfect fertilizer to be used for pineapple, rice and maize production. He says he wants them to build a hutch by the time of his next visit.

It’s getting to be a bit too much to absorb. Backing up to the water issue, Leonard, an impatient executive with highly developed management expertise, asks them, “Who is your irrigation man?” His left brain supercharged, he is afraid that if one of the villagers isn’t assigned oversight of the task, it won’t get done.

The Latinos signal a slow-down in the process. There is no response to assigning one of them to water. Cardenes, with a mischievous smile, asks if all of this is “for real.” Leonard is quick on the draw. “Are your houses for real?” he responds with a smile. Muffled chuckles spread through the group. There is no more discussion. They are ready to proceed—in their own way.

Hubert turns the discussion to hopes and aspirations. “I have a question for you ladies,” he says. “What do you want for your children?” The wives and young mothers, a little bored with the techniques of drip irrigation and tilapia ponds, suddenly snap to attention. Not missing a beat, one of them, a middle-aged mother of four, replies, “Schools, education and better health care.” Heads nod around the circle. She has spoken the wisdom of the village.

With some of the young women getting pregnant at 13, and no prenatal or postnatal care available, they know their needs, and want to develop better health care. Dental care is also badly needed, the volunteering two years ago of a “dental brigade” from Alberta notwithstanding.

Observing the dental needs around the circle, Sylvia Leonard has come prepared. Out of her suitcases come kits for every family, each containing toothbrushes and toothpaste, combs, soap, hand sanitizer, adhesive bandages, a notebook, pencils, a soccer ball and volleyball, a knife/tool kit for the men and a T-shirt. Out of another case shoes and sandals for all sizes and ages sprawl out.

Since most of the children lack the transportation to get to school in the nearby towns, CPI has instituted a program of computer-assisted learning: an innovative educational project called CAL. About an hour’s drive into Santa Cruz, CPI, under the direction of Bryan Butler, has set up a learning centre, a small space with only 17 computers, nine of them donated by Habitat for Humanity.

Butler, who grew up in Three Hills, Alta., but has spent 10 years in Africa as an educator under Mennonite Central Committee (MCC) and other non-governmental agencies, kick-started the Honduran project in 2009 with a $60,000 fundraising campaign to bring systematic learning to this city of 50,000 and the
surrounding villages, where very few people have progressed beyond Grade 6 due to a lack of education infrastructure and opportunities.

Hubert and Butler think that by bringing the computers—preloaded with an approved Spanish junior high school curriculum—to people in the community, they can give locals a way to improve their own lives. In a pilot project, two women in their 20s who work at the CPI office in Santa Cruz, have completed the Grade 8 curriculum after a whirlwind 18 weeks of study.

The next stage sees 30 people, including many adults, signed up for classes. Each must sign a “sweat equity” agreement, requiring them to teach two other Hondurans what they have learned. “At some point, if this goes well, we could see going to Grade 11,” says Butler.

Rural Honduran schools have no printed materials—no texts, reference books or novels—and so part of CAL’S goal is to acquire Spanish books in Canada, scan them and send them to Honduras so students will have access to good reading material.

On June 4, CAL graduated its first class of 18 students in the town’s community centre, with local educational and town officials in attendance, including the vice-mayor and local school superintendent. Butler has made a proposal to the Honduran education minister, to adopt CAL’s model of learning, showing that the state could educate more of its students at considerably less cost per student.

“They are taking the proposal seriously,” says Hubert, when asked how close the public officials are to adopting these measures. “We were told that the vice-minister has read it thoroughly and is about to call for more discussion.”

It is all in keeping with CPI’s overall vision, says Hubert, who founded CPI in 1997 following a 23-year career in post-secondary education, including eight years as college president and 10 years with MCC. CPI’s vision, he says, “is to develop and demonstrate models of peacemaking and peacebuilding that can be emulated by others to address the structural causes of conflict in Central America. The ultimate goal is to reduce the likelihood of more war in the region.”

Having served at the official level with MCC and Mennonite Economic Development Associates, Hubert says CPI is using the best from their models and from Habitat for Humanity in developing housing, land ownership and education initiatives in Honduras.