I and II Timothy, Titus have practical lessons for life today

World facing first-century Christians not unlike our own, says author of most recent addition to Believers Church Bible Commentary Series 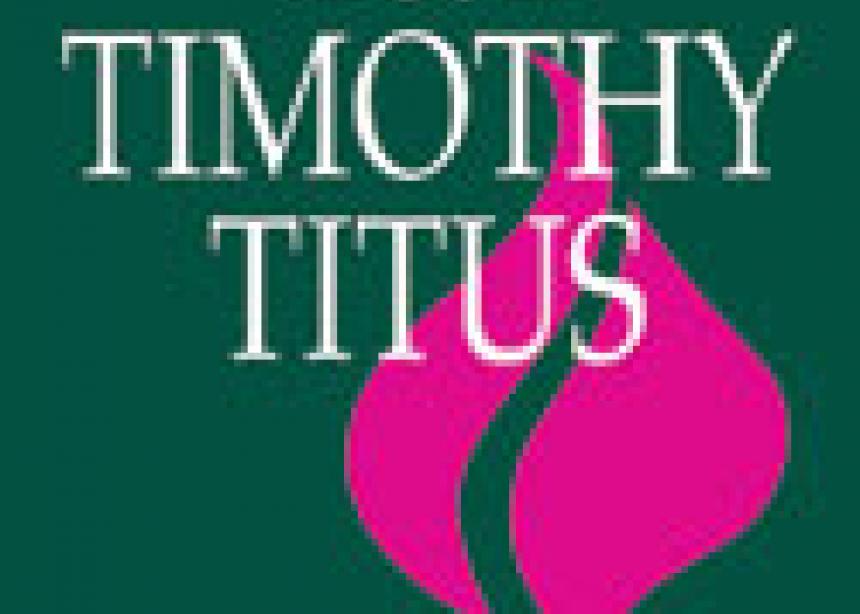 Immoral behaviour, competing religious and ideological beliefs and philosophies, church members and leaders who fail to live up to the high standards of the gospel: It sounds like what’s happening today, but it’s also the world that faced the first-century church.

“The world of the first-century Christians is not that dissimilar from our own,” says Paul M. Zehr, author of 1 & 2 Timothy and Titus, the 22nd volume of the Believers Church Bible Commentary Series from Herald Press. “Like us, they faced the challenge of applying the gospel in their culture, dealing with other religious beliefs and philosophies, and living ethically and morally,” he adds.

First and Second Timothy were written to a church in Ephesus that needed to “clarify its faith in God and in the gospel of Jesus Christ over against other competing religions,” says Zehr. At the same time, he notes, “Paul warned members against unacceptable behaviours, and shares the qualities desired in leaders of the church.”

The Book of Titus was written to the young and growing church on the island of Crete, a place where citizens were “known for drinking too much wine, pursuing sexual pleasures and other morally suspect behaviours,” Zehr explains. In this context, “Paul gives guidance to the young mission church, and to its leader, Titus, calling attention to the centrality of the gospel and the need for strong Christian character.”

All three letters “express the importance of salvation through Christ, although in slightly different ways, along with the importance of strong Christian character and behaviour and mission,” he says, adding that they also “deal with the issue of how Christian ethics apply to practical, down-to-earth issues that believers still deal with today, things like family relationships and employer-employee relationships.”

One thing that really caught the interest of Zehr, who served as a pastor for 25 years and taught for 30 years, including at Eastern Mennonite Seminary, Harrisonburg, Va., is how the letters address issues of church leadership. “I appreciate the way Paul talks about the character, conduct and content of the pastor’s work,” he says. But the letters are “more than just a manual for good behaviour and how to do pastoral work. They also show how pastors should clarify their theology and apply it in the context of Christian ministry.” Paul’s ultimate concern, Zehr states, “is sound doctrine and teaching—something that is very important—since healthy teaching and preaching makes a healthy church.”

For Zehr, the letters provide insight into how the early church applied the gospel to first-century politics, philosophy and religion, and to the social and cultural prac-tices of the people. “They show how the gospel can be applied to every Christian: how it can govern our ethical conduct, and how it can guide us as we confront the political, philosophical, the social-cultural and religious context in which we find ourselves,” he says.

“The underlying question they address is the same one we face today,” he says. “Should the church simply follow the prevailing social, cultural and political practices in order to be relevant, or should it confront the culture and adopt an alternative way of living?”

Herald Press is the book imprint of Mennonite Publishing Network, the publishing ministry of Mennonite Church Canada and MC U.S.A.