“Interesting!” “Informative!” “Inspiring!” were immediate responses to the question, “What did you think of the day?” Well over 100 participants, most of them over 60, participated in the annual Alberta Heritage Retreat held at Camp Valaqua on June 6, an exceptionally strong turnout.

A major draw this year was the guest speaker Mary-Ann Kirkby, author of I am Hutterite. A Hutterite by birth, her family left the colony when she was 10 years old. The move from a sheltered, protected, predictable environment painfully interrupted her carefree life and natural friendships. In the outside world, she was judged to be strange and different. Soon, she felt compelled to work at hiding her identity. Conformity became the operative word, whether in attire or in content and packaging of school lunches.

Ostracized by her peers at school, books became Kirkby’s greatest friends. She identified profoundly with Anne of Green Gables, but was distressed that the local library yielded no books about Hutterites.

Both her reading and her inherited abilities drew her in the direction of becoming a journalist. In the process, she experienced a growing awareness of the importance of owning and valuing her identity. “I have learned that our humanity is what we have in common, but our cultural heritage is a gift each of us is given at birth,” she said. “We will not reach our full potential if we do not receive and understand who we are.”

Also well-received was Jake Wiebe’s morning presentation based on Extreme Grandparenting by Tim and Darcy Himmel.

“I was very, very impressed with the morning message,” said Jeanette Heidebrecht from Carstairs, “because it opened the eyes of us older people to our worth. Our legacy is not money, but love. The legacy I want to leave behind for each of my grandchildren is that ‘Grandma loves me, no matter what.’”

After Kirkby’s moving tribute to the Mennonites for saving her people from extinction due to starvation in the Ukraine, the hymn “Blest be the Tie that Binds our Hearts in Christian Love” expressed the unity everyone felt with each other. 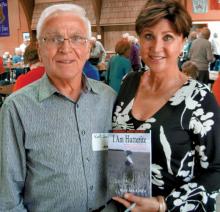 Kurt Janz, left, host of the Alberta Heritage Retreat at Camp Valaqua on June 6, poses with guest speaker Mary-Ann Kirkby, author of I am Hutterite, during one of several breaks.

Hello,
I just finished reading the book by Ms. Kirby, "I am Hutterite". It was amazing.I am Swedish with German background and found her book so enlightning and so pure.A well done preview into the world of Hutterite life and their challanges that they face away from the "norm", versus the structured life of these people.I am reading more about Mennonites and Hutterites.it is exciting to learn about their lives.