How to heal a nation divided? 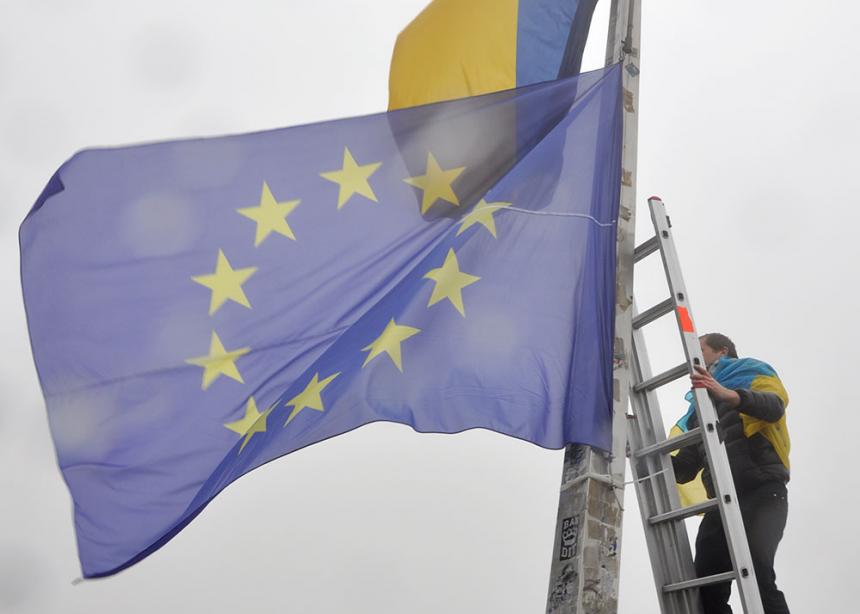 One could attribute the current crisis in Ukraine to the lack of sympathy for democratic practice. Repeated fisticuffs in Ukraine’s Parliament were one indication of that deficit.

And why was it not possible for the protesters in Kyiv’s Maidan Square to wait for upcoming elections? They had been set for March 2015, then moved forward to this December. Was one too uneasy regarding the possible outcome?

Former U.S. secretary of state Henry Kissinger noted in his article for the Washington Post on March 6, that East- and West-Ukraine had never gotten around to appreciating compromise. Both parties “have not been willing to share power,” he wrote. For a while, the Eastern party was on top, then the Western one. Under former president Viktor Yanukovych, the East was on top, but the wave of civil unrest and protests that became known as “EuroMaidan” inverted the power structure once more. So the East responded by splitting off Crimea.

Which brings us to the next crisis: East-Ukraine.

In the German magazine Der Spiegel, German ex-chancellor Gerhard Schröder conceded on March 9 that lopping off Crimea from Ukraine had been a clear infraction of international law. He sees it as multiple-layered illegality: The “power grab” in Maidan Square was illegal, as was the resulting independence drive in Crimea. One injustice caused the next.

I believe Russian Christians now celebrating the apparent return of Crimea to the fatherland dare not forget the unfortunate chain of illegalities which caused it.

The West has every cause to beat its own breast. Is it proper to demand that one half of a profoundly divided nation take sides at the expense of the other half? Schröder stated in Der Spiegel: “I ask myself if it was correct to force a culturally divided nation like Ukraine to choose between association with the EU [European Union] and a customs union with Russia.” It was this either-or alternative that finally capsized the ship.

Kissinger wrote: “Any attempt by one wing of Ukraine to dominate the other would lead eventually to civil war or break up.” In early March he was still of the opinion that Ukraine should attempt to fulfil the role of a bridge between East and West.

Only the Eastern military bloc was abolished after 1990. That’s at the core of the continuing division between East and West, which has now come home to roost in Ukraine. The West decided to create a European security net against—and not with—Russia. That has had consequences.

I find the explanation of a Moscow Baptist helpful. He compared the presentation of Crimea to Ukraine on Feb. 19, 1954, with a modern-day wedding that ignores the need for a marriage contract. In the early going, the groom promises his beloved heaven and earth. But when the time for a divorce rolls around, the man suddenly demands that a portion of his gifts be returned.

Some reports claim the presentation of Crimea to Ukraine was brought about by the self-serving conniving of the late Nikita Khrushchev, the former general secretary of the Communist Party of the Soviet Union. Precisely during that month, Politburo members were engulfed in a power struggle and he hoped to curry favour among Ukrainians by presenting them with a token gift. Who would have thought that 60 years later a divorce would be imminent?

The political orientation of Protestants

Even the most conciliatory statements from the leadership of Ukraine’s largest Baptist union, the All Ukrainian Union of Evangelical Churches, exhibit a clear po-litical preference. A helpful statement on Feb. 24 from Valery Antonyuk, the leading vice-president of this union, reads: “We supported the nation’s demand to put an end to the tyranny of the authorities and repressions by the police.”

Yet this nation is divided. Kyiv’s Protestants speak of “Ukraine,” yet usually they are speaking only in terms of West- and Central-Ukraine. Those truly concerned about national unity would express themselves differently.

Russians have the impression that West-Ukrainians can only think in terms of their own side. Demands out of Kyiv that Russians form forces opposed to President Vladimir Putin reminds me of life in the former East Germany. Westerners would say: “You must raise your voices. You must protest against the misdeeds of your government!” Easterners would respond: “Don’t you have a few issues yourselves? Have a look at Hiroshima, Korea, Vietnam, Chile, Nicaragua. Let us take care of matters in East Germany ourselves. We live here and it’s our necks that are on the block—not yours.”

More than a few Protestant articles in the West are euphoric regarding the naming of Oleksandr Turchynov as acting president of Ukraine. Turchynov occasionally preaches in a Baptist congregation in Kyiv. Billy Graham’s Decision magazine stated on March 6: “God is mightily at work in Ukraine.”

Yet Russia’s faithful are more sober regarding developments. A Baptist heading a coup-instigated “illegal” government with at least five far-right ministers does not make for great Baptist public relations in Russia. Russia’s tiny Baptist flock is worried about the long-term consequences.

But is it really the Baptists and Protestants who are calling the shots in Ukraine? In the British Globe and Mail on March 8, Olga Bogomolets, who attained acclaim as a doctor attending to Maidan Square’s casualties, explained the reasons for her distance from the Kyiv government. She accused the new government of having brought very few “new faces” into play. Turchynov, of course, belongs to the “old faces.” For 20 years, he served as the right-hand man of Yulia Timoshenko, the oligarch and politician.

The Russian Union of Evangelical Christians-Baptists and Russia’s other larger Protestant denominations will not be going to bat for the new Kyiv government at the expense of Putin’s administration. And this is not primarily because they fear Putin, but rather because they don’t recognize any clear moral superiority on the part of the Kyiv government. And this is the case even though Russians are clearly in-the-know regarding the local sins and shortcomings of their own government.

A very wordy statement from the Russian Union on March 13 reads in part: God “accepts them all as his children. Let us not claim that God is on our side and against the others! God is above and beyond our petty preferences and loyalties. In the political sphere, God is not for one side at the expense of the other.”

In short, despite the unavoidable contradictions in our political assessments, being one in Christ has consequences which express themselves in public life. What could some of these consequences be?

• The heated atmosphere at present results in belligerent and unbridled language. In a release from Christianity Today on Feb. 24, Turchynov spoke of the “unprecedented cruelty and brutality of the dictatorial regime.” But was Yanukovych’s administration more despicable than Cambodia’s Khmer Rouge? Cries of “fascism” are volleyed to-and-fro.

A prominent Crimean election placard essentially stated: “Nazism or a Free Crimea.” But such exaggerations happened on both sides of the barricades and travelled at least as far as Washington. We need linguistic disarmament. Only a cautious and respectful diction can point the way towards peace.

• Putin-bashing does not sit well on a Christian frame. Kissinger stated it differently: “The demonization of Vladimir Putin is not a policy; it is an alibi for the absence of one.” And Schröder has been lambasted for being a friend of Putin.

But should not every Christian have at least a few friends who would not be welcome at most Pentagon parties? That could serve the cause of peace. More than a few contacts could be struck up via the Schröder-Putin connection.

• The home page of the Wheaton, Ill.-based Peter Deyneka Russian Ministries appeals for donations for the family of 26-year-old Alexander Khrapachenko. This young Baptist from Rovno was tragically killed during the shootings in Maidan Square. But why should the mission not also start an appeal for the bereaved family of a state-supported policeman? That would underline the non-partisan peacemaking character of the gospel and would allow the ministry to better fulfill the task stated online: “Healing and reconciliation in Ukraine.”

This would also demand a significant change in course for the mission. A primary representative of this mission in Ukraine, the young Baptist professor Michail Cherenkov, is struggling mightily in cyberspace for EuroMaidan and against Russia. Is “Russian Ministries” willing to voluntarily abandon its ministry on the ground in Russia for the sake of this? That would be a great pity, for the ministry has done good work in gathering the new, young “evangelical intelligentsia” in the former Soviet Union. Irpen, near Kyiv, has until now functioned as a kind of think tank for the evangelical movement in Russia and beyond. Is that role now over? It is difficult to reconcile myself with such an eventuality.

Yet the political-strategic aspect dare not remain central. More important is the question: “How does God think and what is he expecting from us?” In the interview with Decision, Turchynov quoted Romans 8:31: “If God is for us, who can be against us?” Yet the Russian Union’s statement sounds otherwise: God is impartial and finds himself beyond the battle. He does not struggle for West-Ukraine against East-Ukraine or vice-versa.

Of course, as acting president, Turchynov is in need of our prayers! Can he at least keep the remainder of the country—without Crimea—in one piece? Can he defend moderate forces against the onslaught of the radical right? His task is not an enviable one.

William Yoder grew up in the Mennonite church in Sarasota, Fla.; he graduated from Eastern Mennonite College in 1973 and received a Ph.D. in political science from the Free University of Berlin (West) in 1991. His dissertation was on the role of the evangelical church in East Germany from 1945-61.

‘Blessed are the peacemakers’

For discussion: How to heal a nation divided

‘In the name of Christ’ (MCC’s work in Ukraine) 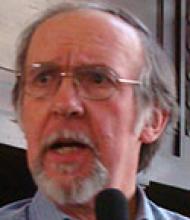