How green is my MCC? 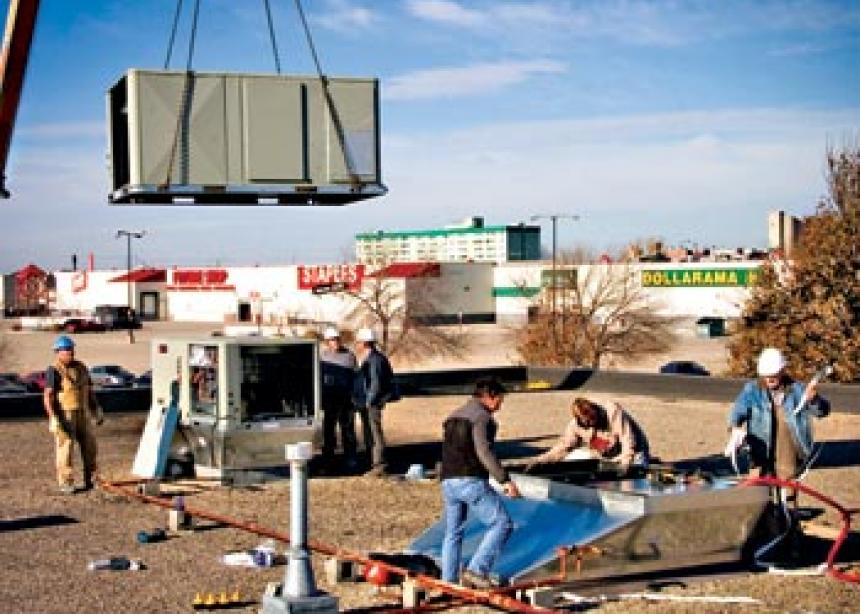 Mennonite Central Committee Canada’s Winnipeg headquarters had geothermal heating installed in October 2008 in order to reduce the carbon emissions it takes to heat the office building.

While Will Braun applauds Mennonite Central Committee (MCC) for its commitment to shrink its carbon footprint by 20 percent over the next 10 years, he wonders whether it is just “belt-tightening” or setting a new environmental paradigm, whether it is “leading or following.”

Braun, a New Order Voice columnist for Canadian Mennonite, has been a consistent critic of the Mennonite church in its recent efforts to add “care of creation” to its core theological beliefs and practices, not because he is opposed, but because he thinks the church is coming to this awareness “too little, too late.”

MCC is probably leading the church in this cause, he says, and should be credited for raising its sights by linking emission reduction efforts to the plight of people who suffer most from the impacts of climate change. “The goal implies an intent to be accountable, which is positive,” he says.

But when measured against last year’s climate summit goal of an 80 percent reduction in global CO2 emissions by 2050, he says the MCC goal looks unimpressive. “Would MCC leaders feel proud to stand up in front of the people in those parts of the world most impacted by climate change and announce this goal?” he asks pointedly. While the world’s G8 leaders didn’t approve the goal, it was a good benchmark, Braun insists.

Spokespersons for MCC are aware of their shortcomings as a people.

“Our lifestyle leaves a toxic legacy,” says Mark Bigland-Pritchard of Low Energy Design Ltd., environmental auditor of MCC’s North American operations. And recognizing that the organization contributes to carbon emissions through air travel and inefficient buildings, MCC has forged a partnership with a not-for-profit organization called Sustainable Waterloo to lessen its emissions in these areas.

All 12 North American MCC offices will report emissions from air and land travel to Sustainable Waterloo as a part of their partnership, providing computer-based tracking tools, analyzing data and creating reports for MCC.

Dan Wiens, the task force’s other co-chair, is also contrite and realistic about MCC’s goals. “Carbon neutrality is too lofty a goal, but we’re headed in that direction,” he says. Wiens is an organic farmer and environmental activist on top of coordinating MCC’s water and agriculture programs globally.

Carbon neutrality is achieved when an organization—or building or industry—generates no more greenhouse gas emissions than it absorbs, according to MCC’s environmental audit report.

Air travel to be reduced

The people MCC is called to serve, Wiens says, “have fewer resources to cope with a changing climate, and they tend to live in mid-tropical zones, where climate change is more extreme.” In order to better serve those in developing countries and to better facilitate right relationships with the environment, MCC is cutting back on air travel.

In a year, almost half of MCC’s 2,509 tonnes of carbon dioxide emissions are from air travel: 1,142 tonnes in total.

“All of this is impacting people in the developing world,” Wiens notes. “We fully acknowledge that we are a net carbon contributor.”

Bigland-Pritchard’s report suggests that cutting back on air travel is one way that MCC can shrink its carbon footprint and further aid people in developing countries. To that end, air travel reduction is already underway. MCC B.C., one of the 12 regional offices, is switching from a biannual meeting to an annual gathering. John Nofziger, peace and development educator for MCC B.C., says the office is cutting out travel as a networking tool and going, instead, with a half-day conference call.

MCC Canada’s biannual staff meetings with the Akron, Pa., office have become annual and many staff members utilize Skype, an online communications program, to communicate with people in other provinces or countries. With the use of web-cameras, Skype users can see the person they are talking to, so it is like they are meeting face to face.

Darren Kropf, who coordinates MCC’s creation care program out of the MCC Ontario office, says that “it’s pretty hard to build relationships without talking to people [face to face].” However, meeting face to face on a less frequent basis will force MCC staff to “build relationships on a more intentional and fruitful level,” he adds.

Some MCC offices are concentrating more on building renovations and purchasing greener energy than others.

MCC offices such as the Calgary one emit a great deal more carbon dioxide into the atmosphere through their use of electricity and heating, in comparison to the amount they emit with air travel. Almost three-quarters of Calgary’s emissions—234 tonnes—are from electricity and natural gas usage, while just over a quarter come from air travel. Its electrical energy comes from coal, as well, which is not a green source of energy.

The MCC Canada office in Winnipeg invested in geothermal heating in the fall of 2008, in order to heat the building more efficiently during the city’s often frigid winters.

But, it must be noted, says Braun, that most MCC Manitoba staff moved out of that building. “So maybe the building is more efficient now, but for a fair before-and-after comparison, they should compare the old 134 Plaza Drive office with the current 134 Plaza Drive office plus the new MCC Manitoba office,” he suggests. “The truth of the matter is that average office footprint of MCC Canada staff has gone up, and that is a move in the wrong direction.”

In the past, only 10 percent of the MCC Ontario building’s emissions came from the consumption of natural gas and electricity. According to Kropf, MCC Ontario has purchased its power from Bullfrog Power, a green energy provider since 2008 that utilizes wind energy and low-impact hydro energy. MCC Ontario is also hoping to upgrade its office building in the next two or three years.

Nofziger says that MCC B.C. has replaced many windows and doors with better seals in its office building, to ensure that heat is not lost. It also hopes to better insulate its warehouse and offices in the future.

MCC Saskatchewan executive director Claire Ewert-Fisher says on behalf of its creation care board, “At this point, we are very aware that we are still several steps away from having an energy-efficient building. Our hope is to research viable options to increase substantially the energy efficiency of the building. This will be critical to reaching our environmental goals.”

On the global scene, MCC’s environmental work in Burundi includes a food-for-work reforestation plant where the local people establish nurseries so that trees can be planted from seedlings on the nearby hillsides in exchange for food.

Some 460,000 trees were planted in an effort to “alleviate the droughts that cause food shortages,” reports Brandon Thiessen, an MCC reforestation consultant. Trees play a significant role in the water cycle as well as converting millions of tonnes of carbon dioxide into oxygen.

MCC supports environmental education in many countries around the world, including Afghanistan, Haiti and Brazil. It also advocates for environmental justice in many other countries, its voice heard by larger worldwide organizations working on justice issues. Kairos, an MCC partner, has been motivated to get into environmental care; it recently took a tour of the Alberta tar sands to explore the environmental implications of that mega-project.

While just now pushing the environmental envelope, MCC is not the first to get specific and goal-driven in this cause. Some Mennonite congregations, such as Milverton Mennonite Fellowship, Ont., have installed geothermal heating systems to save energy and reduce the use of fossil fuels since 1991.

Hillcrest Mennonite Church in New Hamburg, Ont., the only Canadian Mennonite congregation of 20 registered as participating in the Mennonite Creation Care Council’s “100 Shades of Green” program, received an award from the Waterloo Region’s Greening Sacred Spaces network for insulating its water heater, installing energy-efficient LED bulbs in some indoor signs and replacing most light bulbs in the church with compact fluorescent bulbs, and for plans to install $100,000 worth of solar panels on the church grounds.

Outside the denomination, St. Gabriel’s Roman Catholic Church in Toronto was the first congregation in Canada on track to receive the Leadership in Energy and Environmental Design (LEED) gold certification for its exceptional environmental performance and energy efficiency, according to press reports.

Included in St. Gabriel’s state-of-the-art green design features are a solar glass wall on the south face that harnesses the energy of the sun while creating a visual bridge connecting worshippers inside with a beautiful naturalized garden beyond. To preserve the garden’s aesthetic and residential ambiance of the surrounding neighbourhood, the parking lot has been moved underground.

The gathering space, just within the main doors, features a “living wall” draped in foliage over which a thin layer of water constantly flows. The wall is designed to purify the air of both the gathering space and the main sanctuary.

And according to a special issue of Maclean’s magazine last June, over the last decade major Canadian corporations such as Hewitt-Packard, IBM and Ikea have been urging employees to ride their bicycles to work, giving special parking permits to employees with hybrid cars and sponsoring tree-planting, as well as cutting staff travel substantially through video-conferencing.

“Why has it taken us so long?” the impatient Braun asked in a May 2008 column. “Our churches are so completely mired in the energy-addicted culture that sometimes I wonder if God has said, ‘Okay, if that’s what you really want, go for it and see how it turns out.’ It’s time to beg for mercy. Maybe MCC could call a month-long travel moratorium as a sort of fast for mercy and prayer for courageous action.”

The equivalent of approximately one tonne of carbon dioxide is emitted by the following: 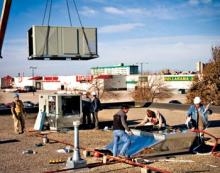 Mennonite Central Committee Canada’s Winnipeg headquarters had geothermal heating installed in October 2008 in order to reduce the carbon emissions it takes to heat the office building.