More than 380,000 people are waiting to see if anything is left of their homes and their livelihoods when the volcano finally stops erupting 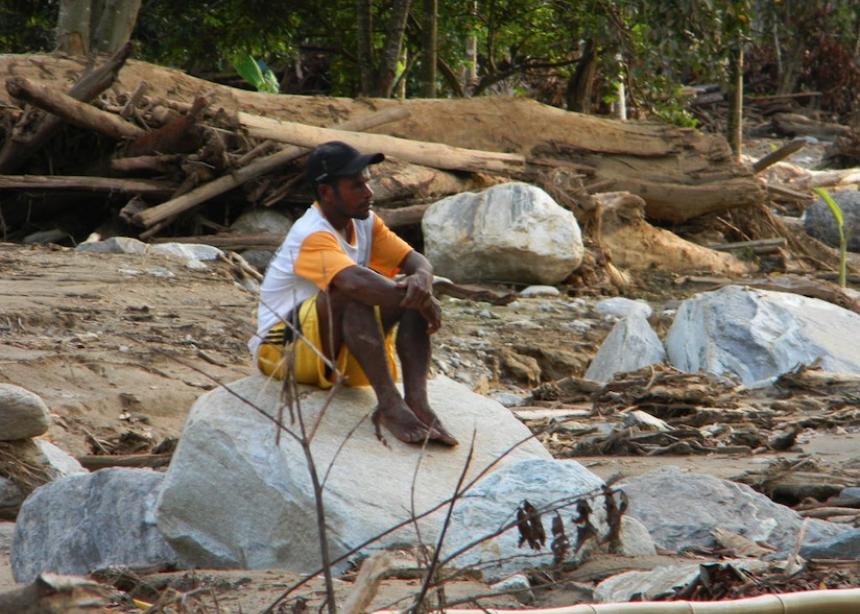 In Java, Indonesia, palm trees fold like umbrellas under the weight of volcanic ash spewing from Mount Merapi. On the outskirts of this black and white world, more than 380,000 people are waiting to see if anything is left of their homes and their livelihoods when the volcano finally stops erupting.

At the same time, on the far eastern Indonesian island of Papua, 97 families from the village of Rado grieve as they clean up the destruction caused by an early October flash flood. The flood killed 71 villagers and flattened almost all of their homes and their school and severely damaged their church.

Mennonite Central Committee (MCC) is responding in both situations through an Indonesian partner, Mennonite Diakonial Service (IMDS), the relief and peacebuilding arm of the Muria Mennonite Synod. (IMDS has no connection to Mennonite Disaster Service.) The response is projected to cost $145,000.

In Yogyakarta, Java, IMDS is collecting and distributing supplies for volcano survivors and preparing 1,500 packaged meals of rice, fish and eggs to take to three camps of displaced people in Magelang. More than 30 volunteers from Mennonite churches, universities and community groups are helping each week.

At the camp, 2,800 people from four different villages have congregated. Many of them have moved twice or three times to get further away from Mount Merapi, which began erupting on Oct. 26. IMDS is coordinating the emergency response to this camp, using its resources and those of the Indonesian Red Cross and the Indonesian Health Department.

The coordination is an important peacebuilding activity, said Jeanne Jantzi, an MCC representative in Indonesia, because it helps to minimize conflicts. People in the camp are in a high-stress situation, they don't know each other and they each report to different leaders from their home villages.

“Coordination of various response organizations, the active participation of those who have been displaced and just distribution systems build peace in a disaster setting,” said Jantzi, who serves with her husband Dan, also an MCC representative in Indonesia. They are from Lowville, N.Y.

In Papua, trauma healing care and temporary housing are top priorities for the people of Rado. The Oct. 4 flash flooding was caused when the lip of a lake broke high in the mountains, releasing a torrent of water strong enough to carry trees one meter (39 inches) in diameter and boulders so heavy 10 people cannot lift them.

The flooding devastated Rado, a homogeneous community, made up of the same ethnic group. Most are forest garden, subsistence farmers, almost all suffered loss of their homes and they all are members of the GKI-TP Pniel congregation, part of the Evangelical Church of Papua.

IMDS provided initial trauma care and is helping to connect the village to health care and clean water. The village will need temporary and long-term housing and continued trauma care.

MCC invites gifts toward its commitment of $145,000 for both disasters. Contributions can be made at any MCC office and designated as “Indonesia Disasters 2010.” Donations also can be made online at https://donate.mcc.org/project/indonesia-disasters-2010. 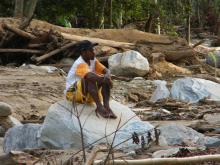