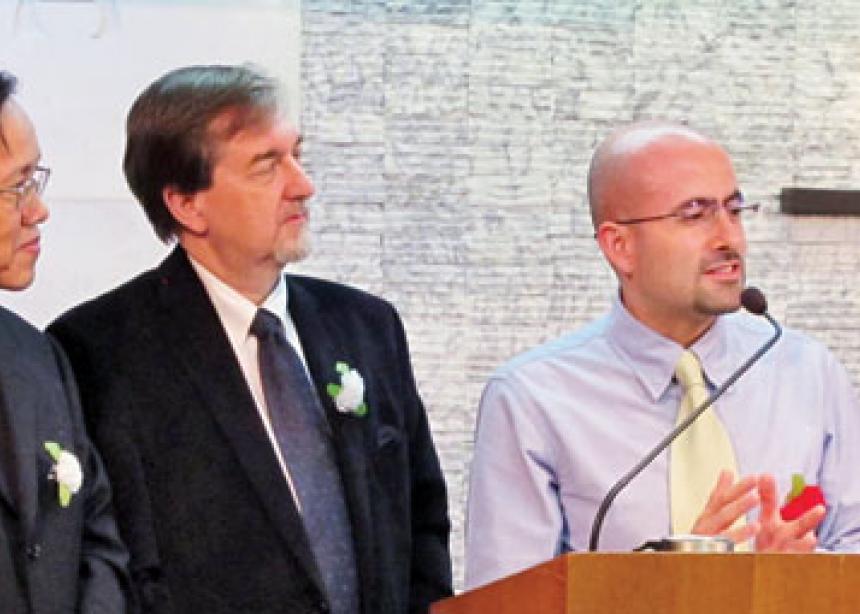 As one amateur Mennonite historian likes to point out, the only real Mennonite name is Menno Simons. From there on down through history, the rest of the family names are just “add-ons.” But after a series of Mennonite World Conference (MWC) general secretaries named Dyck (1961-73), Kraybill (1973-90) and Miller (1990-2011), the García name stands out as an historically recent addition to the Anabaptist family.

César García’s personal story with the Mennonite family began in Bogotá, Colombia, when his mother took him and his sister to several congregations in search of a new church home. Eleven-year-old César chose Iglesia Hermanos Menonitas Dios es Amor (God is Love Mennonite Brethren Church) as the place they would settle.

That choice was the first step on a continuing journey for García, who has come to treasure Anabaptist theology and history, and has given his life to scholarship, to mission and to shaping the church from an Anabaptist perspective.

A drive to understand Scripture and have a reasoned faith has characterized García’s walk since what he calls his “first conversion” at 19. After some teen years rejecting God and the church, García found himself depressed and unfulfilled by the existentialism and other philosophies he was pursuing. “The sense of vacuum was huge,” he recalls.

Under pressure from his mother to come back to church, García attended a Dios es Amor youth meeting, where he was touched by the speaker’s assertion: “God doesn’t see us as a problem, but as a possibility in his hands.” Half-believing that he was just “talking to the walls,” García told God that he wanted to experience that hope.

“The next day my life was different,” he says. “I decided to read the Bible, come back to church and start looking for responses to my atheistic arguments.” Not satisfied with a personal emotional experience, he also began a lifelong pursuit of theological study, mission and church ministry.

García’s love for learning has brought him into contact with many theological traditions. As a child attending private Catholic school, he already found himself bringing what he learned into discussions with his teachers. “Of course I lost the argument every time,” he says with a smile, “but it pushed me in my convictions.”

García worked for six years at a Christian radio station, where he interacted with Christian leaders from charismatic, evangelical and mainline denominations. “It was a time of growing theologically,” he says of those years teaching and counselling in his radio ministry and serving as youth pastor and elder at Dios es Amor.

More formal education at Seminario Bíblico de Colombia, an interdenominational seminary in Medellín, earned him a bachelor of theology and Bible degree with an emphasis on missiology, and gave him the tools for study of the Bible. Well-versed in Protestant theology, García was now ready for his “second conversion,” this time to Anabaptism.

Juan Martínez, then president of the Seminario Anabautista Latinoamericano (Semilla) in Guatemala, challenged García to complete his education by studying Anabaptism. When García and his wife Sandra Báez moved back to Bogotá for church ministry, he took up the challenge, starting with John Driver’s book, Eclesiología Radical. “It was amazing,” he says, “like candy for a child.”

A year later, the couple were commissioned as church planters in Bogotá and seized the opportunity to weave their newfound theology into every aspect of Iglesia Hermanos Menonitas Torre Fuerte (Strong Tower MB Church). “I was excited about participative community, restorative discipline, servant leadership and communal hermeneutic,” he says. “It was so clear that I wanted that kind of values for our new church.” The spirit of community drew new believers, and the church grew and flourished.

García credits visiting teachers with helping Colombian pastors gain a deeper understanding of Anabaptist theology. One of them, Mark Baker, tells a story of how García applied the theology in his role as president of the Colombian MB Conference. At a national convention a delegate vote on a contentious issue barely passed the required 80 percent approval. García was not content with the spirit of the debate or with the narrow margin of approval. He invited the delegates who had voted “no” to voice their concerns with conference leaders and encouraged everyone to reflect, pray and be ready for a new vote the next day. The result was a positive vote of 94 percent, and a strengthened sense of trust and confidence among the conferees.

As much as he values the ideas and principles of Anabaptism, García also cherishes his relationships in the global Anabaptist community. Fellow leaders in Portugal and Venezuela are now counted among his closest friends because of their work together in the International Community of Mennonite Brethren.

Other new friendships have developed among MB, Brethren in Christ and Mennonite church leaders in Colombia. After periods of little interaction or cooperation between the three denominations, he says, “Mennonite Central Committee helped us to realize that in reality we were not so different and that many of the suspicions between us were only that.”

“I have a calling for eliminating suspicions, and rather showing appreciation and respect for differences,” he adds. “There are differences, but that doesn’t mean we have to fragment. The body of Christ is a living organism that demands diversity, but also requires love and unity.”

One of the bridges García is determined to strengthen is the one between people with a long Mennonite pedigree and those who have come to Anabaptist faith more recently. At the same time, he knows from experience the value of coming to Anabaptist faith by conviction, rather than heritage. “It gives the opportunity to have a passion—to fall in love with the tradition,” he says. “We need to value Anabaptism by conviction, but we also need to maintain our historical tradition, and to learn that those things are related, and not opposed,” he asserts. “We are thirsty for identity. In Anabaptism, we find a body that offers that, not just theologically, but also historically.”

García also wants to strengthen the ability of every national body in MWC to find and share its own cultural expression of Anabaptism. “MWC is relevant as ethnic churches bring our own identity and theology contextualized, instead of just copying Western patterns,” he explains. “Enrichment happens when every church brings that kind of value.”

When asked what he values about MWC, García pauses, taking delight in mentally scanning the faces that would be around the table at their meetings. “I value the people who are there,” he responds. “Each one is like a treasure. They bring insights from their different contexts, different gifts, different ways of seeing life and church.”

A year and a half ago, MWC search committee facilitator Bert Lobe of Canada took García aside after a church service and asked him if he would consider being one of the candidates for MWC’s next general secretary. With typical humility, García thought he must have misunderstood the question.

As soon as he realized that the invitation was genuine, he began a discernment process, talking and praying with his wife and composing a discernment group to help them determine God’s direction. Humbly he accepted the nomination, which resulted in his selection as the first general secretary from the Global South.

Few others who know García would consider this appointment surprising. Recognizing his unique gifts of learning and leadership, many have invested in his education and preparation for ministry, including the Colombian MB conference that sent him to complete a master’s degree at Fresno Pacific Biblical Seminary in Fresno, Calif., two years ago.

Perhaps least surprised of all would be García’s mother, Evelia. She was 45 years old when she became pregnant with her son. The doctor advised her that, because of her age, the child was at risk. She pleaded with God for a healthy child and, like the biblical Hannah, consecrated her son to God for ministry.

With a wry smile García remembers how aggravating it had been to hear his mother recount that story during those rebellious teen years. But today he finds it reassuring—a reminder that God’s gifts and blessing have been on him from before his birth. And with this call to ministry comes God’s Spirit to guide and give strength for the task ahead.

García replaces Larry Miller at the beginning of 2012; Miller, who has served as MWC general secretary since 1990, takes on the role of secretary of the Global Christian Forum on Jan. 1, 2012.

Kathy Heinrichs Wiest is a writer from Kingsburg, Calif. This article was commissioned by Meetinghouse, a consortium of Anabaptist publications.

1. Does your congregation have members with a long Mennonite pedigree, or have they come to the Anabaptist faith more recently? What gifts do each of these groups bring to the worldwide Mennonite church? Do you agree with César García that we need to strengthen the bridges between these two groups?

2. García helped plant a new church in Bogotá, Colombia, where he was excited to aim for “participative community, restorative discipline, servant leadership and communal hermeneutic.” What do you think he means with these phrases? Do you agree that they are important Anabaptist values?

4. García says that he “cherishes relationships in the global Anabaptist community.” What dreams or visions do you have for MWC? Will you participate in the MWC assemblies in Harrisburg, Pa., in 2015 or in Indonesia in 2021? How important is it to have a worldwide Mennonite organization? 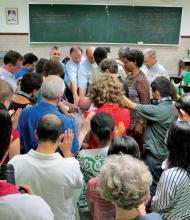