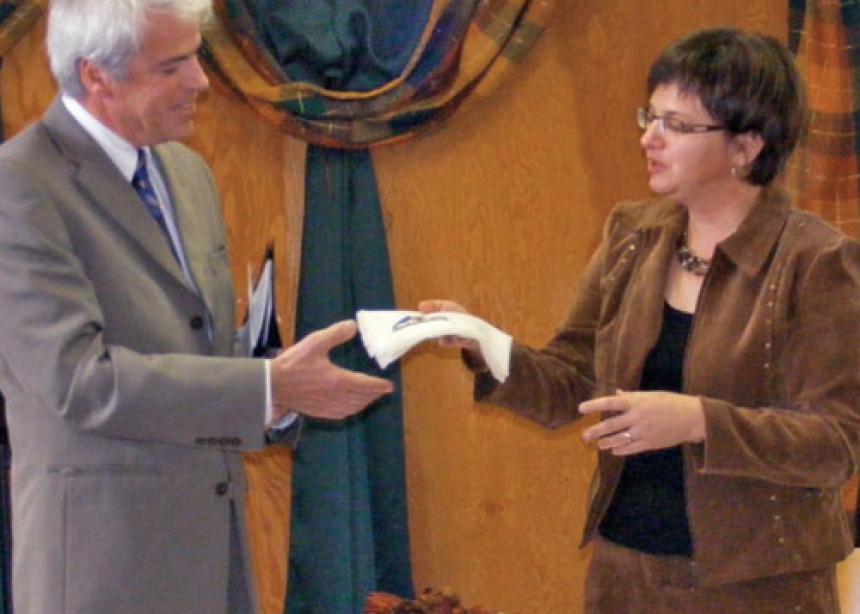 The Reformation Sunday event was planned this spring after word of the Lutheran World Federation’s call for Lutherans to repent of their persecution of Anabaptists over the centuries was announced.

As Rev. Thomas Mertz, co-pastor of St. Paul’s, spoke, many in the Faith congregation were moved to tears. While it had been decided that there would not be an apology during the sermon, Mertz, moved by the Spirit, offered a heartfelt apology on behalf of the Lutherans. He spoke of the beginnings of the Reformation, the need for dialogue forgotten, and the hurt that resulted. Mertz then presented a copy of the Evangelical Lutheran Book of Worship to Faith’s church council chair Jake Fehr, and led in a prayer for the two congregations and their respective denominations.

In response, Ruth Boehm, Faith’s pastor, presented a breadbasket cloth to Mertz for his congregation. She had cross-stitched it for an Anabaptist history project at Associated Mennonite Biblical Seminary. The design was from a pattern book dated 1545 that was printed in Augsburg, Germany. Fehr also presented Yutta Wilson, a member of St. Paul’s Lutheran Church Council, a peace candle on behalf of Faith Mennonite.

After the service, a junior youth member asked if “that stuff between the Lutherans and the Anabaptists really happened.” Another congregant said that he didn’t see a need for an apology at all, while another was so moved that he volunteered to sing at the Lutheran church when the breadbasket cloth was to be used. 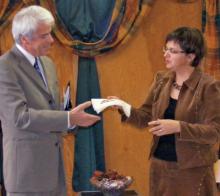