‘The hands and feet of Jesus in a broken world’ 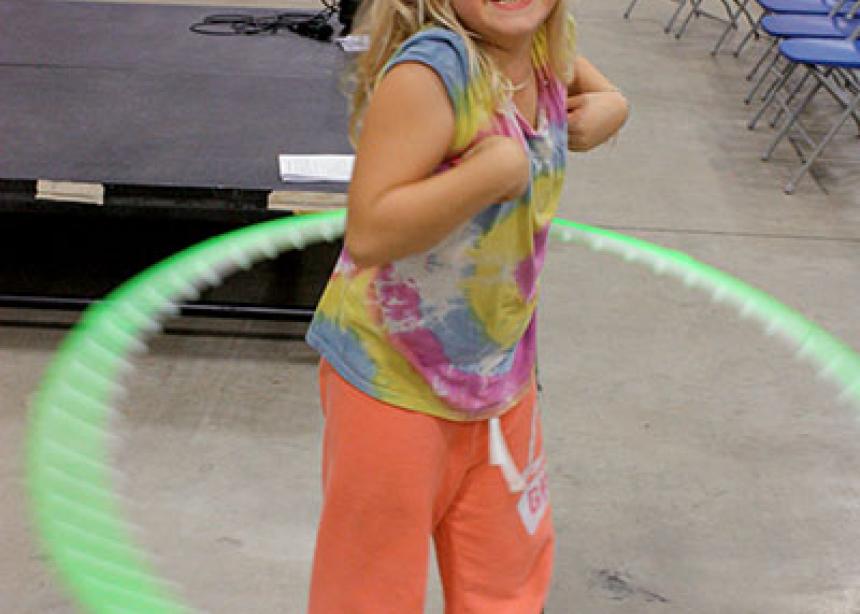 Elizabeth Wiens tries out her new hula hoop that she got at the children’s auction at the MCC Festival. The auction allowed kids and their parents to bid on kid-friendly items and brought in $1,876.

It was a fun-filled, exciting weekend at the annual Mennonite Central Committee (MCC) Festival for World Relief held at the Abbotsford Tradex on Sept. 6 and 7. The annual event raised more than a half-million dollars to support MCC’s relief, development and peace work in more than 60 countries around the world.

Relief Sale coordinator Dora Hoeppner was encouraged by the thousands of people who attended. The atmosphere was one of giving and generosity. “On Friday night, a gentleman bought a tool at the garage sale area,” she said, adding, “He returned on Saturday and told us that he’d researched the item and felt that he’d under-paid, so he contributed another $300.”

But for Hoeppner, the stat that moved her the most was the number of volunteers participating. “We had 1,180 volunteers sign in at the Festival and they were from 75 different churches, including quite a few non-Mennonite churches,” she said. “That literally moved me to tears, as I realized anew what a fantastic ‘coming together’ this is, being the hands and feet of Jesus in a broken world!”

One of the more poignant moments of the Festival came on Sept. 7 at the live auction as the late auctioneer Clyde Dougans was remembered; he had been a fixture for decades at the MCC Festival for 35 years and his wife Joy said this was his favourite auction event. The auctioneers presented Joy and his daughter Jennifer Forbes with a gift.

Forbes also participated as an auctioneer on the weekend and became the first female auctioneer in the history of the MCC Festival.

It will take time to tally up all the donations, but the initial count indicates that the 2013 MCC Festival for World Relief has raised more than $600,000 to help people in need all around the world.

Elizabeth Wiens tries out her new hula hoop that she got at the children’s auction at the MCC Festival. The auction allowed kids and their parents to bid on kid-friendly items and brought in $1,876. 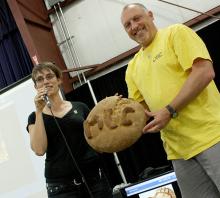 Jennifer Forbes is the first female auctioneer in the history of the MCC Festival. She is pictured auctioning the loaf of bread, which sold for a cumulative total of $172,250 from a number of bidders. Volunteer Tim Kroeker holds the bread.