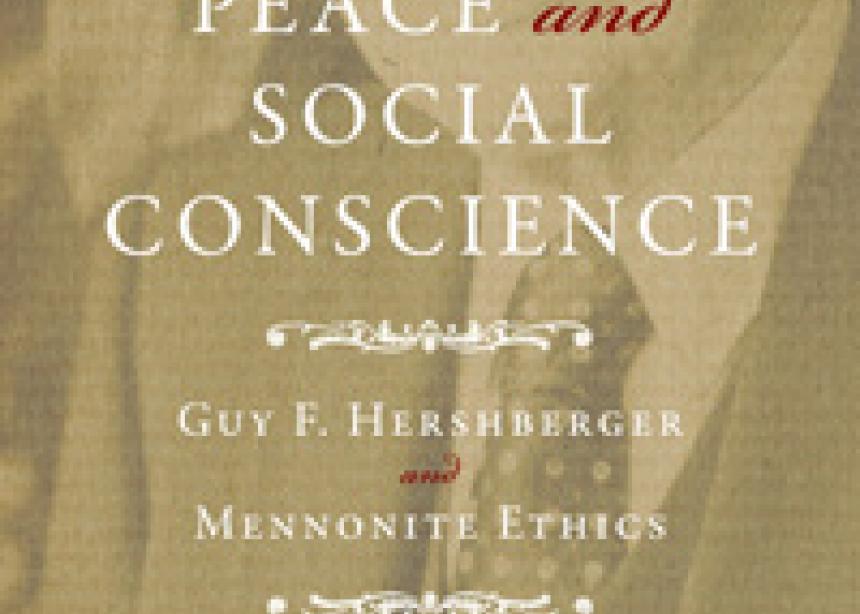 Late in his life, Guy F. Hershberger reflected that 1944 had been a watershed year for the Mennonite Church. That year Hershberger’s book, War, Peace and Nonresistance, was published as was Harold Bender’s essay, “The Anabaptist Vision.”

And during that year, too, Paul Erb took over as editor of Gospel Herald and the Mennonite Church began Mennonite Mutual Aid. During the 1940s the church began to move in a new direction, away from Mennonite fundamentalism and strict separation from the world, toward a new understanding of Anabaptism and social responsibility. According to Schlabach, Hershberger played a significant role in changing how the Mennonite Church related to society as a whole.

In many ways this is a book about Mennonites in the first half of the twentieth century and Hershberger’s role within the church. Schlabach presents him as an earnest yet humble man who was always accountable to his church. Hershberger strove to live out the biblical pacifism that he taught while he pushed the entire church to consider new ways of engaging the world. He was a key player in helping to organize alternative service (Civilian Public Service) and his book articulated the Mennonite position on pacifism. Hershberger was concerned about community and mutual aid and worked tirelessly to organize Mennonite Mutual Aid, an alternative to insurance. Like the Mennonites of his day, Hershberger was anti-union but he tried to find ways that businesses could deal with labour concerns fairly. He also supported the civil rights movement in its early years.

Not everyone admired Hershberger, and Schlabach refers in detail to his conflicts with Rod Sawatsky and J. Lawrence Burkholder. Schlabach questions the accepted interpretation that Hershberger silenced these critics. He says that although Hershberger’s actions were not always above criticism, his premises were misunderstood by Burkholder and Sawatsky. He laments the fact that there was not more open discussion between Hershberger and Burkholder about Mennonite ethics.

This book presents Hershberger as an under-appreciated Mennonite leader who needs to be seen within the context of his time. The Mennonite Church of the early twentieth century was very different from the church of the post-war years and Schlabach makes a compelling case that Hershberger cannot be understood except within that context. At the same time, Schlabach critiques some of Hershberger’s ideas from a modern perspective.

This is a large volume with lots of detail. The narrative is easy to read, but readers unfamiliar with the writing of Reinhold Niebuhr may find some sections tedious. Anyone interested in the history of the Mennonite Church of the twentieth century will want to read this book.