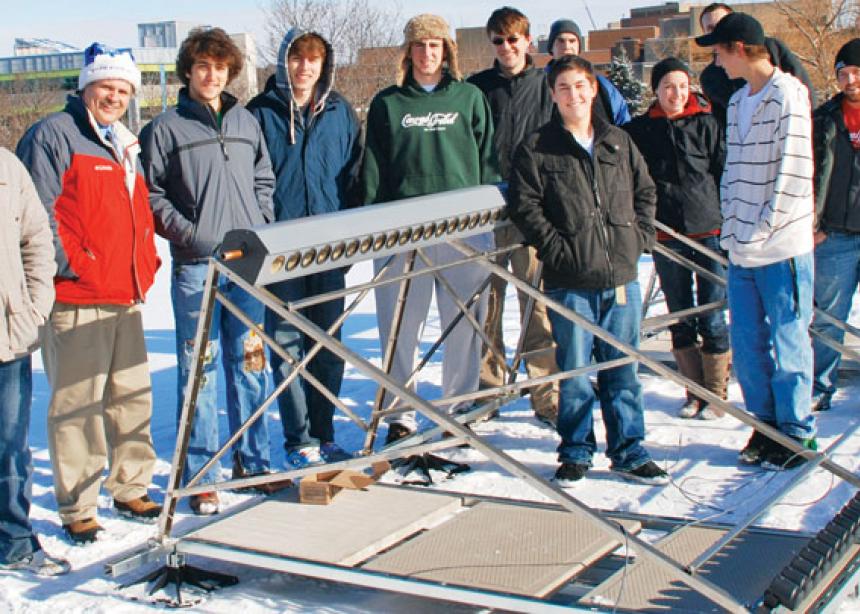 A student group began meeting in 2009 with the hope of taking a more active role in environmental issues in their immediate community. Named Solar Grebel, the group proposed a cluster of solar thermal panels on Conrad Grebel University College’s roof to preheat the domestic hot water used for student showers. With the support of Grebel administrators, these students researched the project, released a request for proposals, selected a supplier and applied for grants.

Jonathan Van Egmond, one of the founders of Solar Global, found the whole process invaluable. “When Solar Grebel first formed, we had no idea where to even start,” he admits. “In completing this project, all the students involved learned what it takes to organize a building and energy project from beginning to end.”

Beyond practical knowledge, Madeleine Bonsma’s reason for joining Solar Grebel was to take a step towards saving the world and to help set a good example. “We, as westerners, grossly misuse our resources, and as a result we desperately need to take action when it comes to environmental and economic justice,” she says. “Solar Grebel provides a way for students to work towards a sustainable and fair society. This technology will ultimately save Grebel money, and it’s a great way for the college to lead by example.”

After several days of construction and installation in chilly December, Grebel’s first solar thermal collector began its endless cycle of heating glycol! Glycol is circulated through pipes that go between a tank in the boiler room and the panels on the roof. City water is passed through the tank and gets pre-heated by the coils of warm glycol before moving on to the boiler. On average, the cold water starts at 10 degrees C. The 30-tube collector on Grebel’s roof will contribute to a 39-degree C rise for every 150 litres of water after eight hours of sun.

The three solar panels will produce 7.82 megawatt hours of electricity, which will ultimately contribute to savings of 936.9 cubic metres of natural gas annually, about 14 percent of Grebel’s current load. More importantly, Grebel’s CO2 emissions will be reduced by 1,981 kilograms.

With hard work and determination, the students managed to secure donations towards a goal of $47,800. Notable supporters included $10,000 from TD, $5,000 from the Grebel administration, $1,500 from Student Council, and $4,140 through government grants. Students in Ed Janzen’s sociology class voted to provide $100 as the most worthy charitable project around.

Once the last $6,000 has been raised, “we hope to expand our current three-panel system over the next several years to a total of nine to 12 panels,” Bonsma says. “Also, if Grebel proceeds with a new building, we would like to incorporate this technology in its construction from the get-go. And if, far in the future, we run out of places to put panels, I think Solar Grebel could continue on as a more general group to make Grebel more environmentally friendly.”