No suspects in the case, but police are interviewing several persons. 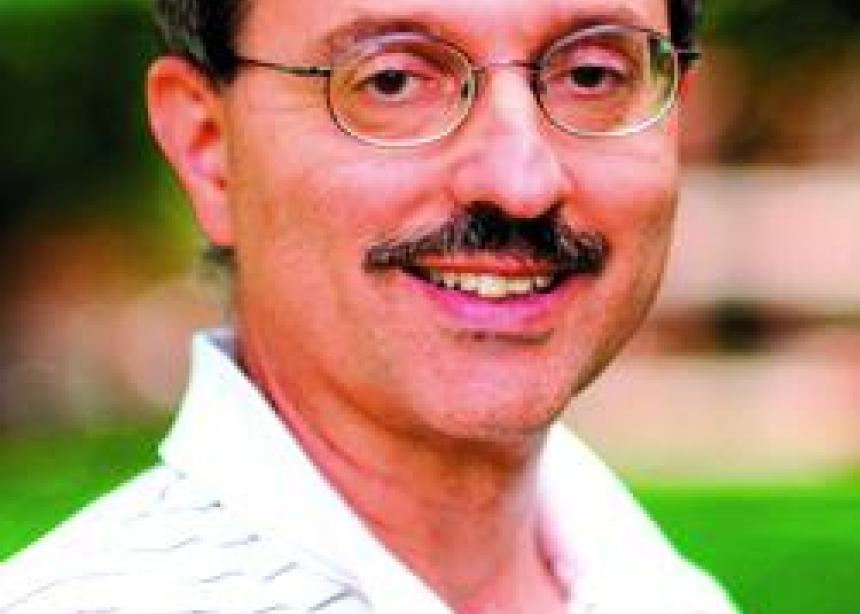 Miller, 58, who taught biology at the college since 1980, and his wife, Linda, were attacked in an attempted robbery around 1 a.m. at their home about two blocks east of campus.

Miller was pronounced dead at the scene as a result of his injuries. An Oct. 10 autopsy revealed “multiple blunt force and sharp force trauma,” according to Elkhart County coroner John White. His death was ruled a homicide.

Linda (Suderman) Miller, his spouse of 20 years and mother of their three grown children, was struck by an unknown object and seriously injured before she called 911.

She is recovering in the hospital from injuries that are not believed to be life-threatening.

Linda is interim pastor of children’s ministries at Clinton Frame. Two of their children were returning from a high school activity and not present at the time of the incident.

Some 500 students, colleagues, friends and community members gathered at 8 p.m. Oct. 9 on campus to mourn Miller’s death, celebrate his life and hold a prayer vigil.

The group circled the plaza outside the Science Building where Miller taught, holding candles and singing hymns. As the vigil ended, President Jim Brenneman noted the group’s collective grief.

“We believe deeply that as we light these candles, we do so in remembrance, in recognition and with a profound belief that light overcomes darkness and that the darkness cannot bear the light,” he said.

Bob Yoder, campus pastor, prayed for the Miller family, the community, the perpetrator and everyone involved in the ongoing investigation. Those gathered wrote messages about Miller on a large pad of paper. Many students wrote memories of his classes and the impact he had on their lives.

The next morning, biology department chair Ryan Sensenig led one of Miller’s classes.

“We were with students for the hour, just sitting together,” he said shortly after the class. “Today and Wednesday are dedicated to being together and trying to mourn the concept of a colleague and friend not being there.”

The college’s scheduled Oct. 10 convocation was changed to focus on Miller. Sensenig said long-term plans for Miller’s classes are forming.  Soon after learning of Miller’s death, science faculty invited students to gather the afternoon of Oct. 9. About 20 students and 10 faculty met in the Science Building.

“We sat in a circle, sometimes in silence, sometimes sharing,” Sensenig said. “There was laughter and there was crying. The point was being together.” Miller was mentoring the most students of any faculty member this year, Sensenig said. “That shows his deep passion for mentoring and partnering with students,” he said. He called Miller a “logistician” who “viewed the world in a way few of us do,” through data. “He was always looking at using the information around him to improve things.”

He noted Miller’s wonderful smile and sense of humor.  “He always infused his lectures with these quirky jokes,” Sensenig said. “He always called students by name, even if they never had him in class.”

Students created a makeshift memorial near the Science Building entrance. Photos of Miller were framed next to a board with several large sheets of handwritten notes.

Maira Santos, a student in one of Miller’s human anatomy classes last spring, wrote personal messages on the board. She spoke to the Goshen News.

“He was a great professor,” she said. “He did everything he could to make sure his students were learning what they needed to learn. He would take his time to explain his lecture all over again to make sure you understood. He was a good person.”

Miller joined the Goshen faculty in 1980, the same year he completed a doctorate degree in medical biochemistry at Ohio State University. He graduated from Bluffton (Ohio) University in 1975 with a bachelor’s degree in chemistry. Miller primarily taught upper-level courses for students in nursing, pre-medical and other health-related tracks.

An increase in patrol cars from the Goshen Police Department and the Elkhart County Sheriff’s Department was noticeable Oct. 11 in the neighborhoods near the Millers’ home, the Goshen News reported.  On Oct. 11, Goshen police released a description and artist’s sketch of the suspect.

Police Chief Wade K. Branson said there were no suspects in the case. But he said the police were interviewing several individuals.  Mayor Allan Kauffman also spoke at the press conference. He expressed his condolences to the Miller family, Goshen College and the local community. He urged the community to take common-sense precautions.

More than 300 people gathered for a prayer and worship service Oct. 12 at Clinton Frame Mennonite Church in Goshen.  The service — delivered by a live video feed to Linda’s hospital room, where at the time she was recovering from injuries sustained in the attack — included music, silence, prayer and Scripture reading.

Anita Yoder, pastor of worship and music, read a statement that Linda wrote Oct. 12. “Last Sunday I lost my best friend and partner in parenting,” Linda wrote. “Whenever I think of Jim, I see him in heaven, standing without pain and smiling; his pain is over.”

Peter Suderman, Linda’s brother, talked outside of the service about his sister, who was released from the hospital and is recovering at home. “Linda is doing as well as could be expected, maybe even better,” Suderman said, according to the Elkhart Truth. “From a physical point of view she’s gaining strength every day. From an emotional point of view it’s very difficult to deal with. We are impressed with the way she’s handled this.”

Suderman also spoke about the at-large perpetrator.  “We are hoping that the individual who did this will turn himself in,” he said. “Here’s a person who needs God’s forgiveness. He also needs our forgiveness. That’ll be hard for us to do. But I can say that as a family, we would strive to do that.”

He was preceded in death by his father, Oscar.