With God, all things are possible

Residential school survivor recalls childhood abuse, but has come to forgive his tormentors 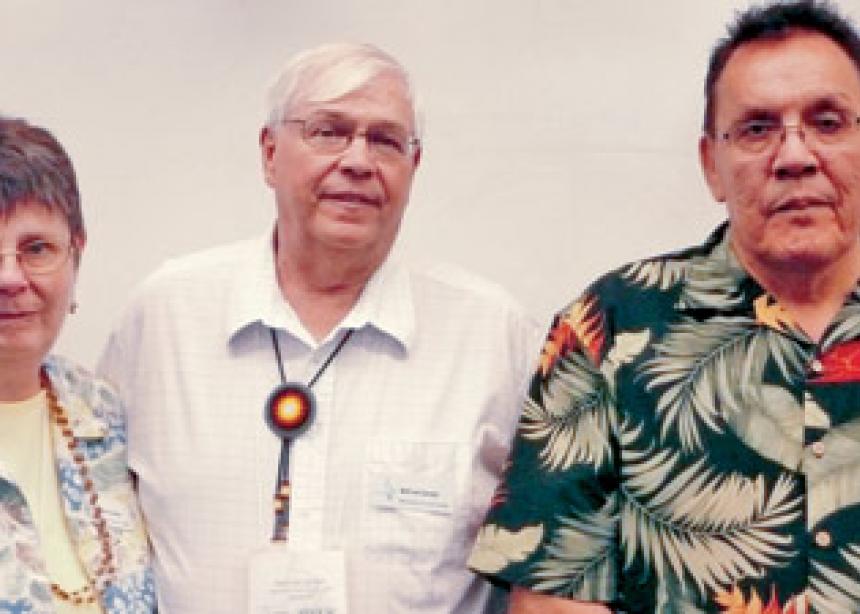 When you pass by aboriginal people lying in the gutters on skid row, do you think that they are just “drunk Indians who need to get a job”?

Participants of the “Do residential schools and good news go together?” workshops at this summer’s Mennonite Church Canada assembly now know what those “drunk Indians” went through to get to that place. What they went through was “a blight on [Canada’s] history,” said Larry Plenert, a workshop speaker and an adjudicator for the Truth and Reconciliation Commission of Canada.

The participants heard from Darrell Royal, a Blackfoot member of the Siksika Nation in Alberta, who attended two residential schools—St. Joseph’s (Catholic) in Cluny, Alta., and Old Sun (Anglican) in Gleichen, Alta.—until Grade 7, and was a self-confessed “drunk Indian” until God intervened, sparing his life, his family and his soul.

He said the days spent at the school were abominable. He was malnourished and fed mostly rotten meat, and suffered physical abuse. “The meat was green, you could smell it,” Royal said, adding, “We were always hungry.”

Hit on the head regularly with a heavy wooden stick resulted in seizures and problems with his eardrums, he said, not to mention the emotional trauma. “I shut down for many years afterwards,” Royal said. “I had a wall and didn’t trust people. . . . I didn’t know that I didn’t have feelings for anyone.”

Royal said he was also held in ice cold and extremely hot showers for up to 30 minutes as punishment for speaking his native tongue. “To this day I can’t go in a sauna . . . or take a hot shower,” he told workshop participants. “Every day when I take a shower I remember. . . . I can only take warm showers.”

Being so emotionally crippled from his childhood experiences at the residential school, Royal said he grew up full of hate. An alcoholic by age 16, he became involved in a string of crimes, including assaults in bar brawls, domestic violence and attempted murder.

Royal, who now leads programs in anger management for men and women, a culture camp for kids, and a program for domestic violence, spent 20 years of his life behind bars.

Constantly drunk and violent, with his wife on the verge of leaving him, his life was in ruins—until a preacher came to his First Nations community on Sept. 20, 1981. The bad feelings Royal had experienced for so long, vanished. He could feel something other than hate and pain when he accepted Jesus Christ into his heart and life.

In the 30 years since, Royal’s marriage has come back together, he is sober, and has recovered from alcohol-induced cirrhosis of the liver and brain deterioration. He became a police officer in Calgary, attended Bible school, and was pardoned for all of his crimes.

But it wasn’t an overnight transformation. He is still apologizing to his wife for hurting her and still deals with the trauma of his abuse, even decades later.

Royal has come to forgive those people who beat and belittled him, and tried to erase his heritage and culture. It took a long time to get to this place, but that he has been able to is all because of his relationship with God, he said.

He has still not received apologies from any of those who physically harmed him when he was a child, even after meeting with them years later. But he said that “forgiveness is the key to healing. Some of the things that have happened to me, if it wasn’t for the Lord, I wouldn’t have been able to forgive.”

“A first step toward healing”- A personal reflection on the first TRC events, held in June 2010

“For discussion: August 23, 2010 issue”- Questions for reflecting and discussing