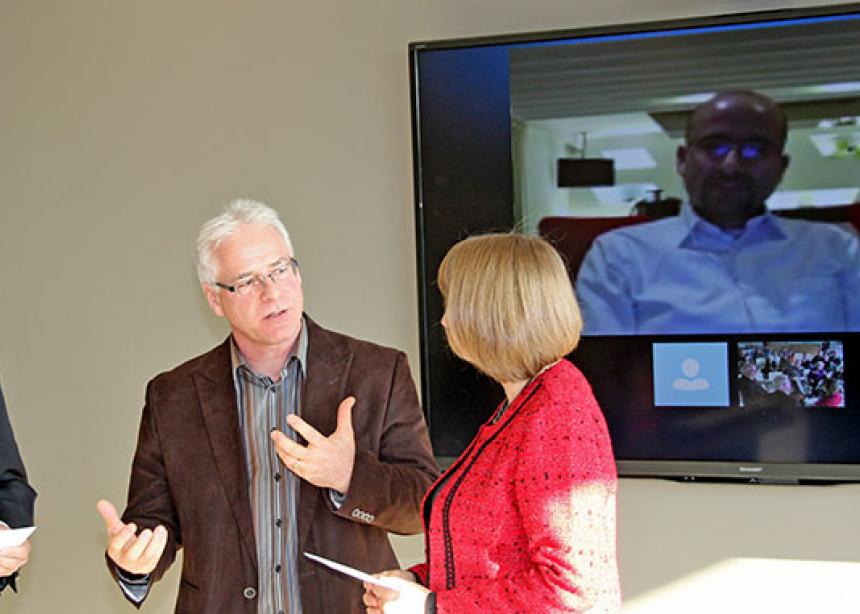 The new meeting room at 50 Kent Avenue was full of Mennonite Church Eastern Canada staff and representatives from many other Mennonite organizations from the Waterloo area on Oct. 30, as the area church and the Shantz Mennonite congregation of Baden began "tithing" to the wider church money they had received as the result of a large bequest.

The $400,000, shared between Mennonite World Conference (MWC), whose general secretary, César García, participated in the event from South Korea via Skype, and MC Canada, is a tithe of the amount the area church and Shantz have each received to date from the estate of Harold and Enid Schmidt.

According to Don Penner, pastor at Shantz, there is more to come as properties, farms and businesses belonging to the Schmidt estate still need to be sold.

At the gifting event, Arli Klassen, MWC development manager, received the gift, reiterating what García had noted: These monies will help the four new commissions of MWC—Deacons, Faith and Life, Missions and Peace—get going with their work.

This gift has been developing over the past couple of years, following the death of Enid Schmidt in 2011; her husband Harold died in 2001. Without children, they have given the lion's share of their large estate to MC Eastern Canada and their home congregation of Shantz Mennonite.

David Martin, executive minister of the area church, said that MC Eastern Canada's understanding was that the bequest came free of guidance except "to advance the church." Upon receiving knowledge of the estate, MC Eastern Canada developed a new policy for dealing with the Schmidt bequest and others, which was approved by the delegate body in April.

The policy states that these "above-budget" gifts should not be used as a substitute for the ongoing generosity and commitment of congregations, individuals and ministry partners to the vision and mission of MC Eastern Canada. Instead, bequests are an opportunity for the church to celebrate, nurture and expand generosity.

The plan is for any bequest to be spent over a period of 10 to 15 years, and not be put into an endowment to provide interest income for the area church. To that end, MC Eastern Canada has begun by tithing from what it has already received to other organizations.

Shantz has followed a similar path, gifting more than $250,000 worth of interest it has already received to a number of organizations suggested by congregational members. The church is considering whether to tithe on the principal amount as well. Shantz had been considering a building project for some time, but does not want the bequest to sideline clear thinking about the church's needs and God's call to the congregation.

A future use of bequest money by MC Eastern Canada will be to invest in technology so congregations that can't easily attend area church events because of distance constraints can receive live streaming of them.

Both the area church and Shantz Mennonite have invested the principal they have received to date and are taking their time in gifting.

Shantz invites applications to bequestdisburse@shantzmc.ca. For guidelines, visit the church website at www.shantzmc.ca.