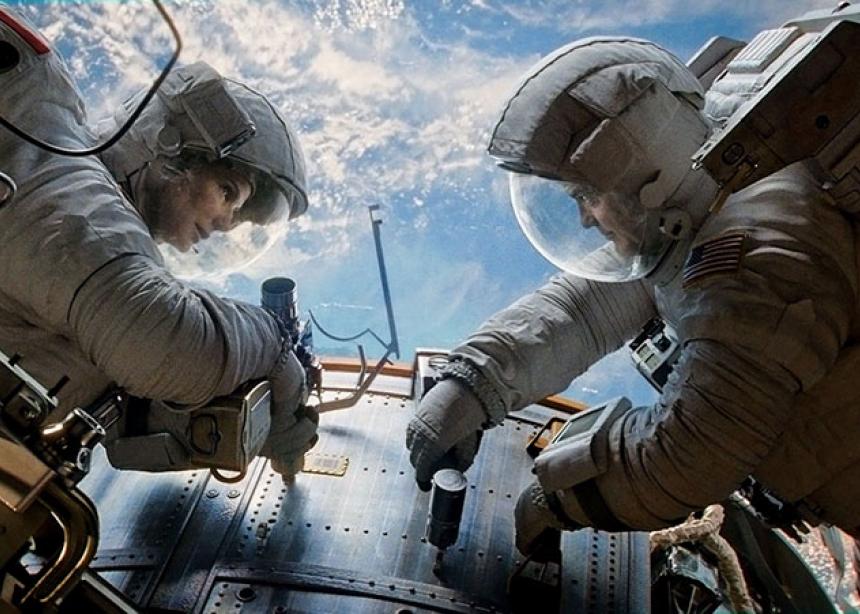 “Houston, I have a bad feeling about this mission,” says Matt Kowalski as he dances circles around the space shuttle Explorer, which is in orbit around the Earth. His words come early in this fall’s blockbuster film, Gravity, an awe-inspiring work of cinematic art. Despite the “gravity” of Matt’s words, it’s just his way of introducing the stories he likes to tell about his life as he drifts in space, although it also serves to foreshadow the catastrophe that is about to strike.

Matt is played by George Clooney, who is perfectly cast as the calm, laid-back, know-it-all astronaut who likes to talk. Matt and scientist Ryan Stone—played by Sandra Bullock, in what must be her best performance—are making repairs in space when a Russian attempt to destroy one of its own satellites goes awry and sends satellite debris flying around the Earth at the speed of a bullet. Matt and Ryan are caught in the path of that debris and soon find themselves stranded and running out of oxygen. Thus begins a relentless thrill ride that leaves viewers also gasping for air.

There are some obvious allusions to 2001 in Gravity, but the slow-moving 2001 has a very different feel than the fast-paced Gravity. Both films, however, represent the cutting edge of filmmaking.

While I am no fan of 3D, there’s no question that, in Gravity, 3D brings you closer to the action and makes you feel like you’re with the astronauts in space. It also heightens the beauty and wonder of seeing Earth floating below you.

“You should see the sun shining on the Ganges. It’s amazing!” Matt says to Ryan at one point in the film. Experiencing the wonder of space and of our marvellous planet is one of the joys of viewing this film. I would argue that in such an environment it is very easy to find God. This is what happens to Ryan in Gravity and it also happened to me as I watched.

Film critic Gareth Higgins suggests that “going to the cinema can be a spiritual experience akin to worship.” I have found God in many films over the years, especially in films that heighten our sense of wonder at the world God has created. But it is rare these days to see characters in Hollywood films having a spiritual experience of their own, which is what happens to Ryan.

In a moment of despair, she reaches out to her four-year-old daughter, who died some years before in a playground accident: “Please pray for me,” she says. “I have never prayed. No one ever taught me how.” Just before that, the camera had zoomed in on a picture of Jesus which a Russian astronaut had pinned to the control panel. This is the beginning of my favourite scene in Gravity, which I won’t spoil for you by saying more.

Long before taking this first trip into space, Ryan’s life had lost its meaning. Now, in the stark lifeless environment of space, she must repeatedly confront death and decide whether she wants to choose life. Her crisis is depicted in various ways—some subtle, some overt—and more than once Ryan chooses death, but the film as a whole conveyed to me the message that life, and the universe that houses it, is a gift of God that deserves to be cherished and celebrated no matter what our circumstances are.

So, while at one level Gravity is a simply told disaster flick, at another level it is a profound reflection on life, death, God and being human. This is made possible by the quality of the filmmaking, with special effects second to none, a score that perfectly enhances the action, a tightly nuanced screenplay by Cuarón and his son Jonas, and excellent acting.

Perhaps I loved this film so much because I always wanted to be an astronaut, although few will see the appeal of that profession after viewing Gravity’s terrifying intensity. If that description doesn’t scare you, then you need to watch this film on the biggest screen you can find. Few Hollywood films made in this century have captured the magic and potential of filmmaking the way Gravity has, so perhaps it isn’t time to give up on Hollywood just yet.