A fresh reading of the Apostle Paul 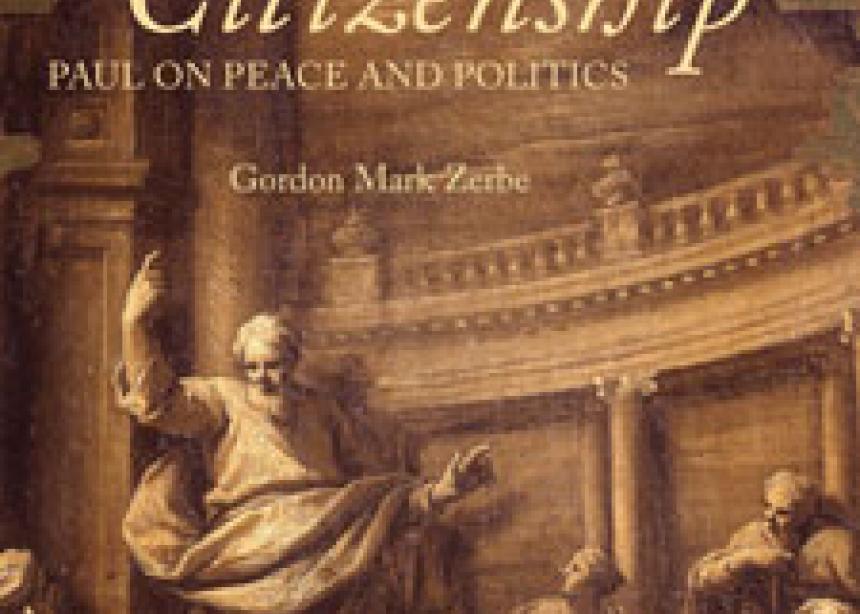 CMU Press of Winnipeg describes its latest release, Citizenship: Paul on Peace and Politics, by Gordon Zerbe, as a collection of essays that offers “a revisiting of Paul’s theological vision and practical activism around the theme of citizenship.”

Zerbe, a professor of New Testament at Canadian Mennonite University (CMU), Winnipeg, is the author of Non-Retaliation in Early Jewish and New Testament Texts, as well as a contributor of two essays to The Colonized Apostle: Paul Through Postcolonial Eyes (Fortress Press, 2011): “The Politics of Paul: His supposed social conservatism and the impact of postcolonial readings,” and, “Constructions of Paul in Filipino theology of struggle.”

The chapters in Citizenship are organized according to the citizenship themes of loyalty, mutuality and security. Essays in the “loyalty” section draw attention to the fundamental personal and corporate dynamics of citizenship in the context of Paul’s ecclesial politics. The “mutuality” section is centred mainly on the internal features of the Messianic assembly as a citizen community, including its approach to social diversity and economic disparity. The “security” section includes essays that investigate the questions of violence, peace and warfare in, and pertaining to, Paul’s writings. A last section, “affinities,” engages Paul’s perspective with broader conversation partners beyond the fields of biblical and theological studies.

Zerbe attributes his most significant inspiration for the interpretation of Paul to four years of learning and teaching in the Philippines as a visiting professor at Silliman University Divinity School, Dumaguete City (1996-98 and 2002-04). Born and raised in Japan, Zerbe continues to take an interest in intercultural engagement, having completed an MA in cultural anthropology from Western Washington University in 1987.

Mark Reasoner, author of Romans in Full Circle: A History of Interpretation, describes Zerbe’s latest book as “a wonderful introduction to social and political issues in the Pauline corpus, making a significant contribution in Pauline studies and in political theology.”

Neil Elliott, author of The Arrogance of Nations: Reading Romans in the Shadow of Empire, describes these essays as “exegetically judicious and boldly creative,” and adds that, “by organizing these essays around aspects of ‘citizenship,’ Zerbe provides the most nuanced and compelling description we have yet seen of the political dimensions of the apostle’s thought and praxis.”

Zerbe earned a Ph.D. in New Testament from Princeton Theological Seminary in 1991 and has taught at CMU since 1990.