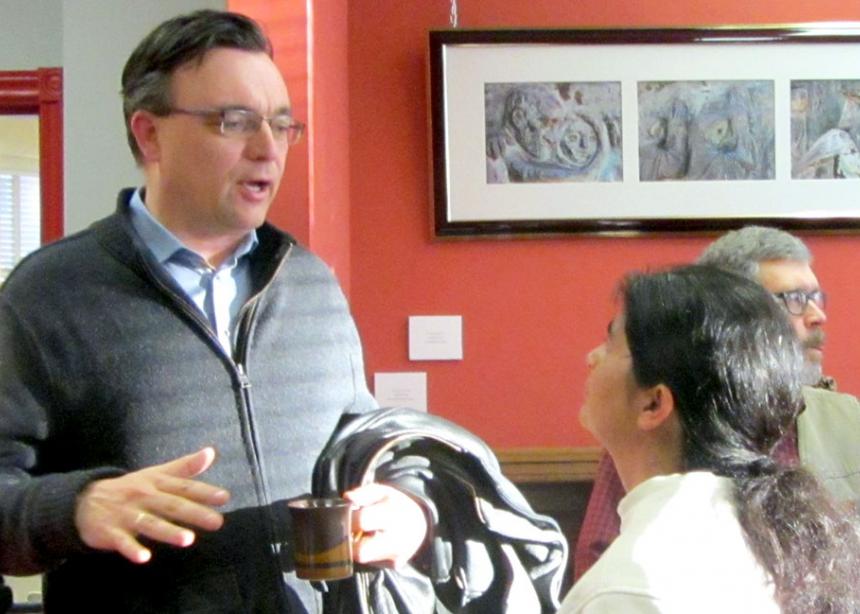 If a buffalo shouts or a salmon cries in a forest, does anybody hear?

A packed room of 50 people at the Toronto School of Theology (TST) hung on every word of four panelists gathered on March 18 to discuss Buffalo Shout, Salmon Cry: Conversations on Creation, Land Justice and Life Together, the 2013 Herald Press book edited by Steve Heinrichs, Mennonite Church Canada’s indigenous relations director.

The purpose was to assess what strategies Buffalo Shout offers—or doesn’t offer—for the ongoing struggle to address the challenges of “settler-indigenous” relations in North America. More broadly speaking, the aim was to gather diverse people together, to see others face to face, and to both express and listen to concerns from the inhabitants of “Turtle Island.”

The Right Rev. Mark MacDonald, who became the Anglican Church of Canada’s first national indigenous Anglican bishop in 2007, praised the book’s format, which, he said, “communicates a very complex and difficult reality in a very good way,” and approximates the “four-directional thinking” of Canada’s indigenous peoples, who, instead of hitting a topic head-on, tend to walk around it and approach it from several angles.

The complex reality of indigenous peoples, he said, is the fact that only about 5 percent conform to the fiction of a pure “aboriginal” heritage, with another 5 percent totally assimilating. The remaining 90 percent develop a strategy for survival involving a constant “complex negotiation.” For many of them, Christianity serves as a translation or software system that allows them to speak in different worlds they inhabit.

Jennifer Henry, executive director of Kairos, shared from her perspective as a settler who faces the grim realities of the unreconciled communities in Canada. The very integrity of Christianity is at stake in the task of deconstructing the oppressive forms of theology that celebrated domination in the colonial context, she said. At the same time, there are genuine elements that this same broad tradition possesses that can redeem itself. She expressed hope that her daughter would one day realize what seems but a dream amid the current nightmarish reality.

Chris Sabas, an attorney and member of the Christian Peacemaker Teams (CPT) Aboriginal Justice Team, joins indigenous communities in North America that invite others to oppose further injustices. She affirmed a statement in the book about supporting indigenous struggles “in a posture of reparations.” She described how CPT’s task of “undoing oppressions” has recently become more deeply self-reflective, even questioning whether the Aboriginal Justice Team name might effectively maintain a structure of oppression, rather than undo it.

Rev. Dr. Alan Hayes, TST’s director, moved the participants toward a more general discussion of the present crisis in Canada, seeking to expose, rather than hide, the ongoing challenges, and admitting to no easy solutions. A key issue was the challenge of how naming the “peoples” involved—whether “settler” or “indigenous”—are helpful terms. Equally difficult was the issue of reparations and a just future for all parties.

Two years ago at meetings of the Truth and Reconciliation Commission, Hayes had offered a blank notebook on behalf of TST and its member colleges, as an expression of the desire for reconciliation. He asked forgiveness for those times when theologies have presented Jesus as “an agent of foreign imperialism, like my people. He was a victim of foreign imperialism, like [indigenous] people.” (http://www.tst.edu/about/news/tst-offers-expression-reconciliation-trc)