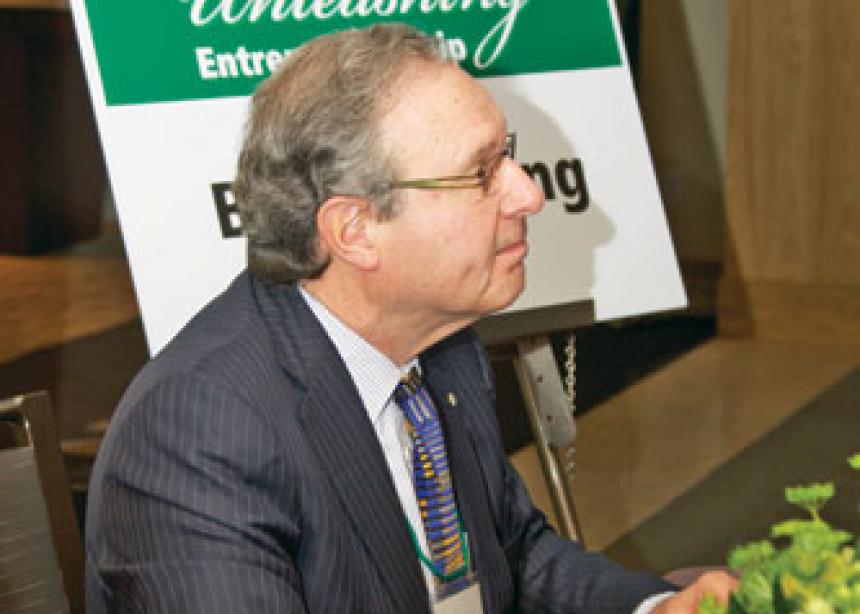 Speaking to the annual convention of Mennonite Economic Development Associates (MEDA) in Calgary, Alta., last fall, he said he had hit rock bottom on the streets of Toronto, a homeless panhandler begging for nickels and dimes to buy cheap wine or a night at a 50-cent flophouse. Then he got a second chance at sobriety.

His audience of 400 was transfixed by his story of unearthing hidden potential and “unleashing entrepreneurship,” the convention theme. He explained how he parlayed his mounting successes into the co-founding of Second Cup, which now has hundreds of outlets across Canada.

After selling his share in the company, he moved on to other business and service ventures, founding Street Kids International and the Canadian Landmines Foundation. He eventually received the Order of Canada, the country’s most prestigious civilian honour.

“With a little hope, vision and action you can change the world,” he said.

Another keynote speaker—a global authority on faith and business—laid out a framework for Christian ethics to bolster entrepreneurship in daily life.

Miller asserted that “the corporate world can be a moral community,” and a good starting point is for firms to see themselves as “producing goods and services for humanity to make this world a better place.”

While western business has suffered greatly from greed and misbehaviour, Miller sees evidence that a new generation “doesn’t want to play the game the way it has been played.” He encouraged businesspeople to build “faith-friendly” companies that go beyond mere tolerance and recognize that “the spirit is part of the people we hire.”

MEDA president Allan Sauder reported that 2010 had been “a very successful year,” despite ongoing uncertainty in the global economy. “Most gratifying, we were able to help over 9.4 million families to live healthier, happier lives through 101 partners in 45 countries.”

He said donated funds had unleashed matching funds by a 10-times ratio, adding, “Your $3 million contributions translated into nearly $33 million of programs. Every dollar you donated was able to do the work of 11.”

Three days of attention to “unleashing entrepreneurship” concluded with a challenge to turn inward and find spiritual freedom to unleash even greater service in the world.

Pennsylvania pastor Jane Hoober Peifer noted in her message that entrepreneurs, at their best, mirror “the creative, risk-taking, problem-solving, empowering and enabling characteristics of God.” But, she added, there is still more room to grow in spiritual stature, suggesting that the circumstances of business, such as meagre profits and striving to satisfy regulators, could “tether” and “tie down” the energy, ingenuity and creativity of entrepreneurs.

Hoober Peifer said Paul’s message to the Galatians pointed to a spiritual freedom by which entrepreneurs could “let go” of binding ropes. “Don’t let yourself be tethered or held down by the things of this world, or by the power of your self-serving ego,” she said, “but tether yourself instead to love, to the Spirit of Christ, the presence and love of God. Tether yourself to that place within you where Christ meets you and has set you free, which will then empower you to serve one another, to become servants to one another.”