Former Bible school helped shape the call for many pastors 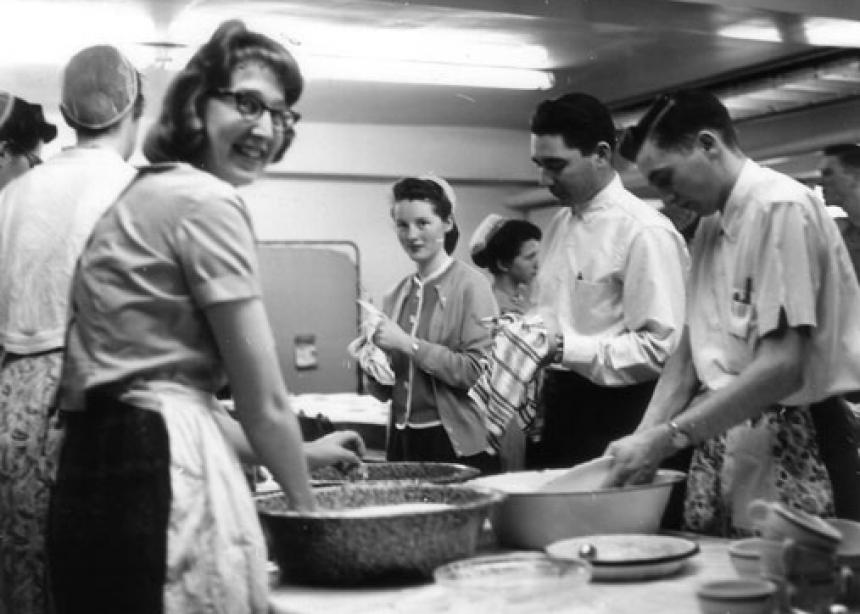 The Bible school students of 1964 take their turn doing the dishes at lunch.

About 140 former students and spouses of Ontario Mennonite Bible School and Institute met at Mannheim Mennonite Church, Petersburg, Ont., for a reunion on May 29.

Laverne and Norma (Bauman) Martin were married 50 years ago, and, to celebrate, she began planning this reunion. She had kept in touch with others who graduated in the 1959-60 year, but decided to invite all former students. Unfortunately, Norma lost her battle with cancer in February, and so others carried out her vision for this get-together.

During the formal sharing time, Laverne lit a candle to remember Norma and her plans to celebrate with old friends from Bible school. Everyone was reminded of how their young lives were shaped by their experiences at the school and institute.

Ontario Mennonite Bible School began in 1907 to provide spiritual growth for young people through study of the Bible. It became centred at First Mennonite Church, Kitchener, Ont., as a several-week, full-day school for young people who had less farm work in the winter months. Students boarded in local homes with some meals served at the school. In 1927, a large annex was added to the church to provide study space for young people from across Ontario and from other Mennonite communities in Canada and the United States. Attendance reached its peak in 1939.

The Bible school was an inter-Mennonite experience, bringing together students from a variety of locations, including the local Amish-Mennonite Conference. This interaction helped to bring together the groups that now form Mennonite Church Eastern Canada.

Like other Bible schools, this one resulted in many romances. “It was known as the match factory,” said Herb Schultz, a teacher from 1962-69.

By the 1940s, some young people were attending local high schools, while a few studied at church colleges in the U.S. In 1951, the Ontario Mennonite Bible Institute was organized to provide an advanced course of Bible teaching to prepare workers for Christian service. The 1950s was also the time when churches began choosing trained pastors from outside, rather than ordaining untrained men from within congregations.

Schultz reflected that the Bible institute experience “whetted the appetite and clarified the sense of call for many people who then went on to seminary.” He also observed that young people raised in more-conservative Mennonite congregations found attending Bible school a way to become acquainted with the Mennonite Conference of Ontario setting.

Gordon Bauman was one such student. He was raised in the Old Order Mennonite Church and so left school after eight grades. He was interested in more education and so began attending the Bible school and later the Bible institute. During this time he was called to be the pastor of Berea Mennonite Church (now part of Community Mennonite Fellowship, Drayton, Ont.), and was ordained in 1955. He had felt a conviction to serve the church, but was a bit surprised to be called as a pastor before graduating. “I might well not have become a church pastor had I not attended [the institute],” said Bauman.

Amzie Brubacher also came from the Old Orders and attended the Bible school because he had no work in the winter months. He, too, was not planning to go into pastoral ministry, but said, “In my last year I was encouraged to consider giving leadership to a mission outreach,” which developed into a career as a pastor. He said the Bible school “was an important experience in broadening my view of belonging to a larger church family.”

At the reunion, a pastor from the U.S. shared the story of how five young men sat in principal J. B. Martin’s office late one night, talking and dreaming about who would be called to serve. He didn’t say precisely what Martin said after he walked in, but all five men followed the call of God to serve in church leadership. The list of former pastors and other church workers who attended the school and institute is very long indeed.

The school and institute, which played an important role in its day—bringing young people together, nurturing their faith and teaching them to sing—closed in 1969.

With notes from J. Lester Kehl. 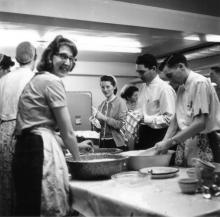 The Bible school students of 1964 take their turn doing the dishes at lunch.