Death threats forced Jose Rivera, his wife Maria and their two children to flee Colombia in 2002 and rebuild a new life in St. John’s. 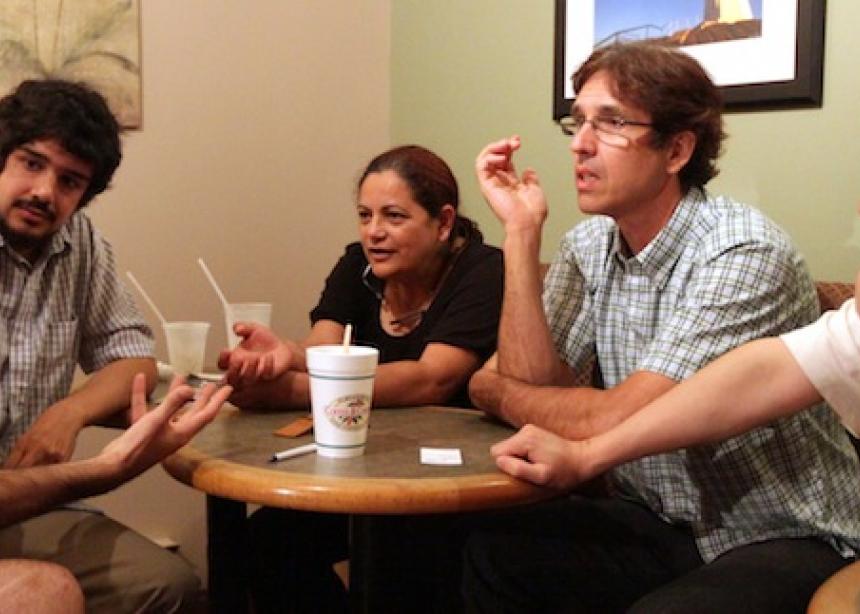 Jose Rivera understands the diverse needs of newcomers as they try to develop a sense of belonging in a new country.Death threats forced him, his wife Maria and their two children to flee Colombia in 2002 and rebuild a new life in St. John’s.

“The bad guys said you have 72 hours to get out of here or else,” he said. “When we got here we had to figure it out, how to manage living here. I ended up at the refugee council for help.

Now serving as the executive director of the refugee council—the Refugee and Immigrant Advisory Council (RIAC)—he uses his experiences to offer a safe, peaceful and welcoming setting for newcomers.

RIAC, supported by Mennonite Central Committee (MCC) since the early 1980s, is rooted in the work of grassroots community organizations that got together to share resources as they welcomed newcomers from many other countries.

“When people come to a new country they feel lost,” he said. “The first big need is information but they have many other needs.  We are here for them. We are like firefighters—we have to be ready for everything.

”One of the most pressing needs of newcomers, he explained, is learning the English language. Twice a week, RIAC offers conversation classes to give newcomers the opportunity to practice English language skills through group discussions and activities.

Under the guidance of RIAC group leaders and volunteer mentors, participants develop friendships as they learn more about each other in a relaxing, friendly group environment.

At a recent Monday evening conversation class the group shared information about their work and festivals in their home countries. Weiwen Ye, originally from China, works in the kitchen of a restaurant, Izet Elezovic, originally from Bosnia Herzegovina, drives a school bus, Payam Bagheri, originally from Iran, works in a lab and Rivera’s wife, Maria del Pilou Ofunoz of Colombia, volunteers at RIAC.

“This class is good for me—I use this class to learn English and to get to know new people,” said Bagheri.

The conversation classes are among a broad range of language and settlement services offered through RIAC.  Other services include skills assessments, job-searching support, counselling, moral support and referrals.  RIAC also hosts public education forums and workshops on issues relating to immigration and cultural sensitivity.

This support, said Rivera, is made possible through the commitment of about a dozen volunteers and financial support from organizations such as MCC. The agency has two staff funded through donations and income generating projects, such as the job support programs.

Currently, MCC’s financial contributions are being used to cover telephone and other office costs. “Just knowing that someone is taking care of our phone bill is very helpful,” said Rivera. “At least we have a phone, we have communication.”

MCC’s support, he added, is also helpful when RIAC is applying for funds from government or other agencies.  “To have a national organization like MCC supporting us is very meaningful,” said Rivera.