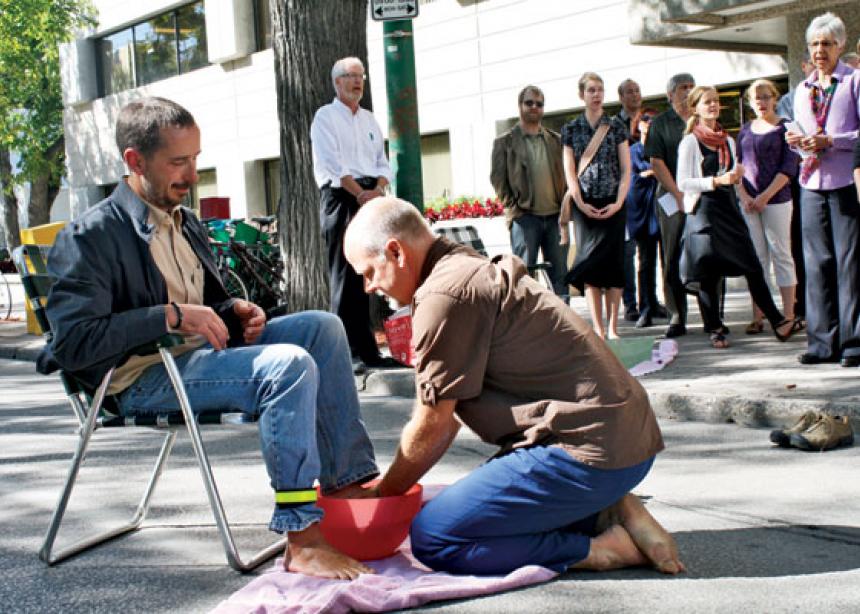 New Order Voice columnist Aiden Enns washes the feet of Kenton Lobe in downtown Winnipeg, Man., on Sept. 24 during a protest against climate change brought about by the West’s reliance on oil.

As the sounds of hymns overpowered the hum of car engines revving at a red light, a city transit bus had passengers clamouring to open windows out of curiosity about the sights and sounds of worship on the sidewalk around them. It was an unusual sight for a September Saturday afternoon in front of Winnipeg’s Canadian Revenue Agency building, where more than 50 people had gathered to pray for climate justice.

Following the global protests of 350.org, which bills itself as “a global grassroots movement to end the climate crisis,” participants went beyond the simple protest march and joined together in a worship service on the busy downtown streets for an hour of song, prayer and foot washing.

The event, which stemmed from discussions of peace and justice issues in Mennonite churches in Manitoba, was a response to North America’s growing reliance on oil, including the proposed controversial Keystone Pipeline and Alberta Tar Sands, the latter of which is claimed to be the biggest environmental degradation in North America and a strong contributor to climate change.

Moving worship from the confines and strictures of the church to the street served to blur the lines of distinction between church and society. “We gather today to worship God, Creator of heaven and earth. We have become aware that our reliance on oil has harmed God’s good creation. We will confess our sin, lament the harm we have done and seek healing,” prayed worship leader Carolyne Epp-Fransen. a member of Charleswood Mennonite Church.

The event culminated in an act of foot washing. While some chose the safety of the sidewalk, others opted to step out onto the street, blocking one lane of traffic and violating the Highway Traffic Act.

Kenton Lobe, another Charleswood member and one of the protest’s organizers, acknowledged the risk of arrest and the $200 fine that accompanied it, but he was quick to put this into perspective: “A $200 fine is a paltry outcome compared to the drought and to the suffering that climate change and, ultimately, our oil consumption has caused. Should we not be prepared to risk more than that?” he challenged.

“It’s very nice to see people put their voice out there, to see people coming together for a good cause,” said Dacia Christian, an observer and self-described atheist who enjoyed witnessing the public act of faith.

As the event drew to a close, police showed up and requested that the foot-washing station be removed from the roadway. “This protest is about oil, so we felt we needed a worship place that included the street,” Epp-Fransen explained to the officers.

With police joining the mingling crowd, Leah Klassen said she thought the protest had been effective. “To see others strengthened my conviction to live differently,” she said. “It was important to see protest in a peaceful and respectful way.”

New Order Voice columnist Aiden Enns washes the feet of Kenton Lobe in downtown Winnipeg, Man., on Sept. 24 during a protest against climate change brought about by the West’s reliance on oil.