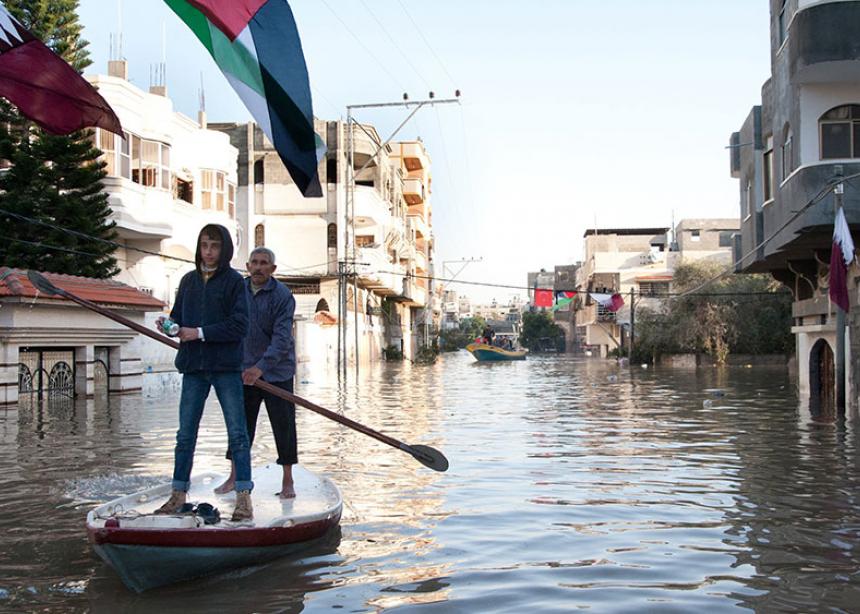 ‘The occupation has meant a lack of income for people, and that makes this natural disaster a catastrophe,’ says Khalid Abu Sharekh, chair of Al Najd, a Mennonite Central Committee partner, of the flooding in Gaza shortly before Christmas.

A week after torrential rain battered the Gaza Strip, people in the al Nafaq Street area of eastern Gaza City were still struggling to clean mud and debris out of their homes and businesses just before Christmas.

Flood waters initially swelled to 3.6 metres  within 12 hours on Dec. 11 and 12, 2013, before receding to about 2 metres of sewage-contaminated water on sections of the street. The flooding caused 400 households to lose everything and about 100 people were hospitalized because of frostbite or upper respiratory infections.

Using small fishing vessels and various makeshift boats, dozens of community members helped each other to clean out street-level homes and salvage items from homes and shops. Walking was restricted to narrow stretches of mud and sand along the flooded roads.

As day faded to night, daily clean-up efforts were replaced by the noise of multiple generators on nearly every block, due to scare electricity and temperatures that hovered around 5 degrees Celsius.

Al Najd Development Forum, a Mennonite Central Committee (MCC) partner, responded quickly to the need by providing clothes and food rations. MCC now is funding continued distribution of these items as well as household and kitchen supplies to 100 families in various locations in Gaza, including eastern Gaza City. An MCC team was in Gaza on Dec. 18 to assess the situation.

In the broader Gaza Strip, the flooding forced 40,000 residents to flee their homes, and 100,000 people have lost production of their agricultural land. Most people sought shelter with family or in public buildings such as schools.

The United Nations declared Gaza “a disaster area” on Dec. 14.

Khalid Abu Sharekh, chair of Al Najd, said the flooding was disastrous in and of itself, but its effect was much worse because Gazans were already in survival mode because of the Israeli occupation.

“The occupation has meant a lack of income for people, and that makes this natural disaster a catastrophe,” he said, referring to Israel’s control of supplies and people in and out of Gaza.

Even before the flooding, unemployment, poor healthcare, lack of education and stressed agriculture were major issues in Gaza, said Dan Bergen, MCC representative in Palestine and Israel.

Gaza’s 1.8 million people have endured daily 12-hour blackouts since the lone power plant was switched off last November due to a fuel shortage. Israel limits fuels and other supplies that get into Gaza, and within the past year Egypt has closed tunnels that for many years were used to bring fuel and supplies into Gaza and to send exports out.

On Dec. 13, Israel opened a crossing with Gaza, allowing fuel supplies and four water pumps to enter to help relieve the effects of the flooding. However, many Gazans, including MCC partners, maintain that Israel worsened the flooding by opening dams east of Gaza.

Since then, power has been going on and off in eight-hour increments, instead of every 12 hours, due to fuel donations from the Qatar government. Nevertheless, Gaza is mostly dark after sunset at around 5 p.m.

Sheldon C. Good is a freelance writer from Washington, D.C.

‘The occupation has meant a lack of income for people, and that makes this natural disaster a catastrophe,’ says Khalid Abu Sharekh, chair of Al Najd, a Mennonite Central Committee partner, of the flooding in Gaza shortly before Christmas.