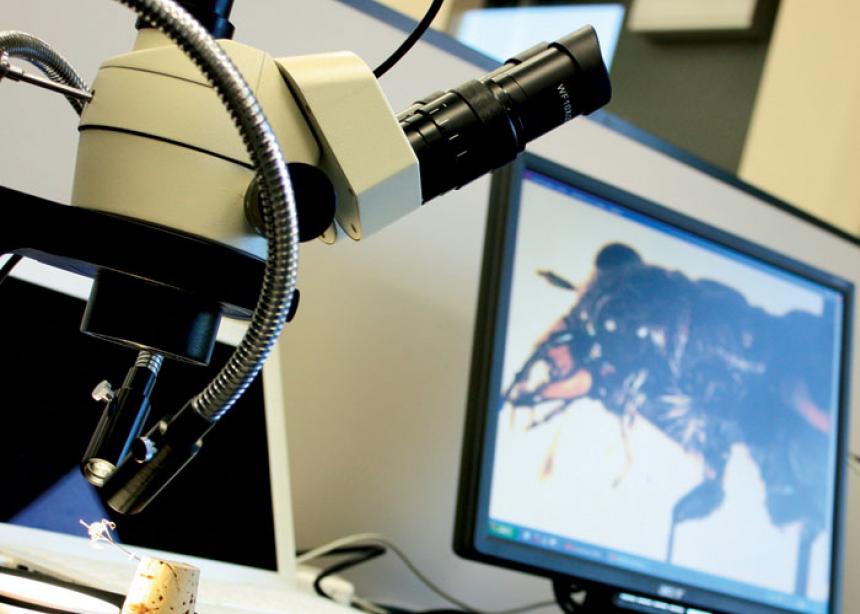 One of CMU’s new dissecting microscopes provides students with a close-up view of a tiger beetle on the screen.

Canadian Mennonite University (CMU) students wanting to pursue a career in the field of science are one step closer to that goal thanks to a brand new, fully equipped science lab that was recently unveiled.

The federal and Manitoba governments funded the construction of the lab on CMU’s south campus as a part of their Knowledge Infrastructure Program, with Canada providing $301,500 and the province giving $150,800. The initiative aims to support infrastructure enhancement at universities and colleges across the country to provide better educational experiences for students. This can certainly be said for current and prospective CMU students who are now able to use the new lab to build a strong foundation for their future professional studies.

CMU’s previous science lab was quite small, only able to accommodate approximately 15 students. It did not have gas or distilled water on tap—substances necessary for many experiments—nor did it have many of the newer tools students would normally expect to find in a university science lab, said John Brubacher, an assistant biology professor.

The new facility includes a 111-square-metre teaching laboratory, a preparatory lab and a large storage facility, complete with more safety features, gas and distilled water on tap, and many other modern scientific tools, Brubacher said.

The curriculum of the new science courses at CMU will be fresh and new, Brubacher said. Students will be able to take classes in organic chemistry, biochemistry, genetics, cell biology, physics and microbiology, building an academic base in the sciences within a Christian liberal-arts environment, as a precursor to professional studies in nursing, agriculture, medicine, pharmacy, engineering and education.

“Students seeking a future in science will have a strong foundation to begin that journey,” CMU president Gerald Gerbrandt said at the unveiling of the new science lab on Sept. 3.

CMU used the occasion to thank the federal and provincial governments for their funding, and for the many private donations totalling $350,000. The event was attended by Premier Greg Selinger and federal MP Steven Fletcher, the minister of democratic reform.

According to Fletcher, this investment in infrastructure at CMU is an investment in the knowledge economy of Canada. “It will strengthen Canada’s position as a world leader in science and technology,” he is quoted as saying in a provincial government press release. 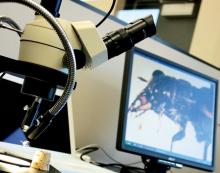 One of CMU’s new dissecting microscopes provides students with a close-up view of a tiger beetle on the screen.