‘From farm to fork’ 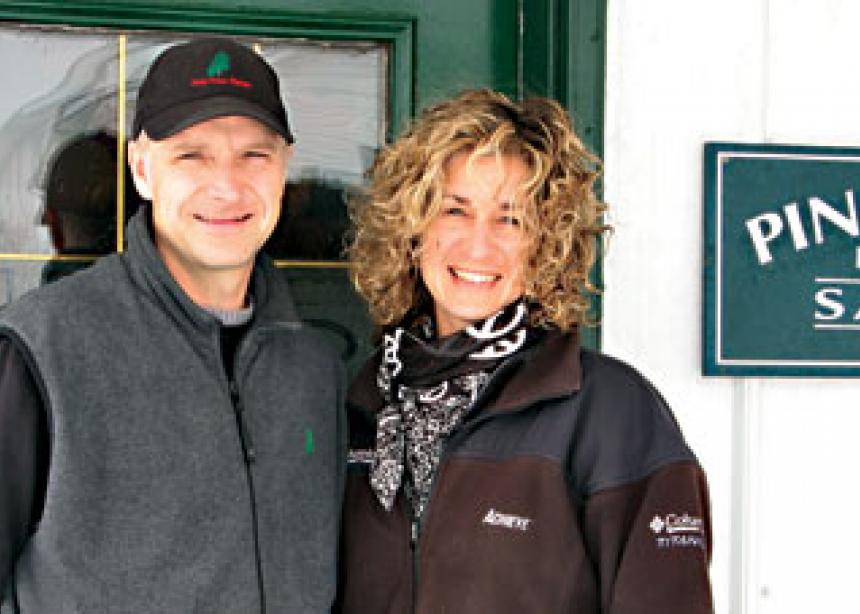 So many people spend their time and energy accumulating things, but what they really want are simpler lives and deeper connections with others. Knowing that reconnecting with friends and family always involves food, the owners of Pine View Farms All Natural Meats near Osler offer grain-fed, hormone-free food products to those living in their small corner of the world.

Co-owners Kevin and Melanie Boldt have come a long way in the past 12 years, when they set out with the goal of staying financially afloat on their own terms. This meant making the farm viable without resorting to one or both of them supplementing their incomes with off-farm work. It hasn’t been easy.

“In the first six years of farming, we had one bumper crop, one average crop and four years of drought,” says Melanie, adding, “So many things are out of your control as a food producer; you’re at the mercy of global markets, supply and demand.”

Rather than be victims of what they see as a faulty system, the Boldts decided to forge a new path. But becoming pioneers in a farm-gate operation—in which farmers sell their produce directly to consumers from their farm—was a new and untested area then.

“In the beginning, we were just doing what we thought was right . . . what aligns us with our values and beliefs,” Melanie explains.

“Now it’s more of a conscious effort, a philosophy of how we do things,” Kevin, the quieter one of the two, adds.

People didn’t always understand the couple’s decision to try a new path. But attitudes have changed, she admits, and there is now more interest in their products and the way they market them.

“[The trend of] buying local has really increased the profile of what we do,” Melanie says.

The Boldts’ faith plays a big part in how they approach the business, and many of their ideas have come through concepts encountered in their church, Osler Mennonite. Teaching on creation care and farming conferences, such as “Making peace with the land,” have also helped shape their philosophy.

Concern for others has given them a desire to pay other producers a fair wage, bringing production costs and profit margins into account.

“We’re not going to make a profit on the backs of other people,” Melanie stresses. Although she wasn’t raised on a farm, she came into the marriage with a commerce degree and has helped to shape the direction of Pine View Farms.

Concern for what goes on people’s plates prompted the couple to raise their animals in the healthiest way possible. Their animals are fed grain and raised without the aid of growth hormones or animal products. They choose to purchase soybean meal from local farms, rather than trucking in organic soybean meal from 2,400 kilometres away, which means Pine View cannot market its meat using the “organic” label. But that doesn’t matter to them.

“We focus on regional and local markets, rather than a certain tag,” Kevin says. The “certified organic” label is important if the farmer is shipping products across the country, he explains, saying that in such cases consumers naturally look for a governing body to vouch for the producer’s claims.

“We are in a local market,” he says. “Our third-party verification [is] our customers.”

Concern for others has also led the farm family to focus on educating the public about what lies behind the production of food.

“People don’t think about what’s behind the food they buy,” notes Melanie. “Our business is about staying close to the customer, but also creating that connection so that people know where their food is coming from.”

The public is invited to drive out to the farm to see how the animals are raised, and to purchase meat that is for sale right on the premises. But as keen observers of market trends, the Boldts see that many people are time-strapped but cash-rich, and are looking for quick, easy solutions to meal preparation. Busy lives also mean customers are less willing to drive out to the farm to purchase the meat.

Enter Souleio Foods Inc., their newest venture in downtown Saskatoon. According to its website (souleio.com), “Souleio Foods was spawned in 2004 [when] Remi and Janis Cousyn, owners of Calories Bakery and Restaurant, with friends Kevin and Melanie Boldt, owners of Pine View Farms All Natural Meats, discussed the idea of joining forces to create an urban food market offering artisanal, sustainably produced foods both from local sources and around the world. Combining the culinary skills of Calories with the agricultural roots of Pine View Farms, this new business would be truly ‘farm to fork.’”

“Souleio gives us access to a market we can’t reach out here” on the farm, says Melanie happily.