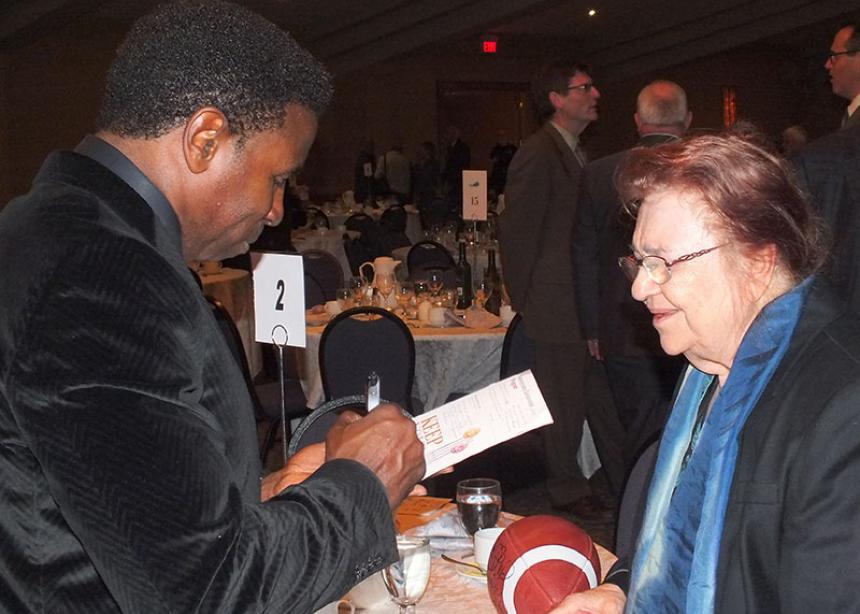 Although Michael "Pinball" Clemons is famous for his exploits in the Canadian Football League, he talked about the importance of humility and living for others when he spoke at an anniversary gala held at Bingemans banquet hall in Kitchener, Ont., on Nov. 4. Hundreds of guests celebrated 70 years of Fairview Mennonite Home in Cambridge and 50 years of Parkwood Mennonite Home in Waterloo, also raising money for Fairview's kitchen expansion and enjoying Clemons's great smile and inspiring stories.

It didn't take long for the former Toronto Argonauts running back and coach to make an impression. During the after-dinner auction, he bought the first item, a signed Kitchener Rangers hockey jersey. The second item for sale was a football jersey signed by Clemons. Just before the bidding started, he got up from his seat and said the item should also include two tickets to the CFL's Eastern Conference final game.

The bidding rose quickly, then slowed at around $1,100. Clemons again approached the auctioneer and said, "We can arrange a pre-game visit at the sidelines. " Grinning broadly, he added, "That should be worth another $100! " The bidding quickly took off again until it stalled at $1,600. At that point, Clemons announced that he could get another jersey, and another set of tickets and passes for a pre-game visit, and both buyers were able to make a $1,600 contribution.

These antics served to warm up the crowd. No one doubted his warmth when he responded to David Jutzi's introduction by saying, "That was one of the best introductions I've ever had; I need to love you. " With that, he walked over to Jutzi and gave him a big hug.

Clemons is a most unusual speaker. Using a wireless mic, he never went behind the podium, but wandered among the tables, sometimes interacting with the guests and sometimes jumping up on a chair.

"Yes I ran for 25,000 yards, " he said, but quickly added, "All that means is that I was a glorified coward. " He declared that Canadian society chases after the illusions of fame and style when it should be concerned about substance.

"The Hall of Fame is for artefacts, " he remarked. "All I did was run with a piece of leather for a few miles—and it took me a few years! " Fame is not what is important, he insisted. Being a good father and a good husband is much more important.

Taking care of other people and putting their interests above a person's own are important goals in life, declared Clemons. What matters in life is service, such as that found in homes that care for elderly parents, he said, referring to the reason for the gala.

Clemons talked about the fullbacks who ran in front of him. "Eleven guys sacrificed their bodies so I could get the yards, " he said humbly, suggesting that when the elderly can no longer run by themselves, the next generation needs to run with them.

The anniversary gala was a great success. The fundraising dinner, auction and donations raised $90,000. 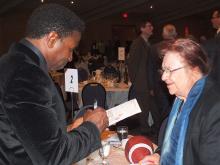