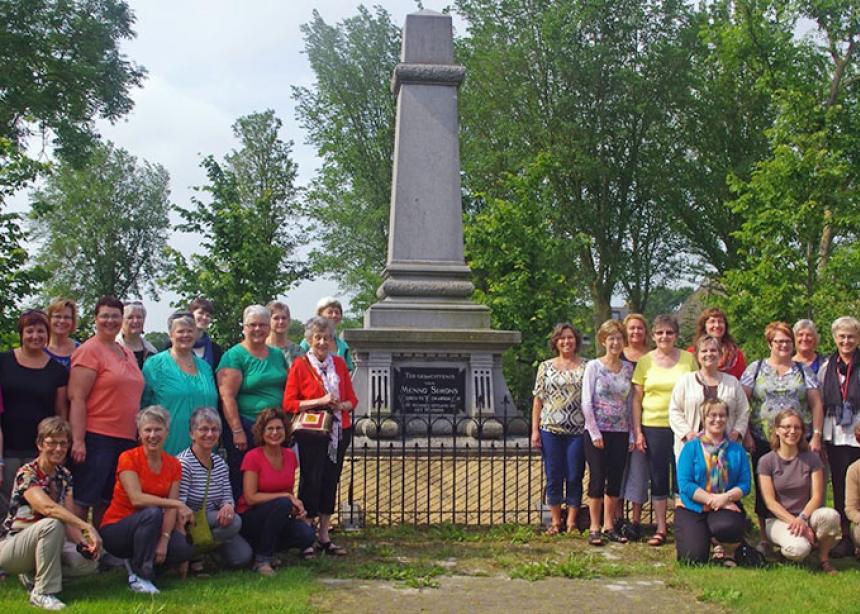 An idea that began in a chat on the way to choir practice became a dream come true for members of Manitoba’s Faith and Life Women’s Chorus.

For two weeks in early July, 26 choir members gave a series of concerts as they toured European churches, castles, countrysides and Mennonite heritage sites, all while meeting their Mennonite counterparts in the Netherlands, Germany and France. Everywhere they went, the warmth and hospitality with which they were received was overwhelming.

Ruth Derksen, a choir member, recalled the welcome they received at the Doopsgezinde Gemeente (Mennonite Church) in Sneek, the Netherlands, where they performed their first concert. “People were standing outside the church, waiting and waving with open arms as they saw our bus approach,” she said. “That hospitality was extended to us everywhere we went. And after the service, they were effusive with their thanks.”

The choir, conducted by Millie Hildebrand and accompanied by Leanne Regehr Lee, gave eight concerts in mostly Anabaptist churches on their tour. Three were part of worship services and five were evening concerts during which they were able to offer a fuller repertoire.

As they travelled and toured other churches and cathedrals, the choir also offered brief impromptu concerts.

“The Strasbourg Cathedral was one of the places we were able to secure some singing time and so we did a short 10-minute mini-concert during our tour,” Derksen recounted. “At a former monastery in the Black Forest, we managed to secure 10 minutes sandwiched between a wedding and an organ rehearsal to sing and people in the area would begin to gather. It was truly remarkable.

“People would weep openly when they would hear us sing ‘Gott ist die Liebe’ or the ‘Rheinberger Abend Lied,’ which was arranged for us in six parts,” she said. “Often, when we would sing, we heard comments about how meaningful the songs were, and they would invite us to sing more. We often make music for ourselves, but the emotion the music drew from others was surprising and touching.”

Some of the members chose to stay in hotels, but most were billeted in homes.

“Staying with host families has been an interesting experience . . . farm smells, roosters crowing and visiting with the aging aunt of our hostess in Plaut Dietsch,” were among the memories choir member Irene Schellenberg shared in a blog she kept throughout the tour. “We have had warm fellowship and gained a sense of family with those who have welcomed us.”

The women’s chorus is a branch of Mennonite Church Manitoba’s community-building ministry and is dedicated to the mission of inspiring others to worship God through music. In the nearly two decades that the choir has existed, it has sung at various Mennonite church assemblies and congregations, and in seasonal concerts and songfests. It provides music for the Frohe Botschaft radio program and has recorded several CDs. But this was its first tour overseas.

“Since we have been home,” said Derksen, “we have appreciated how friendships within the choir have been formed and strengthened. . . . Even those who were reluctant to go initially are so glad that they did.”