Plaquemines Parish fishers out of work, hope to be hired for clean-up by BP 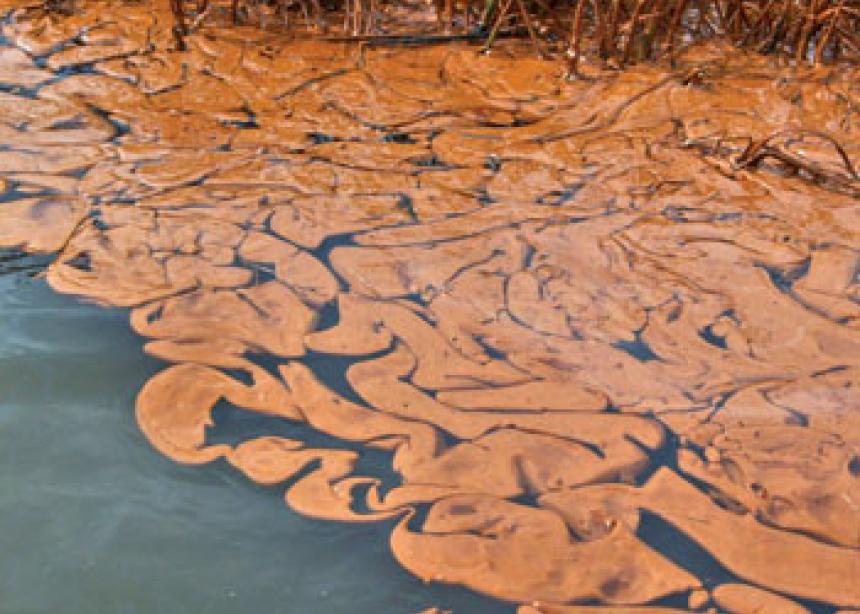 Maurice Phillips, a commercial fisher of Plaquemines Parish, La., took a group of disaster management leaders out on a small boat to “see the oil” on June 7. This is the best way to witness the destruction of the British Petroleum (BP) oil spill, members of Grand Bayou told Paul Unruh of Mennonite Disaster Service (MDS). Unruh led the group as part of a listening tour.

After a 30-minute boat ride from homes built by MDS on Grand Bayou, the group came to where shiny brown oil covers the banks of the marsh and Bay Baptiste. The Gulf of Mexico surrounds Plaquemines Parish and the Mississippi River runs through it.

At places, the group detected the oil’s odour, and they could make out a sheen on the water as well as orange residue on the top of the metre-deep water.

Booms set up along portions of the bank absorbed some of the oil. But according to Phillips, this action came too late to prevent the oil from devastating the seafood industry and the livelihood of individuals in the parish. Just five years ago these same families lost their homes because of Hurricane Katrina.

Since the spill on April 20, the U.S. Environmental Protection Agency gradually closed the waters for fishing and shrimping, and now almost all waters are closed to fishers.

“Usually this time of the year,” Phillips said, “there would be a hundred shrimping boats out.”

That morning, the boat for the listening tour was the only one.

The previous night, at Paul Sylve’s home on Grand Bayou, Phillips described a pelican he found covered in oil—as thick as syrup—in the water. He took the bird aboard his boat and delivered it to the pelican rescue facility at Fort Jackson, La.

Sylve, a fisher and assistant pastor, said a friend of his went outside federal waters—that are unsprayed by dispersants—put his arm in the water and into a half-metre of oil that felt like jelly.

Phillips said the dispersants used by BP only “[sink] the oil,” and it still damages the marsh and wildlife.

As of June 7, the homes on Grand Bayou remained unaffected by the oil.

“When you have wind and high tides, banks will be covered,” Phillips said. “I think they should have more people picking up the oil.”

According to Phillips and other fishers, BP has no shortage of people who know the waters and are willing to do the work.

James Trabeau, a fisher, finished eight hours of training with BP and is ready at any time, but he has yet to receive a call. “I’m just sitting and waiting until my turn,” he said. “I really need to work bad.”

Trabeau did receive a $5,000 cheque for his losses for the month from BP. But that amount falls dramatically short of what he usually makes during a month of shrimping season—five or six times that amount.

Thuong Nguyen, who has fished the waters for 20 years, was also waiting for a call from BP on June 7. While the money may not be as good as shrimping, he said BP pays $2,000 a day to a large boat captain like himself. Smaller boats were able to shrimp closer to the shore, where the oil has yet to reach. His larger boat must go out farther, and those waters are restricted. On June 8, Nguyen received a call from BP. He was to start his first day of clean-up on June 14.

The listening tour group also met with 11 pastors from the area who described their concerns with the spill as well as expressed their faith in God.

Reverend Ted Turner from a church in Boothville, La., said many young people in Grand Bayou and Venice, La., learned to fish from their parents, who learned from their parents and on back. “This is all we’ve ever done and we don’t want to do anything else,” he said. The last thing these families want—post-Katrina—is to have to leave the parish, find a new job and a new way of life that does not let them eat much of what they catch.

Sylve’s wife, Carolyn, said she buys few groceries because they eat so much of what they fish. “We live off the land,” she said the night before the tour in her home built by MDS. Referring to the 1989 Exxon Valdez oil spill, she said, “In Alaska, people committed suicide, families broke up. . . . Where does that leave the children?”

The Sylves’ 11-year-old daughter, Jeanne, said she will cry if she goes out to see the oil in the marsh. “This bayou is a great place, and God created it for us,” she said with tears. “Hopefully, they’ll find a way to stop this oil.”

Another member of the Grand Bayou community, Rosina Philippe, described the spill as a “product of greed.” “This is something we haven’t faced before,” she said. “It’s a new enemy.”

The group also visited the Plaquemines Parish government office. Benny Puckett, grant administrator for the parish and chair of the Committee of Plaquemines Recovery, told the group that what is sadder than the waters closed to fishing is the threatened reputation of seafood from Louisiana. “Overcoming that will probably be a more difficult task,” he said.

He also described what he calls “human collateral damage.” For example, the deck hands paid under the table who cannot prove to BP that they have a legitimate claim since they lack the required documentation. “They’re not able to show they’re impacted,” he said.

This may offer the place for faith-based organizations to step in, Puckett said, as opposed to volunteering on site: “We appreciate [volunteers’] passion and desire, but we have people that are unemployed that we want to keep employed as long as possible. . . . Let’s find something else.”

Later on June 7, Unruh and Jerry Klassen of MDS provided a collaborative statement regarding a possible MDS response to the spill: “Because of the ongoing, unfinished disaster that’s unfolding and the need for support in the community, our best channel may be to return to our building program, let our hammers ring hope while we continue to listen to other opportunities to respond.”

Klassen said the fact that the oil continues to leak into the gulf also affects the timing of a response. “This is the longest ongoing disaster I’ve ever worked on,” he said. 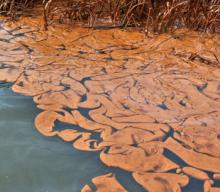