An ‘experiment’ in sexuality gone wrong 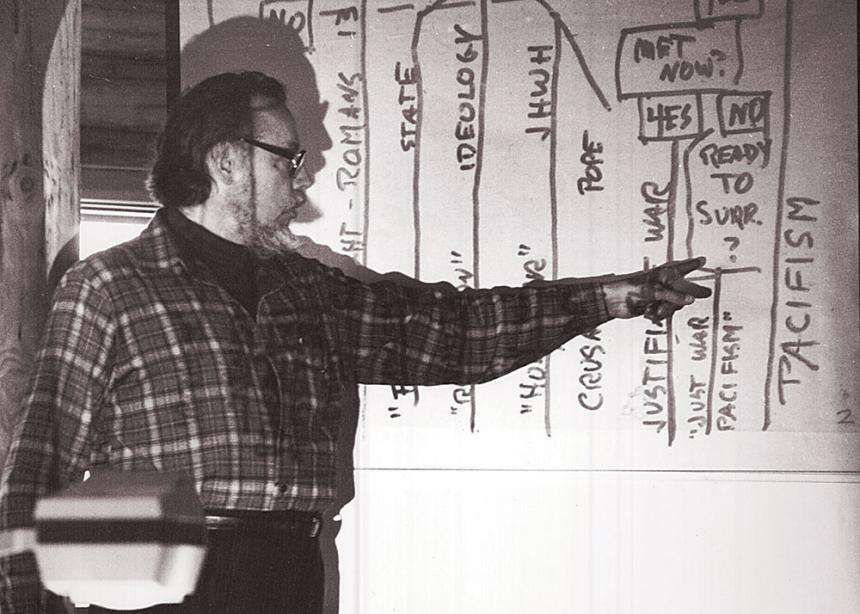 The following is excerpted from a longer article, “ ‘Defanging the beast’: Mennonite responses to John Howard Yoder’s sexual abuse,” in Mennonite Quarterly Review No. 89 (January 2015), based on newly available documents and interviews with 29 individuals. Readers interested in Goossen’s work in its entirety, including documentation for women’s accounts of their experiences as well as Mennonite institutional responses, may order a hard copy of the issue from MQR. The MQR issue is also available as an e-book through MennoMedia.org.

During the mid-1970s, the renowned Christian ethicist and theologian John Howard Yoder embarked on an experiment in sexuality, devising his own guidelines and selecting his own subjects, whom he called “sisters.”

Following a three-year term as president of Goshen (Ind.) Biblical Seminary, he began to develop “the notion of a distinction between two dimensions of sexuality, the familiar and the genital.” Yoder speculated that persons plagued either by inhibitions about sexual intercourse or by promiscuity would have difficulty attaining what he termed “the freedom of the gospel,” which he linked to Jesus’ encounters with women. In a series of essays that he circulated on the seminary campus and beyond, Yoder speculated about Jesus’ sexuality as a model for his disciples, for the men who followed in his path.

Nearly two decades later, in 1992, a denominational task force established by leaders in Yoder’s congregation, Prairie Street Mennonite Church, Elkhart, Ind., confronted him with 13 charges of sexual abuse. “These charges indicate a long pattern of inappropriate sexual behaviour between you and a number of women,” the task force told Yoder, who had been ordained while serving as the seminary’s president. “The settings for this conduct were in many places: conferences, classrooms, retreats, homes, apartments, offices, parking lots. We believe the stories we have heard, and recognize that they represent deep pain for the women. . . . The stories represent . . . a violation of the trust placed in you as a church leader.”

In response to the task force’s recommendations, the Indiana-Michigan Mennonite Conference suspended Yoder’s ministerial credentials and urged him to enter counselling and make restitution to women he had harmed. Yoder, who never disputed the 13 charges of sexual misconduct, agreed to take part in the disciplinary process, but maintained that he had never intended harm. Yoder phrased his misreading of women’s willingness to give consent as “falling off the bike”—that is, something that was regrettable but unintentional.

In the mid-’70s, when Yoder’s patterns of abuse emerged, he lived in Elkhart and was a professor of theology at the University of Notre Dame and taught part-time at Goshen Biblical Seminary, which shared facilities with Mennonite Biblical Seminary, now known as Anabaptist Mennonite Biblical Seminary (AMBS). A prodigious scholar, Yoder lectured widely across Europe, North America, Africa, Asia and Latin America. His 1972 book, The Politics of Jesus, was considered a classic on religious pacifism, and his influence across international academic circles was immense.

During the last 25 years of Yoder’s life, his sexual behaviours toward many women caused significant harm. A highly mobile professor and church leader, he approached mostly Mennonite women both near and far from home. Yoder’s advances included making suggestive comments, sending sexually explicit correspondence and surprising women with physical coercion. In a 1974 solicitation in which he appealed to women to engage with him, Yoder wrote: “Only thanks to your friendship, sisterhood, can I do the theology.” Remarkably, he was conveying that they were tools for him to use in his quest to perfect Christian theology.

Precise numbers will never be known, but two mental health professionals who worked closely with him from 1992-95 as part of the Indiana-Michigan conference’s disciplinary process believe that more than 100 women experienced unwanted sexual violations by Yoder, ranging across a spectrum from sexual harassment in public places to, more rarely, sexual intercourse. With no legal charges ever filed, adjudication took place in seminary offices, conference quarters and living rooms—often involving Mennonites connected to Yoder through congregational associations or even family relationships. Despite Mennonites’ emphasis on local authority, rather than entrenched hierarchies, these leaders’ interventions, while well-intentioned, were largely ineffectual.

By 1979, Yoder’s supervisor at the seminary, president Marlin Miller, was documenting a surge of disturbing incidents involving Yoder from as far away as South Africa and from Strasbourg, France, headquarters of Mennonite World Conference. At the time, U.S. courts had not yet consistently defined sexual harassment, and employers rarely called in law enforcement to respond to sexual misconduct.

Rather than firing Yoder, who was his intellectual mentor as well as predecessor in the seminary presidency, Miller kept meticulous records about what he learned. He summarized calls and letters received—mostly from English-speakers, but also some in German and French—about women’s encounters with Yoder. Miller’s diary-like entries included details about his informants’ marital status and whether they had reported “total disrobing,” as well as their rationales for engaging with Yoder in his project. Miller also kept notes about women who reported that they had rebuffed Yoder’s sexual aggressions.

Although Yoder and Miller, hoping to avoid potential for scandal or blackmail, destroyed an unknown number of letters in 1980, surviving documents reveal not only the egregious behaviour of Yoder toward some women, but also the power that Miller used to enforce their silence. For eight years, 1976-84, engaging with Yoder via theological disputation became the hidden agenda of Miller’s presidency. Hoping to save Yoder’s marriage and career, he used the data he had gathered to repudiate his star faculty member’s notions about sexuality.

In 1980, Miller established a disciplinary process with a small group at Goshen Biblical Seminary in an unsuccessful attempt to bring Yoder to accountability. This collection of faculty and board members, who drew up a secret “cove-nant” with Yoder, was the first of seven Mennonite groups to challenge Yoder from within institutional bases:

These groups had varying goals: to engage Yoder intellectually in his unconventional notions about sexuality; to investigate rumours of sexual misdeeds; to arrange for meetings between women accusers and Yoder as a step towards forgiveness; and to discipline him. No group succeeded completely. For the last two decades of his life, Yoder discussed, sparred and negotiated with these various parties.

In 1984, Miller and members of the Covenant Group, having failed to stop Yoder’s behaviours, recommended his departure to the seminaries’ boards. Yoder was allowed to resign, and he informed the theology department at the University of Notre Dame that he was leaving his adjunct position at Goshen Biblical Seminary, adding that the decision had “delicate dimensions.” For the coming decade, seminary insiders maintained confidentiality, and Yoder, whose profile as theologian and ethicist would grow with his base at Notre Dame, was no longer welcome at AMBS events.

Yoder’s professional reputation suffered only marginally. He was never formally disciplined by his broader academic and religious peers with whom he was affiliated, including the Society of Christian Ethics, which he served as president from 1987-88. Yet through the remainder of the ’80s and into the ’90s, the secrecy that had veiled Yoder’s actions began to collapse. Some women who had experienced Yoder’s sexual aggressiveness leveraged their collective will to force Mennonite leaders to stop his abuse. Their efforts at whistle-blowing culminated with several dramatic events in 1992, a turning point in the denomination’s dealings with Yoder.

Over the next several years, Yoder sharply contested Mennonite conference officials’ right to retain records documenting his abuse. In 1996, concerned about the implications of the sexual abuse charges on his legacy, he informed Indiana-Michigan Mennonite officials that he was consulting a lawyer about the conference’s plan to retain hundreds of documents—correspondence, meeting minutes and mental health records—that they had used in deciding not to reinstate his credentials. Yoder’s dispute with Indiana-Michigan Mennonite officials signalled that their four-year discipli-nary proceedings would miss the mark of reconciliation. A year before his death in 1997, at age 70, Yoder declared that “the initially stated goal of restoration has been abandoned.”

Since Yoder’s death, more than a decade-and-a-half ago, some admirers of his theology have offered various explanations for his behaviour. But in keeping the focus on Yoder, rather than on the consequences of his actions, these speculations deflect attention away from institutional complicity. Yoder had lectured extensively about the mandate of Matthew 18:15 for individual responsibility in confronting wrongdoing, and Miller, along with an entire generation of ordained leaders, had imbibed lessons on church discipline—in the biblical phrase, “binding and loosing”—from Yoder through his widely disseminated books and teaching.

Tragically, in seeking to apply the Matthew 18 mandate for resolving conflict, Miller and others in positions of authority responded with painstaking slowness to Yoder’s abuse of power. Years of wasted time, energy and denominational resources enabled the victimization of women living and studying on the seminary campus and beyond.

The peace theologian’s perpetration of sexual violence upon women had far-reaching consequences among families, within congregations and throughout church agencies, from AMBS and Mennonite Central Committee to mission programs and Mennonite-affiliated institutions across the globe.

And the reverberations continue today for anyone seeking to read Yoder as a credible theologian.

With aching hearts (a statement by Canadian Mennonite) 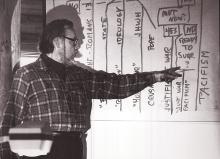 The Anabaptist perspective on non-violence is well-known. But at least one commentator, John Longhurst, in his recent article about the Yoder affair that appeared in the Winnipeg Free Press, touched on the great dissonance between the principles of non-violence championed even by Yoder himself, and what has been perpetrated on all those women he violated.

Perhaps it is worth considering the words of David, the king whom God refused the honour of building His temple because he was a man of war who had shed much blood on the earth:
Too long has my soul had its
dwelling with those who hate peace.
I am for peace, but when I speak,
they are for war. Ps.120:6-7
There are men of war who have hearts for peace, and there men who profess peace, but violence is in their hearts.