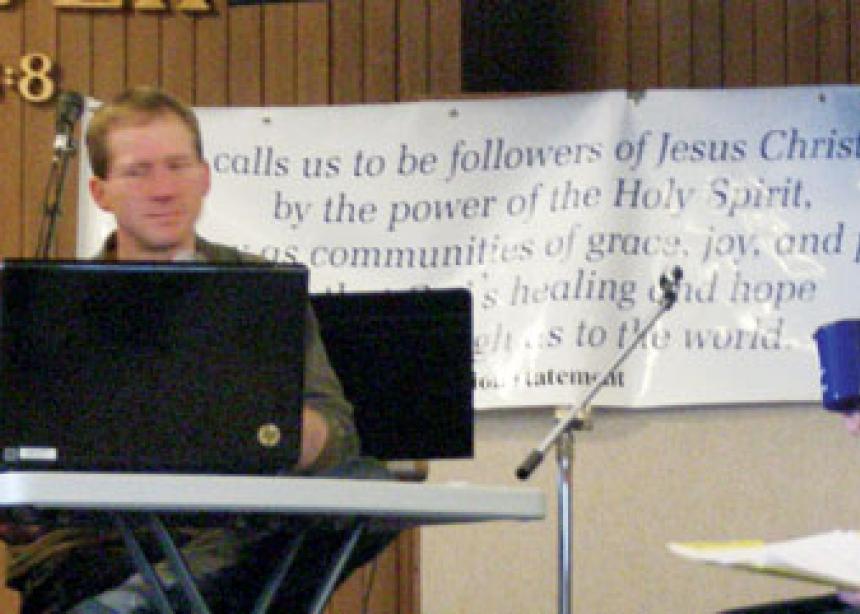 Reports on a new church plant model and passion for native ministries highlighted the annual delegate sessions of Mennonite Church B.C., held at Living Hope Christian Fellowship, Surrey, on Feb. 26. Delegates followed “Being a Peace Church” as a theme, carried out through both business and workshop sessions.

Steve Heinrichs, who has been doing a research project on urban aboriginal assessment in conjunction with MC Canada and Mennonite Central Committee B.C., gave an impassioned speech on how Mennonites can connect with First Nations people in creative ways.

“What can I as a white person do to help indigenous persons?” he challenged the delegates to consider. “We must recognize that problems exist not only within the Indian community ‘over there,’ but within the white community as well. The main goal of this project is to connect these two communities in creative ways. . . . It is my conviction that to live faithful lives as peacemakers in this place, then we’ve got to know the natives. It’s a calling we need to make time for,” he said.

The Service, Peace and Justice Committee presented a proposal that MC B.C. financially and structurally support a half-time staff person to continue the Aboriginal and Mennonite Ministry Project from April 2011 to April 2012. A motion to support the idea in principle was passed; the leadership board is to pursue this proposal in a positive way in the coming year and then communicate back to the congregations to see how it can be supported.

Living Hope, the host church, gave an informative presentation on a new church expansion model it is developing in the Sullivan area of East Surrey. Living Hope is starting a new branch of the same congregation in that area, differing from a traditional church plant in that it is still considered part of Living Hope.

“This is taking part of who we are and planting it in another area,” said Pastor Lorin Bergen. “We are going to them, as opposed to having them come to us.”

The Sullivan group, which currently numbers 26, will soon meet weekly, and in September there are plans to branch out into the community as a whole.

Camp Squeah staff gave updates on the current camp programs, including a new family camp and the launch of a new mentoring and discipleship program, both beginning this summer. It was announced that the camp plans to celebrate its 50th anniversary in two years.

Delegates tackled a potentially difficult topic in considering how to deal with the property of Olivet Church in Abbotsford, which withdrew from MC B.C. three years ago. Discussion as to what to do with the church property, to which MC B.C. holds title, has been ongoing between Olivet’s leadership and the MC B.C. leadership board, and as yet has not been resolved. A diversity of opinions was expressed as to how to proceed, with the general opinion that the leadership board should continue to be in dialogue with Olivet as to the property’s future.

Presentation of the budget took a new turn, when executive minister Garry Janzen tried something different in giving a “narrative presentation” of MC B.C. finances. In the absence of a treasurer, Janzen informed delegates in anecdotal form where the area church money was going, rather than just having figures presented.

“It was a serious attempt to make the budget presentation missional, as well as more meaningful. It was also the first time for me, someone who is really not a financial thinker, to present and field questions on a budget,” he commented later.

Next year’s sessions in Abbotsford will celebrate the 75th anniversary of MC B.C. Guest speaker will be Stuart Murray, author of The Naked Anabaptist. A committee has been formed to update the history of MC B.C. in the next year and make it accessible to all.