From ‘exhortation to incarnation’ in witness 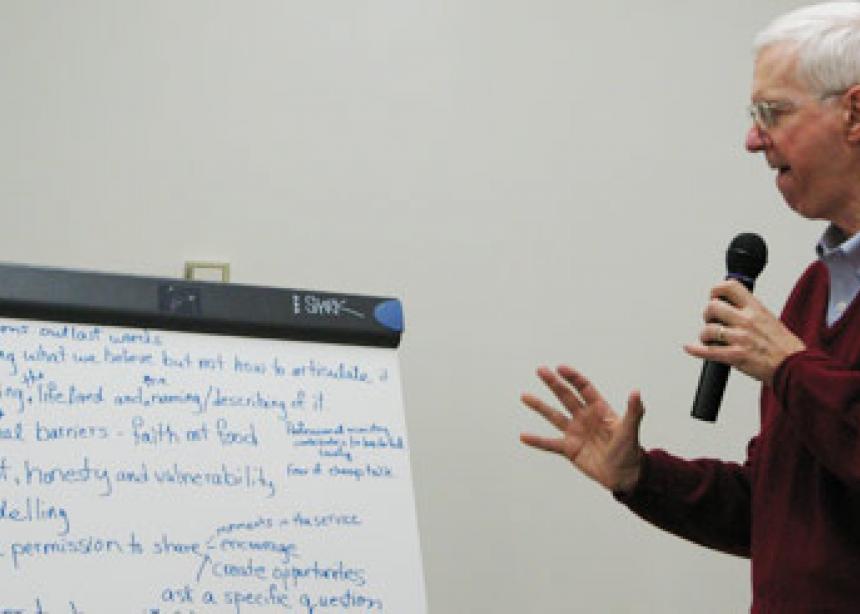 Kreider, a retired professor of church history and mission at Associated Mennonite Biblical Seminary with 26 years of experience as a missionary in the United Kingdom, Europe and South Korea, was the keynote resource person for the two-day gathering at the end of February, and met for a conversation with pastors prior to the formal sessions.

The pastors named several obstacles to the ease of witnessing:

• Mennonite culture getting in the way of sharing faith;

• Learning the language of talking with non-churched neighbours; and

• The tendency to focus on deeds rather than words.

“We have a faith, not a food,” said one pastor in voicing the struggle about cultural baggage that gets in the way of sharing what Kreider called Mennonites’ “little stories.”

Having moved from an immigrant culture, where survival consumed both physical and spiritual energies, to one of affluence and assimilation into the larger culture, another observed, “We need help in knowing what is valuable to give witness to.”

Kreider said he is moving away from the word “testimony” to a more usable term he called “reports from the front.” He called for the development of relationships that are authentic, both with fellow church members and with “outsiders.” He identified the need to form a new rationale for what Mennonites do in witness, calling it their “divine imperative.”

Hearing Ryan Siemens, pastor of Grace Mennonite Church in Prince Albert, the host church for the gathering, report a recent survey showing that only 11 percent of the city’s 35,000 residents say they go to church regularly, the group explored new venues of worship than the traditional Sunday morning service.

During Sunday morning worship, another said there needs to be opportunities for congregants to share the important faith moments of their week. He reported having a fitness instructor talk about the five stages of aerobics over a number of Sundays as a way of sharing her faith.

Kreider encouraged such innovations, saying they create a “culture of vulnerability” whereby members can learn a new language of faith. This time of speaking to fellow congregants is also training ground for how to communicate with those outside the faith.

In his public sessions to the delegates, Kreider expanded on new ways to talk with God, to each other and to those outside Mennonite communities of faith, suggesting what he called an “ecosystem” of three life-giving forms:

• Sharing the faith (with each other); and

• Witness (sharing the faith with outsiders).

These three forms are all interdependent, he insisted, none of them working and being effective without the others.

Using the gospel stories of Jesus teaching his disciples to pray the Lord’s Prayer, the centurion coming to Jesus for healing of his servant, and the church praying for Peter and Paul when they were in prison, he demonstrated how the main purpose of the Christian community is to be attuned to how God is bringing about his kingdom, what he called the “big picture.”

“What happens during the week,” Kreider said, “comprises the ‘little stories,’ all pointing to the ‘big story’ of God’s kingdom coming, his reign being established in many different corners of our world.”