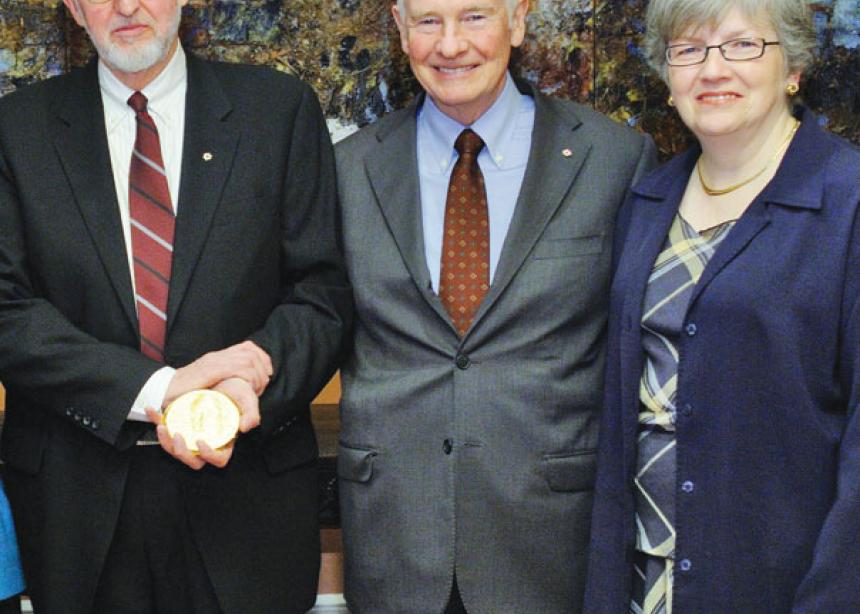 Ernie Regehr, cofounder of Project Ploughshares and longtime peace advocate, was honoured with the 2010 Pearson Peace Medal at a special ceremony in Ottawa last month.

Established by the United Nations Association (UNA) in Canada, the medal annually honours a Canadian who has personally contributed, through working and volunteer commitments, to the causes that the late Lester B. Pearson, prime minister of Canada from 1963-68, worked for during his career: Aid to the developing world; mediation in situations of armed conflict;  aid to refugees and the needy; equal rights and justice for all; and peaceful change through laws and world organization.

As a patron of the UNA-Canada, Governor General David Johnston presented the medal to Regehr, whom he considers a friend, at Rideau Hall on Jan. 21.

Regehr, of Waterloo, Ont., the 26th recipient of this honour, was recognized for his work with Project Ploughshares and his involvement in a number of Government of Canada and United Nations initiatives.

In 1976, he co-founded Project Ploughshares, an ecumenical agency of the Canadian Council of Churches established to implement the churches’ call to be peacemakers and to work for a world in which justice will flourish and peace abound. His wife Nancy initially volunteered in administrative and financial matters before fulfilling the same function as a staffer.

In his speech to the assembled body, Johnston cited Regehr as a “worthy heir to Lester Pearson and the other noteworthy Canadians” who have won the award in the past. Departing from his prepared text, the Governor General reminisced briefly on his years as president of the University of Waterloo, speaking of his friendship with Regehr and his respect for Mennonites and for Conrad Grebel University College, with its emphasis on peace studies.

Nancy Wildgoose, UNA-Canada national president, noted in her introduction that Regehr was a “seasoned and tenacious advocate” for peace, who “represents the best of Canada’s international leadership in peace and disarmament.”

She especially noted the role that he and Project Ploughshares played in mentoring others and in helping youths to understand how they can contribute to issues essential to the future communal peace and security of the world.

Wildgoose also quoted from Regehr’s writing in a Project Ploughshares annual report: “While we measure our work by meetings held, reports written, presentations made and funds raised, in the end it is our impact on the safety and well-being of people that must be the measure of our success.”

Regehr, who adds the Pearson Peace Medal to a list of other prestigious awards that include being made an Officer of the Order of Canada in 2003, noted in his remarks that the award celebrates “a collaborative civil society that works with counterparts around the world to expand and support civic engagement,” but the engagement “is not simply a matter of recasting convictions into lists of non-negotiable demands.”

“To public debate . . . we bring a clear perspective, relevant information and experience, and empathy for the victims of injustice,” he said. “The aim is . . . to help mould the compromises and shape the common ground that produce, not perfect, but more equitable solutions.” 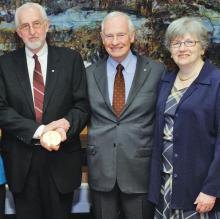 Congratulations to Ernie Regehr! I remember with appreciation, his several visits to Saskatchewan as a resource on peace issues during the 1970's and '80s.