Equipped to listen, but not to agree

November 5, 2014 | God at work in the Church | Number 22
Story and Photo by Donna Schulz | Saskatchewan Correspondent 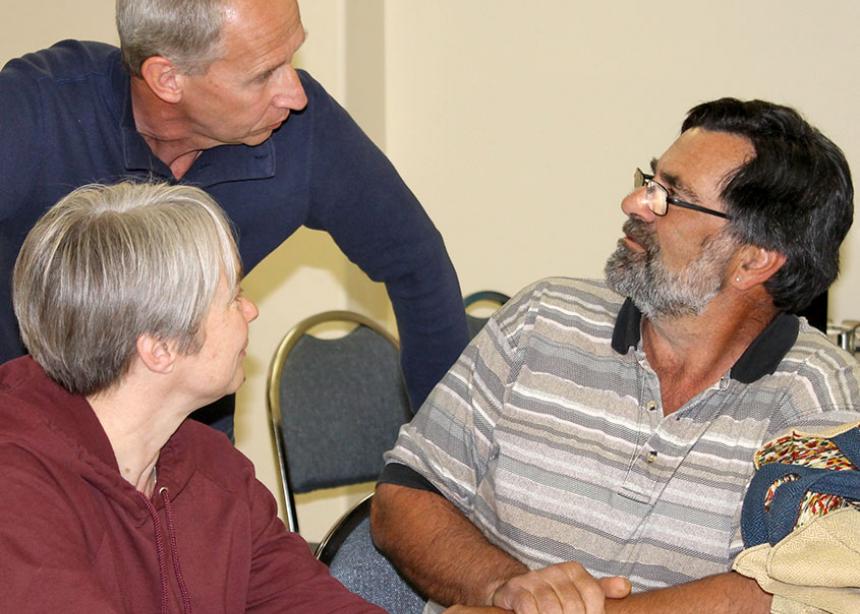 “Jesus, help us live in peace,” people sang at the outset of Mennonite Church Saskatchewan’s “Equipping to listen” event, expressing the sorrow—but also the hope—of a church deeply divided.

The division over homosexuality had been simmering for some time, but came to the fore at the annual delegate session in March. At that time, plans to ratify the Safe Church Policy, which had been in place since 2010, prompted members of Hope Mennonite Fellowship in North Battleford to move that the “Preventing discrimination” section be referred back to the MC Saskatchewan Council to be reworked into a hiring policy to be presented at the annual delegate session in 2015. That motion was defeated, and the Safe Church Policy was ratified as written. Not everyone was comfortable with the process or the outcome.

Knowing this, Council decided to use MC Saskatchewan’s annual Equipping Day as a forum for continued conversation on this contentious issue. About 150 members met at First Mennonite Church in Saskatoon on Oct. 25.

Moderator Gerhard Luitjens limited the morning’s discussion to questions and comments regarding the process by which the policy was ratified in March. The afternoon sessions allowed for more open discussion of the broader issue.

Council member Len Andres explained that the policy was commissioned in response to the steeply rising cost of liability insurance faced by the area church’s three camps.

Orlando Bueckert of Eyebrow Mennonite Church questioned whether the church should let the dictates of insurance companies determine church policies.

Jim Bergen of Waldheim also expressed disappointment that the outcome of the March meeting had been “orchestrated to change the church,” and that due process had been bypassed in an effort to ratify the policy. “Unity is more important than endless discussions that create a dysfunctional body,” said Bergen, who decided to leave MC Saskatchewan as a result.

Many of the thoughts shared centred on what is sinful and what isn’t.

Ruby Harder of Hope Mennonite voiced her view that the church has reached a breaking point over “whether the practice of homosexuality is considered a sin.” Harder went on to say, “We all have sinned. Christ died for all of us.”

Chad Doell of Hoffnungsfelder Mennonite in Glenbush said, “Nothing is beyond God’s reach if we have willingness to humble ourselves.” He also said, “Our flesh is our nature, but we can overcome the flesh.”

Henry Patkau of First Mennonite in Saskatoon concurred, saying, “We need to come to the place where we say, not everything goes.”

Others had difficulty accepting these viewpoints. Ray Friesen of Emmaus Mennonite in Wymark expressed discouragement, saying, “You give the impression that your version of faith is better than mine.”

Matthew Wiens of Nutana Park Mennonite in Saskatoon took exception to Patkau’s suggestion that accepting those with same-sex orientation would necessitate accepting immoral behaviour. “As a gay Christian, I am not abandoning my moral integrity,” Wiens said.

Although the temptation to split over this issue was present, Ryan Siemens of Grace Mennonite Church in Prince Albert said, “Christ has destroyed the dividing wall between us [and we need to] resist the worldly temptation to go our separate ways.”

Gary Peters of Hanley Mennonite agreed with this view. “When you keep splitting and dividing because you are right and others are wrong, you eventually get to be one and alone,” he said.

Numerous participants urged one another to focus on Christ and work toward unity.

Berny Wiens of Herschel Mennonite said, “The church has had two opinions on this subject for as long as the church has existed. . . . We must resist the temptation to condemn each other.”

As the meeting ended, participants on both sides of the issue did worship together, listening as Larry Epp of Rosthern Mennonite Church read Christ’s words in John 17 and then singing softly, “Jesus, help us live in peace.” 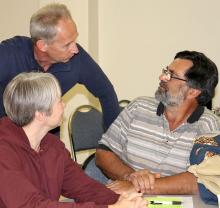