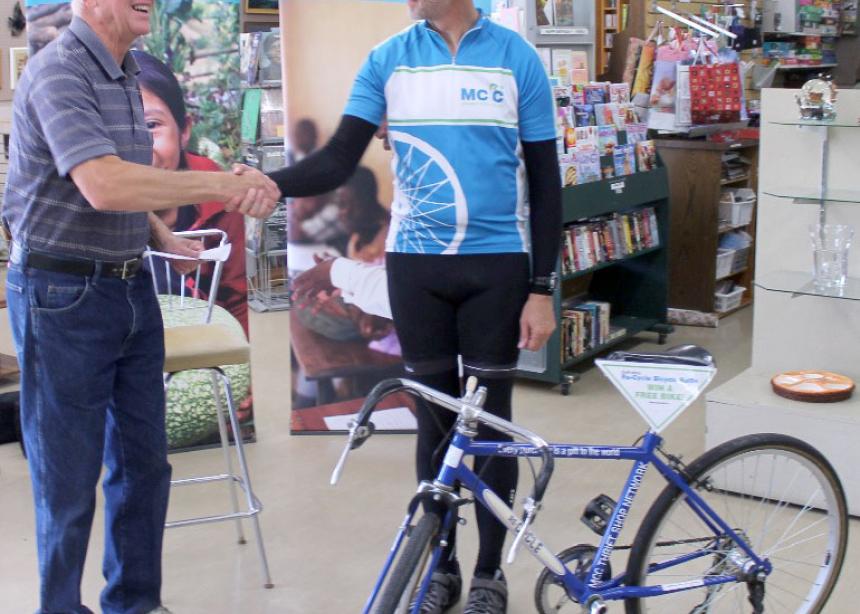 It only took a few seconds for Ron Janzen to catch his breath as he dismounted his bicycle and entered the Carman Mennonite Central Committee (MCC) Thrift Shop to greet volunteers and shoppers.

Janzen, executive director of MCC Manitoba, was on a 600-kilometre bicycle tour of all 16 thrift shops in Manitoba in six days. From Aug. 25 to 30, each shop hosted Janzen for a celebration of MCC’s restorative justice programming in the province. Each shop donated an average of one day’s sales to the cause, with some making substantial donations beyond that.

Several individual and corporate donors are adding their financial support to the cause, including one foundation that has agreed to match donations up to $25,000, said Christina Van Niekerk, community events and engagement coordinator for MCC Manitoba.

Peter Rempel, interim director of Initiatives for Just Communities (IJC) since mid-June, was also at the Carman store to explain some of the restorative justice programs that MCC supports through IJC:

MCC Manitoba still provides about $200,000 to IJC, with the plan of gradually decreasing that amount by 5 percent over seven years and then reviewing where to go from there. “Our intention is to broaden the support base and invite other denominations to join,” said Rempel. “The United Church and Evangelical Lutheran Church of Canada have already become members of IJC.”

Each store was given a refurbished bicycle to raffle off during Janzen’s visit.

“The bicycle is symbolic of the network of MCC’s restorative justice programming,” said Janzen. “Three different groups came together to donate and get the bicycles ready. The thrift shops donated the bikes; a group at Canadian Mennonite University, Sanctoral Bicycle Co-op, rebuilt the bikes; and a company in Winnipeg stripped and repainted them.”

This is the second year that Janzen has donned his cycling gear and hit the highway to raise awareness in communities about the local work that MCC is engaged in.

Last year, $55,000 was raised from this event. This year, Janzen is anticipating raising at least that much again.

Janzen began his bicycle tour in Brandon, where the thrift shop had just suffered a fire that caused significant smoke damage to the building and all of its merchandise. In Portage, Janzen was there to help celebrate the store’s expansion.

The longest stretch of the tour was the trip to the thrift shop in Riverton, 135 kilometres north of Winnipeg.

But Janzen said he was undaunted. “This is an energizing event. It gives me great energy for the rest of the year. It gives me opportunity to combine my passion for cycling with my passion for my work,” he said as he mounted his bike and headed off to Winkler. 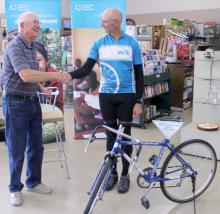